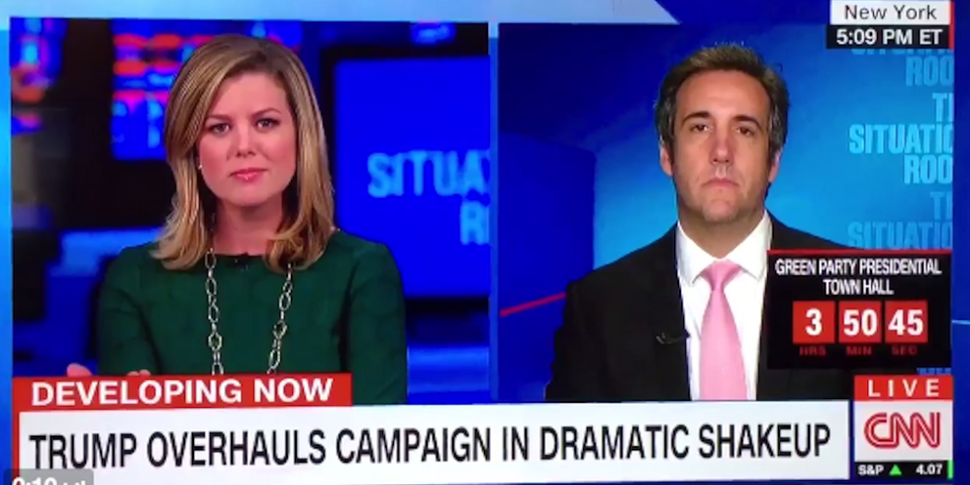 Donald Trump lawyer Michael Cohen became an instant viral internet sensation with his bizarre appearance on CNN in which he awkwardly responded ‘says who?’ to a reporter’s question about the Republican candidate’s woeful poll numbers.

Now Cohen is striking back by claiming that the Donald’s standing with black leaders shows the pollsters are missing big chunks of support for the mogul.

“When they say that Donald Trump has a 1 percent favorability amongst the African-American community, I know from my own interactions that that number is absolutely and unequivocally inaccurate,” Cohen told Yahoo News. “I speak on a weekly basis to more than 100 African-American Evangelical preachers who are all committed to ensuring Donald Trump becomes the next president of the United States.”

Cohen, a lawyer for the Trump organization, went viral for all the wrong reasons after the cringe-worthy kerfuffle with Brianna Keilar.

When the anchor stated that Trump’s numbers were down Cohen replied, “Says who?”

“Polls. I just told you. I answered your question.”

As of Wednesday, the New York Times reports that Hillary Clinton has an 87% chance of winning the presidency. The latest NBC News SurveyMonkey Weekly Election Tracking Poll has Clinton leading Trump by 9 points-50% to 41%.

In the interview with Yahoo, Cohen bragged about “unraveling” Keilar and claimed he “controlled the interview.”

“I was shocked at the length of the silence as she stumbled to think of an answer,” said Cohen. “And when she did come up with an answer, it was so generic it could have applied to anything.”

Watch the discomfort in all its entirety below: