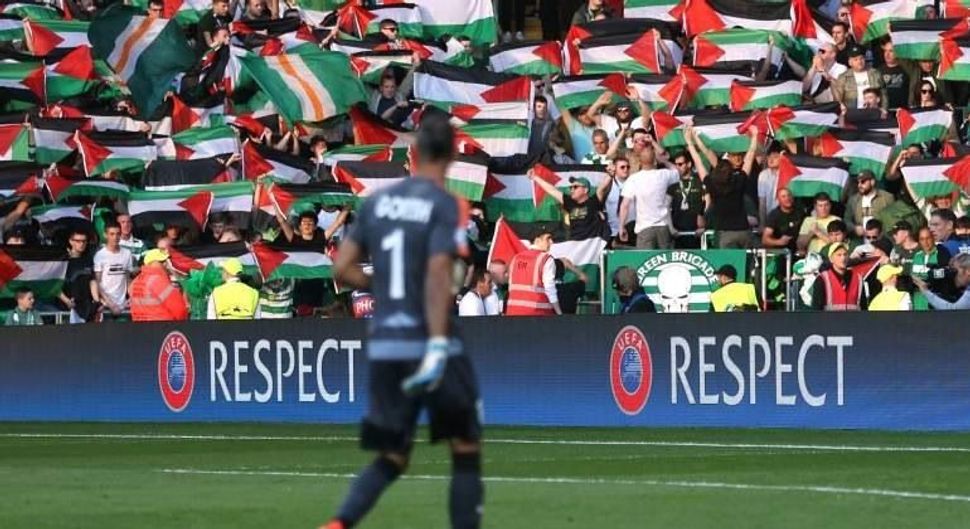 Scottish soccer fans held up Palestinian flags during a Champions League qualifying match against an Israeli team in Glasgow — the ninth incident of anti-Israeli protests during a sporting match in the past five years.

The protest came as Celtic, the champions of Scotland’s premier league, defeated Israel’s Hapoel Be’er Sheva, 5-2. The teams will play again in Israel with a spot in Europe’s premier club tournament on the line.

Celtic Fans for Palestine, a pro-Palestinan Facebook community , organized the boycott by posting an event ahead of the match entitled “Fly the flag for Palestine, for Celtic, for Justice.” 1,500 people indicated that they were interested in participating.

“In support of the Palestinians we Celtic fans invoke our democratic rights to display our opposition to Israeli Apartheid, settler – colonialism and countless massacres of the Palestinian people,” the event organizer wrote. “…we stand for justice, for freedom and end to all forms of racism and oppression.”

The Union of European Football Associations does not allow any form of political expression during a sporting match. The Celtic club was perviously fined more than $20,000 for Palestinian flag waving during a game in Reykjavik two years ago.

“You celtic fans have warmed hearts around the world. What a beautiful gesture you made.” one wrote. “You have done a great thing at a vital time. Good on you all.”