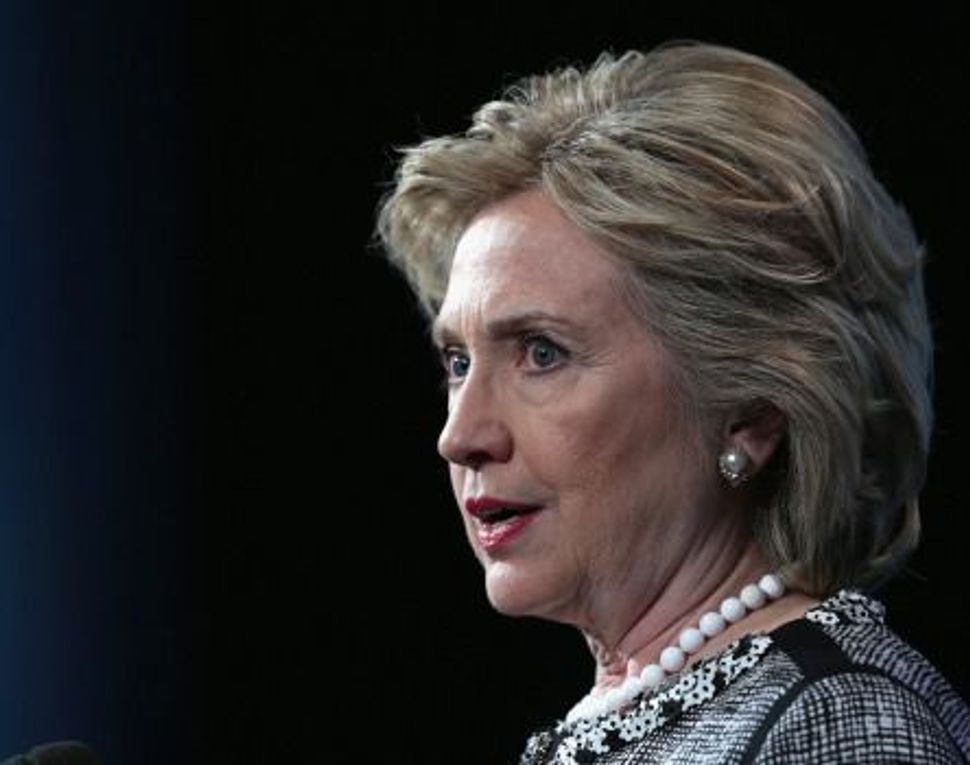 These numbers, from an internal poll conduct by an outside group supportive of Clinton, indicate that Clinton’s approval ratings among Jewish voters are lower than those of President Obama four years ago, when he was running for re-election against Republican Mitt Romney. Furthermore, the survey found that Clinton was polling worse among Jewish voters than Vice President Joe Biden, former president Bill Clinton, and Bernie Sanders, though the Jewish senator from Vermont also registered strong disapproval ratings.

One Jewish Democratic activist called the numbers “shocking” while noting that these approval ratings only represent Clinton’s starting position, not her current standing among Jewish voters.

Democratic sources said the numbers indicate “very soft support” for Clinton in the Jewish community in the stage of the campaign before Sanders ended his campaign and the Democratic convention, which was widely considered a success. But the sources noted that as disappointing as Clinton’s numbers may have been, Donald Trump’s were even worse. According to the poll, Trump was widely disliked by Jewish voters, with 63% viewing him negatively.

And it is also likely that she has consolidated her support among Jews since the spring. Polls show rising support for Clinton among several key demographic components of the Democratic base, including black and Latino voters, suggesting that Jewish Democrats may have also come around to support her.

The internal poll comes as a surprise mainly due to the feeling many Jewish political experts share that 2016 will be a landslide year for Democrats among Jewish voters. “I think that with Donald Trump, Republicans will reach an all time low,” said Ira Sheskin, an expert on Jewish demography and politics from the University of Miami. “If I’d have to guess, I’d put it at 90%.” This may very well be the case, but, based on the results of the May poll, such a landslide will be attributed not only to Clinton’s positive standing among Jewish voters, but also to the strong dislike they feel toward her rival Trump.

In the poll, Clinton won favorable ratings on domestic issues, such as social security, healthcare, women’s rights and religious freedom. She was also viewed positively by Jewish voters when asked about her judgement in international crisis situations and whether she has the temperament suitable for a president.

But on questions relating to support for Israel and to dealing with Iran, Clinton’s numbers were almost equal to those of Trump. The Republican candidate fared just as well as Clinton on the issue of conducting the war against ISIS.

Clinton’s approval numbers among Jewish voters are, in fact, way better than in the general population. Recent polls show 53% of Americans hold an unfavorable view of Clinton, while only 42% see her favorably. And while at least one Jewish activist described Clinton’s favorability as “underperforming,” pollster Jim Gerstein said that “In this environment, anything in the mid 50% and above is considered good.”

There are several mitigating factors that could explain, to a certain extent, Clinton’s relatively low approval rate among Jewish voters at the early stages of the campaign. The poll took place two months before the Democratic convention which gave Clinton a significant boost. It was also done before Trump experienced a rapid decline in support in the past month following his controversial remarks on the role gun owners may play in blocking Clinton, his public criticism directed at a family of a Muslim-American fallen soldier, and his suggestion that Russia should hack Clinton’s emails.

For the Jewish community, negative feelings toward Trump were fueled last month following his decision to double down behind his campaign’s decision to run the “Star of David” ad which was condemned as containing anti-Semitic undertone.

Clinton supporters also noted that the poll was taken at a time when Sanders, Clinton’s Democratic rival, had yet to concede the race and was drawing some support among young Jewish voters. Since, they argue, all factors had turned in Clinton’s favor.

“It was a net positive for Hillary since May and a net negative for Trump,” said a Democratic Jewish insider with knowledge of the poll data,

There are no available polls to asses Clinton’s current standing with Jewish voters.