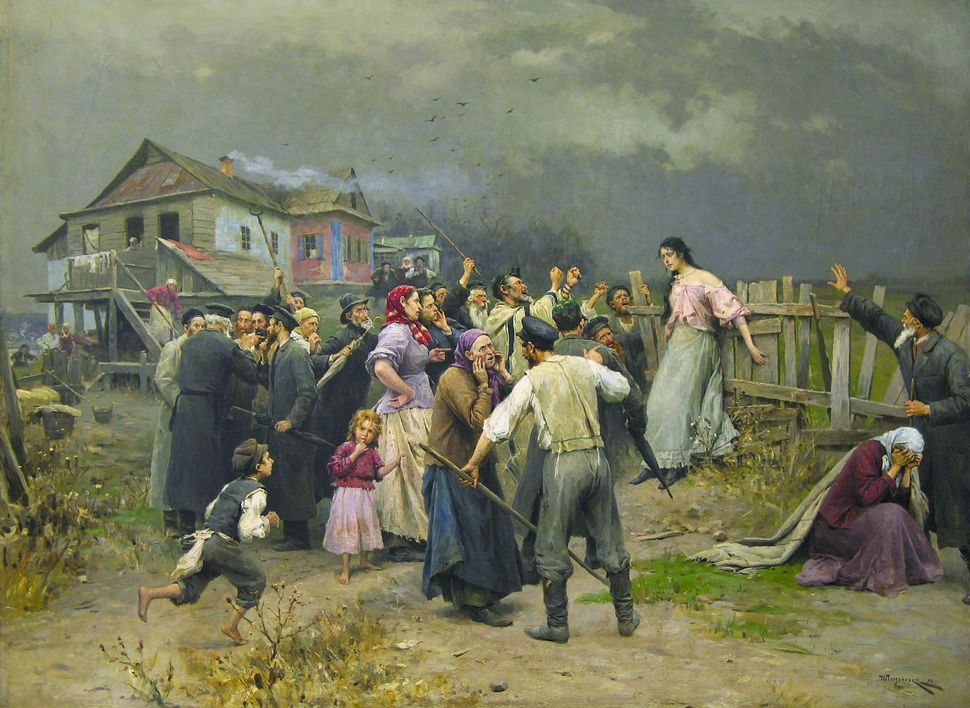 KIEV — No Jewish visitor to Ukraine’s National Art Museum can pass this painting without stopping to look.

A Jewish woman is being assaulted, not by anti-Semites but by a crowd of angry Jews. Pressed to the fence by the mob, her hair is undone, her blouse is ripped, her eyes horrified. The rabbi is shouting at her; bearded men are holding sticks, ready to strike her; one of the assailants has a stone in his hand. A woman identified by art scholars as her mother is crying, hiding her face in shame, and her father, gesturing next to his spouse, is publicly disowning his offspring.

What has she done?

The painting is titled “A Victim of Fanaticism.” And the guide at the National Art Museum explained to me that the 1899 painting, based on a real event, depicts the fate that befell a young woman who dared to marry a non-Jew.

The artist, named Mykola Pymonenko, the guide said, read about the incident in a newspaper that allegedly told the story of a Jewish woman from the town of Kremenets, in Western Ukraine. The woman was hospitalized after Jews in the town assaulted her for falling in love with a non-Jewish man and trying to convert to Christianity to marry him, according to the guide. The woman was then kidnapped from the hospital and was never seen again, she said.

This was not the fate that I remembered befalling little Chavaleh in “Fiddler on the Roof.” In my mind’s eye I could still conjure the heartrending scene of her father, Tevye, conflicted, searching his soul, when she informed him that she wished to marry Fyedka, the young Ukrainian Christian peasant who had protected her when his friends began harassing her. In the end, Tevye decided this was beyond the pale and warned her angrily that she would be dead to her family if she insisted on marrying Fyedka.

Still, nothing suggested that the mild milkman, or anyone from his shtetl of Anatekva, would actually harm Chava physically.

But when I saw the painting, I instantly remembered another story — one I heard from a Ukrainian librarian about a month prior to my museum visit. As she walked with me to the Jewish cemetery in the town of Hmelnik, the librarian, who was not Jewish, told me that, a long time ago, Jews used to kidnap Jewish women who wanted to marry non-Jewish men. They would bring them to the catacombs, where they were left, without food or water, to die. No matter how hard the Christians tried to hide the Jewish woman, the Jews would kidnap her, the librarian said.

When I heard this story, I thought that it must be an anti-Semitic myth. But still, into the corner of my mind crawled a question about the origins of the custom of reciting the Kaddish for a woman who married a non-Jew.

Seeing “A Victim of Fanaticism” at the museum, I wondered once again if assaults by the Jewish community on Jewish women really did take place. Or did Pymonenko, a non-Jewish artist, exaggerate the truth?

At the beginning of the 20th century, “A Victim of Fanaticism” became popular among both Jews and non-Jews, said Eugeny Kotlyar, a professor at the Kharkiv State Academy of Design and Arts in Ukraine who wrote a paper about this work of art. It was printed on postcards, and its reproductions were advertised in secular Zionist magazines tilting against Orthodoxy, he said. It was so popular that the artist repainted it two more times. That’s why “A Victim of Fanaticism” is also on display at museums in Kharkiv and in Dnipropetrovsk.

“The artist is Ukrainian. He was interested in justice. He was touched by the subject,” Kotlyar said. “No Jewish artist would paint something like that, because it was taboo.”

Acquired by the museum almost 100 years ago, the painting has remained on display under the Soviets, and still today — because it fits every political regime, Kotlyar said.

But did the event really take place?

Before he painted “A Victim of Fanaticism,” Pymonenko traveled to Kremenets, where he interviewed residents and made sketches, Kotlyar said. But all we know about the event itself comes from his memoir of his wife, Alexandra Pymonenko, who wrote:

“Pymonenko read in a newspaper that in Kremenets the Jews persecuted a Jewish girl who converted to Christianity, and even wanted to stone her. This Jewish fanaticism shocked him and he decided to make a painting on this subject. He traveled to Kremenets to clarify the story.”

The National Art Museum of Ukraine does not have the newspaper that inspired the artist, said Olga Jbankova, a senior researcher at the museum.

She said that some details visitors hear from the museum guide are actually not confirmed.

“It’s possible that these are legends. It may have been the artist’s fantasy,” she said.

Yet though distinct from beatings or killings, kidnappings of Jewish women who wanted to marry non-Jews did happen.

Nadia Lipes, who runs a Jewish genealogy business in the Ukrainian capital, said she has come across at least three criminal cases in the Kiev regional archive filed by women who had been kidnapped. One such case, from the 19th century, involved a Jewish woman who wanted to convert to Christianity. She complained about “being held against her will at her father’s home,” Lipes said. She didn’t know the woman’s age.

In the Russian Empire there were no civil marriages, and converting to Judaism was a criminal offense, Lipes said. So if a Jewish woman fell in love with a non-Jewish man and wanted to marry him, the only way was for her to renounce her faith so that a priest could marry the couple.

Natan Meir, director of Portland State University’s Harold Schnitzer Family Program in Judaic Studies, also recalled coming across cases in Kiev state archives that described a Jewish teenager who was kidnapped by her family after she ran away from home to convert.

“The Jewish community was accused of kidnapping her and bringing her back to her hometown. The government was investigating the situation,” he said.

Similar kidnappings are also mentioned in Jewish sources. There is even a Baal Shem Tov story about it, said Boleslav Kapulkin, spokesman for Chabad in Odessa, Ukraine, referring to the founder of the Hasidic movement. In the story, when the Baal Shem Tov heard about a Jewish girl who wanted to be baptized, he “went there immediately and took her away from those priests,” Kapulkin said.

“Probably she’d be sent away to another relative, so she’d come to her senses,” Kapulkin said. “Kidnapping with the goal of killing or beating, that kind of thing didn’t happen. But to kidnap in order to save a Jewish soul — it happened.”

He said that men were generally not kidnapped, but “runaway daughters” may have been taken back by their relatives.

“But it wasn’t a regular practice,” Kapulkin hastened to add. “I can probably count these stories on the fingers of one hand.”

Cases of violence — and murder — against Jewish converts to Christianity also show up in press accounts of the time.

Emory College history professor Ellie Schainker, who researched the topic for her forthcoming book about converts from Judaism in imperial Russia, said she found about a dozen Russian newspaper articles and transcripts of court cases from the late 19th century describing violence, kidnapping and even murder that the Jews allegedly perpetrated against converts — most of whom were women.

“There are definitely stories about Jewish converts who were murdered,” she said. “There were cases where converts said there were attempts at their life.”

But Schainker cautioned that allegations blaming Jews for the murder of converts were not always supported by clear evidence.

In one newspaper article from 1877, for example, a pregnant woman who had converted to Christianity was found dead in a burned-down inn, with signs of strangulation, Schainker said. The newspaper concluded that Jews must have killed her.

“I don’t discount that there were cases of violence,” Schainker said. “But I try to separate out individual acts versus a narrative of Jewish behavior.”

She urged that old news accounts be read with caution, even if they seem neutral, particularly because they evoke age-old blood libels. “A lot of what stories [do] is form a narrative about Jews – they say – ‘Jews kill converts, Jews ritually murder converts.’”

As for the “Victim of Fanaticism,” Schainker was unable to find the original newspaper article that spurred the artist’s interest. Despite this, Kotlyar said the story about Jews wanting to stone the woman in the famous painting may have been true.

“Where did this custom of stoning women come from?” he asked rhetorically. “As much as we want to look at Jewish history separately from Arab history, we share a common history, a common cultural base. In very Orthodox areas, I don’t exclude the possibility that women may have been stoned.” When a Jewish woman married a non-Jew, Kotlyar stressed, “it was considered to bring shame on the family.”

According to Meir, the Portland State University Jewish studies professor, even the story about women being taken into the catacombs might not have been a myth.

“We have stories of the Jewish community arranging for people to be killed,” he said. “It wouldn’t be beyond the bounds of possibility for that to have happened.”

Meir observed that halacha, or traditional Jewish religious law permitted putting to death an informer or someone “in cahoots with the Christian authorities.”

In societies rife with anti-Semitism, “the sin of informing was considered a great damage to the existence of the Jewish community itself [because] the informer would bring the internal secrets of the community to the authorities,” he said. “The Jewish community might do anything – because it was so important to keep that kind of person in check. Community leaders permitted non-judicial executions.”

At Ukraine’s National Art Museum, Jbankova said no one ever complained about the work of art. Quite the opposite: “When it was not on display, people asked, ‘Where is that painting?’” Jbankova said.

But Meir said he wouldn’t be happy to know that it is one of the only depictions of Jewish life at the museum.

“I’d want to speak to the director of the museum. I’d say you need to do a better job of representing the history of Jews in Ukraine,” he said. “At the very least, there should be a plaque next to it, so that people don’t think it was standard practice for the Jewish community to abuse their members.”