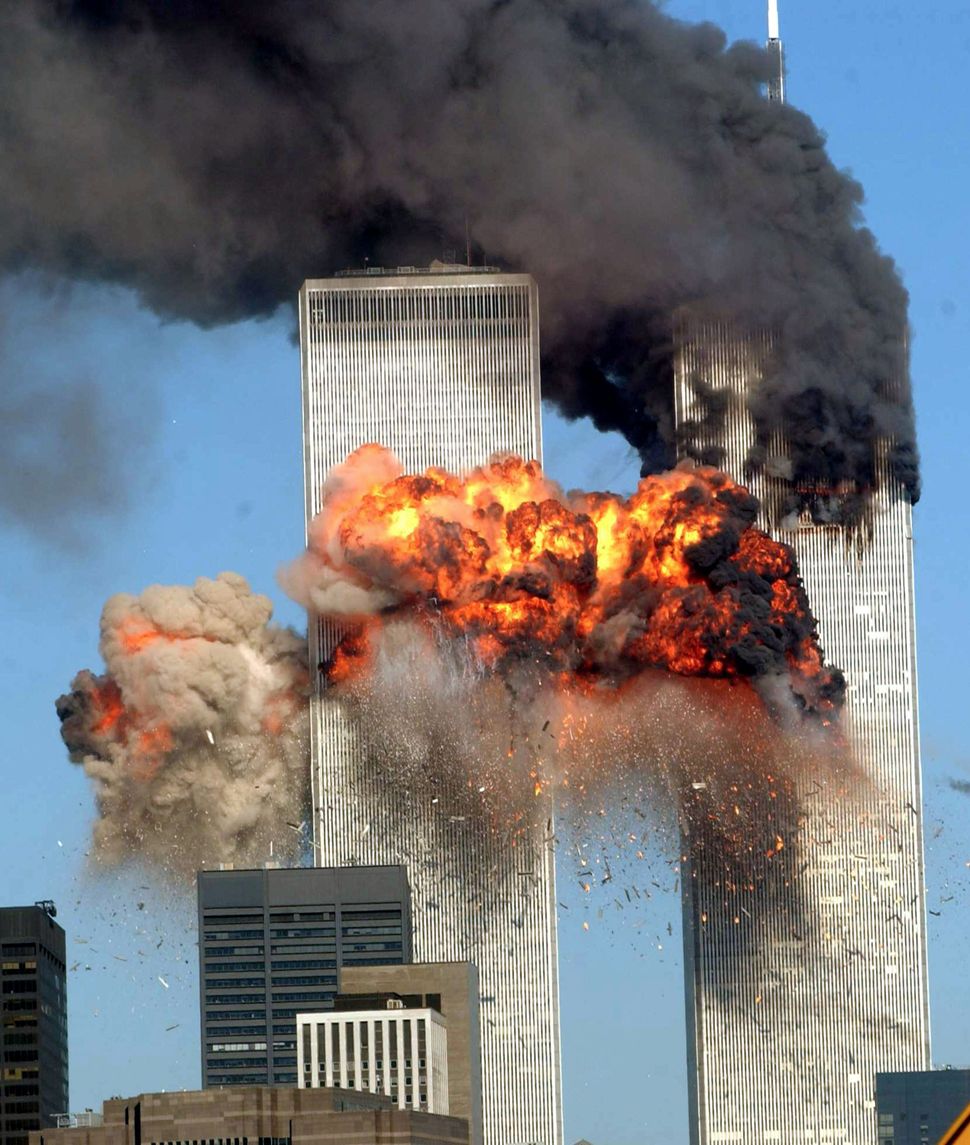 Suddenly, America was at war. It was a war that Americans had been watching for years from afar, a shadowy war of sneak attacks by invisible terrorists on busy city streets in exotic, far-off countries. Now it had come home to American soil. Suddenly, it seemed, the Middle East was here, and everyone was vulnerable.

In a coordinated attack whose sophistication caught America off-guard, teams of terrorists hijacked four civilian airliners — all of them California-bound and loaded with jet fuel — and flew them headlong into some of the nation’s best-known and most crowded office buildings. The death toll appeared all but certain to exceed the toll of any single day of human violence since the end of World War II.

“This changes history,” said Kenneth Jacobson, associate national director of the Anti-Defamation League. “All of the fantasy fears that people had, things that were very distant from reality — now they’re here. And everything that the government does in the future will be in the light of what happened today.”

Tuesday’s attacks were, for lack of a better term, this generation’s Pearl Harbor — a paradigm-shifting event signaling an unprecedented era of threat, conflict and national sacrifice. Unlike Pearl Harbor, however, the attacks were not directed against uniformed troops in the Pacific, but against ordinary civilians, men, women and children, going about their business in the heart of America’s nerve centers. And, unlike Pearl Harbor, the enemy was all but invisible — a shadowy, phantom-like force whose identity could only be deduced.

“I am convinced that people will start listening to those of us who for years have tried to warn the world against the scourge of terrorism,” said Elie Wiesel, the Nobel laureate chronicler of the Holocaust.

“This has to end our sense of invulnerability,” said Mr. Dershowitz. “Mainland America hasn’t been attacked since 1812, when the British invaded us.”

As it was in the War of 1812, the White House was evacuated this Tuesday. So were the Pentagon, the State Department and the CIA. All civilian aviation in the nation was grounded, for the first time ever. Sporting events and other recreational activities were canceled. Never before had America been so crippled by attack or fear — not by presidential assassination, world war, or the 13-day flirtation with nuclear Armageddon during the 1962 Cuban Missile Crisis.

Jewish communal leaders said the attacks were likely to increase Americans’ sense of identification with Israel and the daily fears Israelis live with. If reactions along the streets of lower Manhattan in the hours after the bombing were any indication, then those leaders were onto something.

All around New York in the hours following the attack, New Yorkers could be seen shaking their heads as they stood on the city’s sidewalks, watching the cloud that hovered over the wreckage and listening to radio reports of Palestinians in the West Bank cheering the attacks. “This is why the Israelis can’t talk to them,” muttered one lady, after hearing the news. “There’s no reasoning with people like this.”

One Hispanic-looking woman, questioned by the Forward as to the cause of the attack, screamed, “The f—- Arabs! It’s because America supports Israel!” Asked if this made her question that support, she shouted: “No way!”

The opposite message made its way quickly enough through Internet chat rooms, where some participants were quick to blame the disaster on America’s support for Israel. And the cheering Palestinian throngs in the West Bank also made clear their belief that this attack was, at least in part, vengeance for their suffering at the hands of the Israelis.

While leaders of several Jewish organizations rejected the link, they worried that a backlash against Israel could gain ground in the coming weeks. It’s a legitimate concern, said one Midwestern newspaper baron.

“In our hedonistic culture, if we suddenly have an oil embargo or people are told their lives have to change, and the situation is connected to this country’s support of Israel in the Middle East, it’s a fair question to ask if support will remain firm or will it sag,” said John Robinson Block, editor in chief and co-publisher of the Toledo Blade and the Pittsburgh Post-Gazette. With its crumbling civic bonds and myriad social ills, today’s America has yet to prove that it can muster up the resolve and sense of purpose that marked the country’s World War II generation, Mr. Block said.

A veteran newsman with a history of sympathy for the Palestinian cause, Mr. Block nonetheless said this is no time for America to back away from its major ally in the Middle East.

“We have supported Israel since its founding in 1948,” Mr. Block said. “And, no matter how you feel about that support, if we were to alter or reduce it because of this, what would that say about the United States? Who would ever respect us again?”

Many observers were predicting openly that the week’s events might prod people in Europe and America at last to accept what Israel and its friends have vainly argued for years: that terrorism threatens not only Israel and the Jewish people, but Western democracies in general.

“It’s a wakeup call that we can either wake up to or not,” said Daniel Pipes, director of the Middle East Forum, a right-leaning think tank in Philadelphia. “This was merely physical, things falling into other things. The future holds biological terrorism, which can endanger a substantial portion of the entire country. The kind of planning and execution showcased today suggests the kind of operation that enemies of the United States can mount. The physical destruction of this sort is just very minor in comparison.”

The key question, Mr. Pipes said, is whether American leaders are prepared to adopt a war-like mentality, after decades of mistakenly treating terrorism as a strictly criminal problem. “We’ve responded by throwing our finest policemen and lawyers at it. But this is war,” Mr. Pipes said. “It’s a mentality. It’s an understanding. It’s seeing yourself as being targeted, not by a criminal gang, but by states and organizations.”