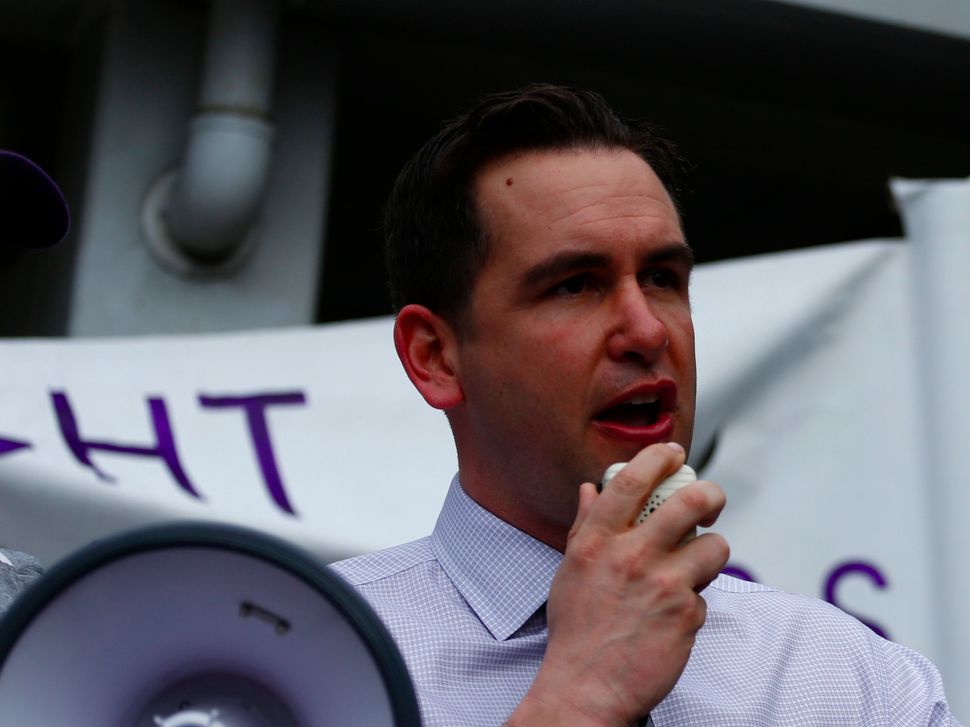 Mayor Steven Fulop – whose uncommon last name hints at his Romanian-Jewish background – is the Jersey City mayor who has become closely connected to the city’s sizable Muslim community. It was Fulop who led a press conference this year denouncing Donald Trump’s claims about watching Jersey City Muslims cheer on 9/11. With the Presidential election edging closer, and his own future as a gubernatorial candidate in play, Fulop’s also been encouraging his Muslim constituents to get more involved in the political process, and his local outreach is making national headlines.

Under his leadership, Jersey City has become one of the state’s fastest-growing municipalities, and its most politically progressive. It’s also the most diverse city in the nation, according to a 2015 report, with nearly 40% of residents foreign-born.

Politics is Fulop’s third career, after stints in financial services and the military; as a Marine, he served in Iraq. Fulop made an unsuccessful bid for Congress in 2004; a year later, he won a seat as the youngest member of Jersey City’s legislature. In 2013, he became Jersey City’s mayor. The Forward spoke to Fulop from his office, just weeks after his wedding to physical therapist Jaclyn Thompson, who converted to Judaism.

A lot of people seem surprised that Jersey City’s sizeable Muslim population has thrown its support behind a Jewish mayor. How did that develop?

As the grandson of Holocaust survivors, and guy who went to Orthodox day school, the first guess of most people wouldn’t be that these communities would be among my biggest supporters. But we’ve built a terrific relationship over the last 12 years. Though the Muslim population’s diverse, we have two main immigrant groups. Pakistanis were the first to support me. We also have a huge Egyptian community. I’ve spent a lot of time with them, over holidays, in mosques. They’re a great part of the political process.

Considering their numbers, it also seems surprising Muslims weren’t made to feel included before you came along. Was that the case?

This community stuck to itself, and no one had ever thought, “Hey, let’s engage.” It’s a community that’s never had outreach made to it. I was running as an outsider. They had basic concerns and reached out. They consistently come out in massive numbers in support of me politically. And there have been good outcomes all around. We replicated New York City in closing schools on Eid. We changed parking around some of mosques to facilitate 2pm prayer services. Otherwise, it’s the day-to-day blocking and tackling of constituent issues.

What kind of power does the Muslim community have as a voting bloc, especially in an election year like this?

The level of activity you see is significantly higher than it’s ever been. You always hear rhetoric and dialogue about the importance of getting involved in elections, but it’s usually more of an October conversation in immigrant communities. What’s changed is that Trump has created more awareness and involvement. Now, it’s an April-May-June conversation.

Did you understand the community when you started? Were there misconceptions?

When I first ran for City Council, I got the best lesson I’ve ever had in government. A representative of the Muslim community invited me to a mosque for a meet-and-greet. I had no idea what to expect; before that, I hadn’t spent any time in a mosque. Anyway, they asked about things any community or parent would ask about – schools, police, jobs.

I get up and think it went pretty well. The imam approaches me and says, “Fulop … Strange last name. What is it?” I paused. I felt I knew what he was asking. I don’t know why, but I said “Eastern European”. I should have said “Jewish”. If my grandmother had heard me, she would have rolled over in her grave. Anyway, two weeks later, it was Purim. That same imam called to wish me a good holiday. That was a lesson. I was stereotyping. In reality, he was thinking nothing like what I thought. I value this community because it’s made me a better person. The relationships have opened my eyes to different people, culture, even food, and I appreciate it.

Your parents emigrated from Romania, and your grandparents survived the Holocaust. How does their experience affect you?

I’m certainly more conscious of immigrant experience. I’ve seen firsthand the challenges my parents, and family, have experienced with regards to culture and civic involvement. My family was involved politically in that they were active voters, but not otherwise. That’s consistent with a lot of immigrant communities.

To involve immigrant and first-generation communities in civic life, we have to do a lot more outreach. From my own family’s standpoint, I can recognize how self-conscious my parents can be of the fact that they’re immigrants, have an accent, come from a different place. They’re very aware of it even when others don’t seem to care. I think that’s the experience of a lot of immigrants as well.

Did your grandmother talk about her experiences during the war? Survivors sometimes stay silent until the end.

The only time my grandmother spoke about the Holocaust – and keep in mind her daughter and mother died in the gas chamber – was in a Shoah Foundation interview. It was the first time in my life I heard her talk about it and saw her showing pictures.

My parents didn’t talk about the immigrant experience. They owned a deli in Newark. They worked very hard. They never went back to Romania; those weren’t the best memories.

You worked in their deli in high school. What did that teach you?

The work ethic I have today is a byproduct of those experiences. Working in a deli is tough. My dad would leave the house in Edison at 3am, close the deli in the evening, and get home by 6:30pm. If you’re not there to pick up newspapers at your deli at 3:30am, somebody else is. My father valued that work ethic. He knew the value of a dollar. He appreciated what this country has to offer. For most of my growing-up, vacations were domestic, because my father would always say that this was the best country, with the best roads and the best infrastructure, so why would he want to leave? That perspective came from his own life, but the immigrant experience and values influenced me.

How would you characterize your management style?

Hire terrific talent. Give them a good deal of wiggle room to make decisions. My staff would probably laugh and say I’m too involved, but it seems like things are moving in a positive direction. I’d say we’re blessed with a good team, good resources, and we’re working well together.

Your name’s on many short lists of possible New Jersey gubernatorial candidates. What are your plans?

Well, we wouldn’t declare until after the Presidential election. For now, I’m still looking at the mayor’s race.