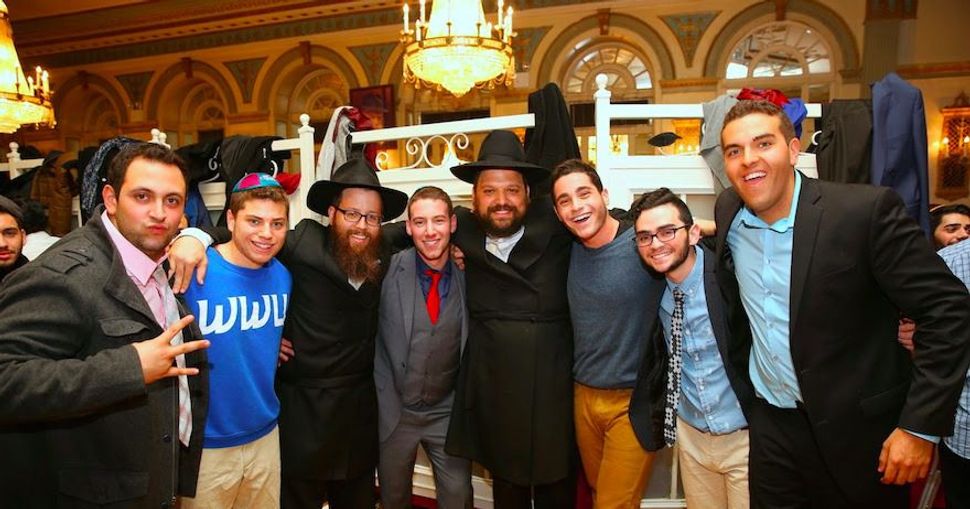 (JTA) — Fifteen years ago, most Jewish college students had one game in town: their local Hillel, which offered a pluralistic, broad approach to Jewish programming.

The Hasidic movement known as Chabad-Lubavitch, present on only 30 campuses before 2000, now has a presence on nearly 200 with its brand of Judaism: aiming to be inclusive and tolerant, but unabashedly Orthodox.

The rabbi and rebbetzin (or rabbi’s wife) who lead Chabad on campus take a central role. Like their movement, which under its late rebbe, Menachem Mendel Schneerson, pursued “outreach” to non-Orthodox Jews the way no other Hasidic group had done before, their goal is not strictly to win Hasidic followers.

Now a study led by Mark Rosen, associate professor at Brandeis University’s Hornstein Jewish Professional Leadership Program, aims to show what Chabad does — and does not do — on campuses across the country.

The survey, drawing from Chabad email lists, garnered responses from 2,400 alumni of 22 campuses. The respondents graduated from college after 2007.

While the campus Chabads provided email addresses, the independent survey was commissioned and funded by the Hertog Foundation, a conservative educational group.

The result? Campus Chabad attendees are mostly non-Orthodox, they didn’t come for the booze and they’re not about to put on black hats.

Chabad’s programs and rituals are run by a haredi Orthodox couple, but their target audience is more religiously diverse. According to the survey, only 11 percent of respondents were raised Orthodox. Most were raised either Conservative (39 percent) or Reform (32 percent). Ten percent had no denomination.

One shared experience of most Chabad attendees was Jewish summer camp: A majority of respondents attended for at least one summer.

The more right wing you are politically, the more you go to Chabad.

One measure that did correlate with Chabad attendance was political ideology. Campuses may have the reputation of being liberal bastions, but the survey found that campus Chabads may be the opposite. Only 16 percent of students with a liberal ideology said they had a “high” level of participation at Chabad, while 59 percent of liberal students had a low level of participation.

Among conservative (small c) students, the numbers were more evenly split. Thirty-nine percent had a high participation level, versus 36 percent with a low level of participation.

Chabad does not have a drinking problem.

If Chabads have earned a reputation of playing loose with alcohol — that is, offering wine and spirits as a lure and a lubricant at Shabbat meals and the like — the data don’t bear it out. Shabbat dinner is the central activity at Chabad — 91 percent of attendees said they had gone to a Friday night meal — but the wine didn’t flow freely. Nearly two-thirds of respondents said alcohol use at Chabad was “not at all” excessive. Only 4 percent said it was — though it was unclear what students consider “excessive” alcohol use.

The survey also found that Chabad rabbis and rebbetzins, despite their own philosophy, didn’t pressure students to become Orthodox. Rather, in the words of the survey authors, any Jewish commandment fulfilled by a student, “even if only performed once, is considered a spiritual achievement.”

This philosophy expressed itself in the survey results. Most respondents said Chabad encouraged religious observance “a little” or “not at all.” Most felt no discomfort at being pressured to be more observant. And nearly two-thirds felt Chabad did not promote Orthodoxy over Conservative or Reform Judaism.

Chabad participants are more likely to believe in God and date Jewish.

Across denominations, a high level of Chabad participation correlated with higher levels of belief in God and prioritizing dating Jews.

Most people who attended Chabad in college don’t go to Chabad now.

Even those who hung around Chabad in college don’t seek out Chabad as adults. Only 21 percent of high-participation students said they have attended Chabad regularly after college. Two-thirds of all respondents said they haven’t sought out a Chabad at all in the past year.