Donald Trump Jr. Emerges as ‘Alt-Right’ Hero Even as Dad Tones Down Rhetoric 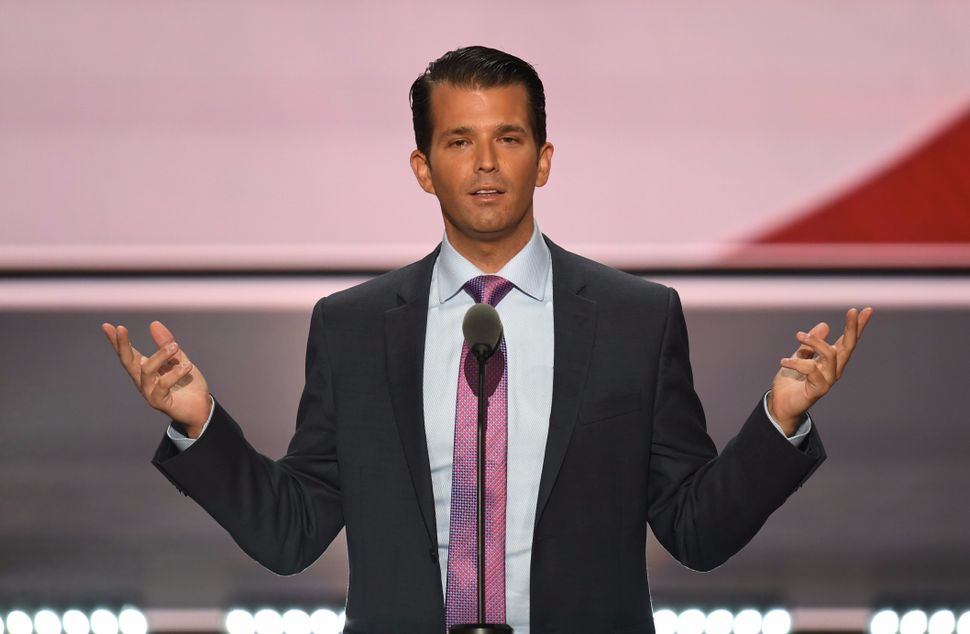 But at the same time, Donald Trump Jr. has stepped up to the plate, directly appealing to the fringe right online and in interviews.

One of the most striking comments came Monday night — and caused a furor online:

The image, which actually drew on older memes, struck many as offensive — both by comparing Syrians to Skittles, and suggesting that opening the door to refugees could be deadly for a country.

Hey @DonaldJTrumpJr, this is one of the millions of children you compared to a poisoned Skittle today: https://t.co/SDSGw0eUIP pic.twitter.com/HuhY9RGvWW

The company that owns Skittles said it “wasn’t an appropriate analogy” to compare people to candy. It turns out the photographer who took the stock image was once a refugee.

Analyzing Trump Jr.’s shift in the Atlantic, the writer David A. Graham said it’s not clear if he is reflecting his own beliefs — or simply seeking to fill a political void.

“The outstanding question now is whether Trump Jr. is a true believer in white genocide or is simply playing one for cynical political purposes, letting the internet’s committed racists know that even if Trump moderates his rhetoric, he still wants their votes.”

But the Skittles tweet isn’t the only time Trump Jr. has signaled to the far right — in the past 24 hours. He also recently shared an article from Breitbart, a right-wing website with the headline, “Western Women Will Be Sacrificed At The Alter Of Mass Migration.”

Europe’s Rape Epidemic: Western Women Will Be Sacrificed At The Altar Of Mass Migration https://t.co/BkguApQqvQ via @BreitbartNews

The Brietbart story declares that the “Western world is dominated by leaders who despise its history” who “wish to extinguish Western culture, and opening the borders is a hell of a good start.”

The language of the article and the tone of Trump Jr.’s meme echo earlier statements from his father.

The older Trump has suggested that President Barack Obama supports terrorists and has also retweeted writers who claim America is experiencing a “white genocide” — the white nationalist belief that intermarriage and immigration are leading to the “genocide” of white people.

Donald Trump Jr. Emerges as ‘Alt-Right’ Hero Even as Dad Tones Down Rhetoric