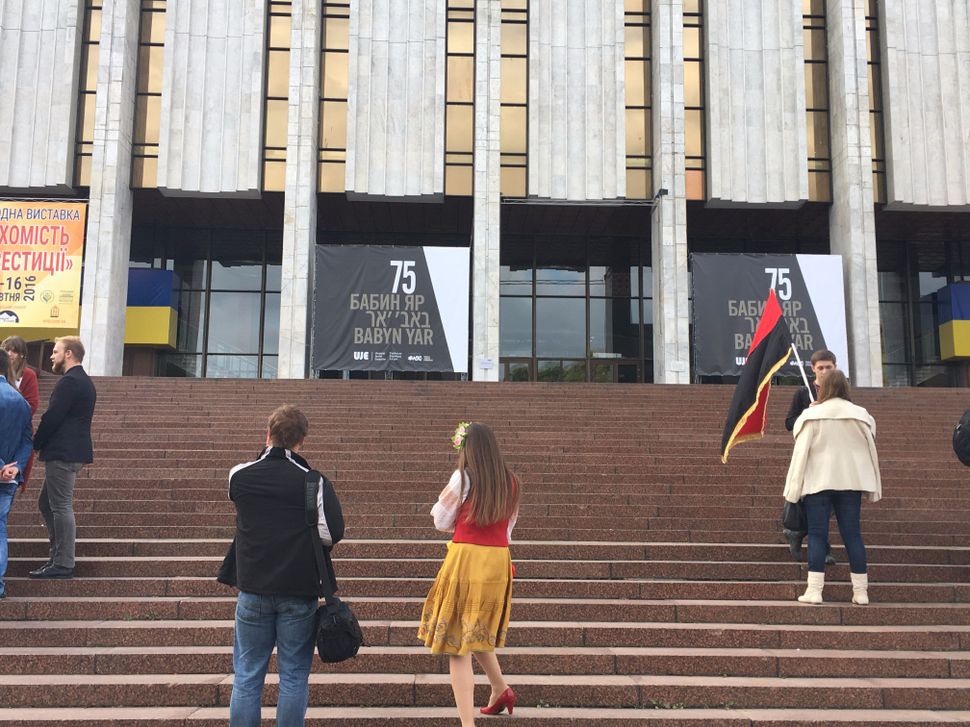 The role of Holocaust education in a country where almost 1 million Jews were slaughtered is a complicated thing when the country in question is in the throes of shaping a fresh national identity and national memory for itself from very raw emotional material; even more so when it’s locked at the same time in a simmering military conflict against Russia, one of its former occupiers along with Nazi Germany during World War II.

At the second day of a conference marking the 75th anniversary of Babi Yar—where Nazis in Kiev shot dead more than 33,000 Jews over two days with help from local Ukrainian collaborators and pitched their corpses into a ravine—Volodymyr Viatrovych, a 39-year-old Ukrainian historian, exemplified all the vexing complexities.

Since 2014, Viatrovych has served as the executive director of Ukraine’s Institute for National Memory. Established by former President Viktor Yushchenko in 2006 and later changed to a research institution in 2010 by ousted President Viktor Yanukovych, the institute strives to reshape the country’s collective memory of events like the Holocaust that authorities consistently misrepresented during the period in which Ukraine was part of the Soviet Union. (Ukraine declared its independence in 1991.) For Jews, Soviet interpretations of Holocaust history—and the mass killings at Babi Yar in particular— were offensive because they never acknowledged Jews as specific targets for wholesale extermination by the Nazis. Under a 2015 law, the Institute for National Memory has full access to all state archives and therefore has carte blanche to interpret them as it sees fit.

The institute, and Viatrovych in particular, have come under fire for obscuring or downplaying the role of non-Jewish Ukrainians in certain mass atrocities against Jews, including pogroms and slaughters during the Holocaust. A particularly damning piece in Foreign Policyaccused Viatrovych of upholding a nationalist agenda by hiding historical truths of Ukrainian complicity in crimes against Jews that cast Ukrainian national heroes in an ugly light.

When asked to explain the institute’s role in objectively discussing the relations of Ukrainian Jews and non-Jews during the Holocaust, Viatrovych acknowledged that “certain nationalist groups participated in the liquidation of Jews, especially in 1941” but added that there were Ukrainians who saved Jews and also bystanders who did nothing.

“We certainly consider it absolutely incorrect when historians or especially politicians only focus on one of those models of behavior,” he said. “Most of all, it is extremely important for us to understand the Soviet-era discourse about World War II. There was only room for Nazi enemies and Soviet heroes…there were no shades of gray or discussions about catastrophes like the Holocaust.” Viatrovych argued that his presence at the conference as a representative of the institute was one way in which his organization was helping to spread awareness of the Holocaust in Ukraine.

But as Ukraine breaks with binary narratives of “Nazi enemies and Soviet heroes,” how will it deal with troubling questions about the deeds of Ukrainian nationalist heroes? And how far will the state go to uphold narratives of Jewish victimhood next to those that glorify Ukrainian independence?

For Iegor Vradii, one of the main organizers of the conference, sponsored by Ukrainian Jewish Encounter, a Canadian group, this is a particularly delicate issue. Vradii is head of the research and museum departments at Tkuma, the Ukrainian Institute for Holocaust Studies in Dnipro (formerly Dnipropetrovsk). Tkuma—Hebrew for “resurrection”—is based in Dnipro’s Menorah Center, built and sponsored by the Lubavitch Hasidic sect and called the “largest Jewish complex in the world.” This put Vradii in the challenging position of presenting Jewish history in Ukraine from an especially visible platform.

In his lecture, “Memory of War or War of Memories?” Vradii noted how traditional frameworks of the Holocaust and Holocaust education often obscure certain narratives that otherwise highlight the true complexity of the catastrophe. To him, the lines between enemies and allies in the Holocaust can be blurry.

Breaking sharply with widespread accounts that depict wartime Ukrainian police units as enemies of the Jews, Vradii offered a striking example of how multifaceted the history of the Holocaust in Ukraine truly is. He told us, “Among the Ukrainian police there could be situations where an officer participated in the execution of Jews and two weeks later, save 20 or 30 Jews. How can we judge him? He is a murderer and at the same time a savior.”