Who is Mark Cuban — and Why is He Getting Death Threats from Trump Trolls? 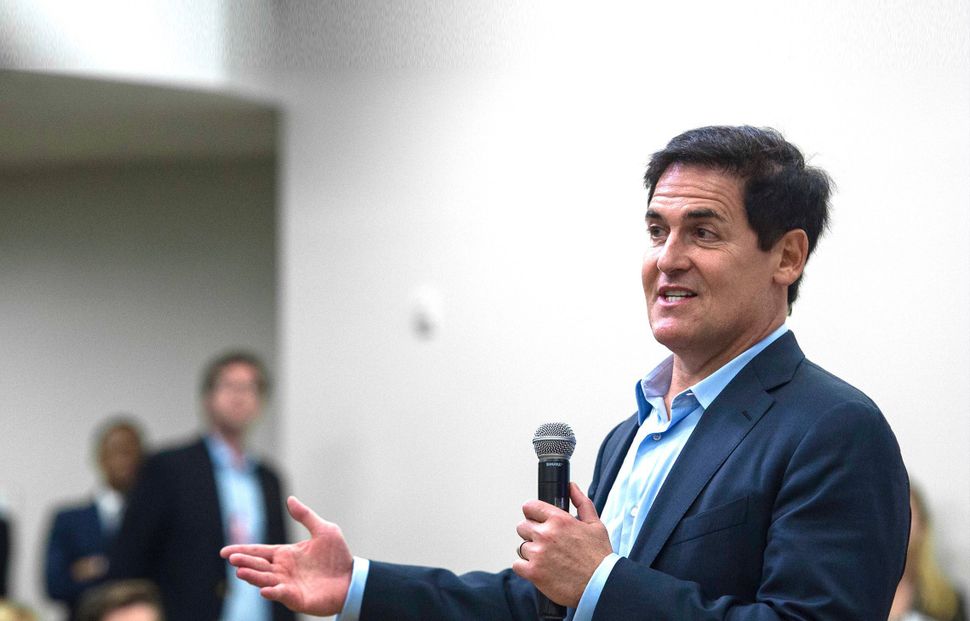 “Unfortunately, we’ve been getting death threats,” said Cuban, “and Trumpians have been trying to hack everything we have, so I’ve had to spend too much time on security and protecting my family. So that’s unfortunate,” Cuban said. “I don’t blame that on Donald — that’s just part of the game.”

Cuban didn’t provide any examples of the kinds of threats he’d been getting — but the vitriol of Trump supporters online has been well documented at this point. To further muddy things, Cuban used to be a big Trump supporter — even saying he wanted to be Trump’s running mate, before switching teams.

Just got a front row seat to watch @HillaryClinton overwhelm @realDonaldTrump at the “Humbling at Hofstra” on Monday. It Is On !

If dopey Mark Cuban of failed Benefactor fame wants to sit in the front row, perhaps I will put Gennifer Flowers right alongside of him!

Who is Mark Cuban?

Cuban grew up in a Jewish home in Pennsylvania, and had relatively humble beginnings, working a range of jobs — bartender, dance instructor, salesperson — before sinking a series of good business deals and establishing his empire.

Cuban was one of the 12 contestants on the 5th season of Dancing with the Stars in 2007. He was pretty good — he stayed on the show four weeks before getting the boot.

Cuban is now owner of the NBA’s Dallas Mavericks and appears on the the reality show Shark Tank. He’s also known for disruptive courtside episodes at basketball games — calling out referees for what he believes to be bad calls.

What led up to the spat?

Cuban had previously said he had a front row seat to the debate, which prompted Trump to announce he would bring own guest — Gennifer Flowers, a woman with whom Bill Clinton has said he had an affair.

Cuban, owner of the NBA’s Dallas Mavericks and star of the reality show Shark Tank, later said that he didn’t actually have a front row seat and just wanted to get a rise out Trump; Trump’s campaign, too, said that Flowers was not actually invited.

“I knew that it would get under his skin and drive him crazy. Mission accomplished,” Cuban told Business Insider. But Cuban did appear in the front moments before the debate’s start, surprising some. “I got tickets because I wanted to bring my 13-year-old daughter, whose birthday it was yesterday,” he said.

Cuban used to be pro-Trump?

Cuban may be among Trump’s fiercest critics now — it didn’t start out that way. He used to be a big Trump supporter.

When Trump announced his candidacy last year, Cuban said he would consider the position of running mate. “I don’t care what his actual positions are,” Cuban said at the time. “I don’t care if he says the wrong thing. He says what’s on his mind. He gives honest answers rather than prepared answers. This is more important than anything any candidate has done in years.”

But something shifted. Cuban endorsed Clinton in July and began lashing out at Trump. Cuban told Fox host Neil Cavuto that if Trump were elected, the stock market could crash again. Trump offered his own retort: telling Fox that Cuban “isn’t smart enough” to comprehend economic proposals. But Cuban couldn’t let it rest. He offered to donate $10 million to a charity of Trump’s choice for sit-down about policy issues. (Trump didn’t take him up on the offer.)

A newly-politicalized (and pro-Hillary) Cuban?

“I’ve been apolitical my whole adult life,” Cuban told Business Insider. “But I think this election’s different, and it concerns me. I just don’t think Donald Trump will be a good president, and I think Hillary will be, could be, a better president.”

Cuban admitted that he once “liked what [Trump] was doing” and that it “was a breath of fresh air until I realized he didn’t have the will to prepare, and that was really big for being president, in my mind.”

Cuban has also waded into another political issue of the moment. He recently announced that he would support his NBA team if they chose to join the growing protest movement sparked by basketball star Colin Kaepernick, who knelt during the national anthem this summer. If any of the Mavericks choose to protest, Cuban said, he and the organization would support them.

Who is Mark Cuban — and Why is He Getting Death Threats from Trump Trolls?