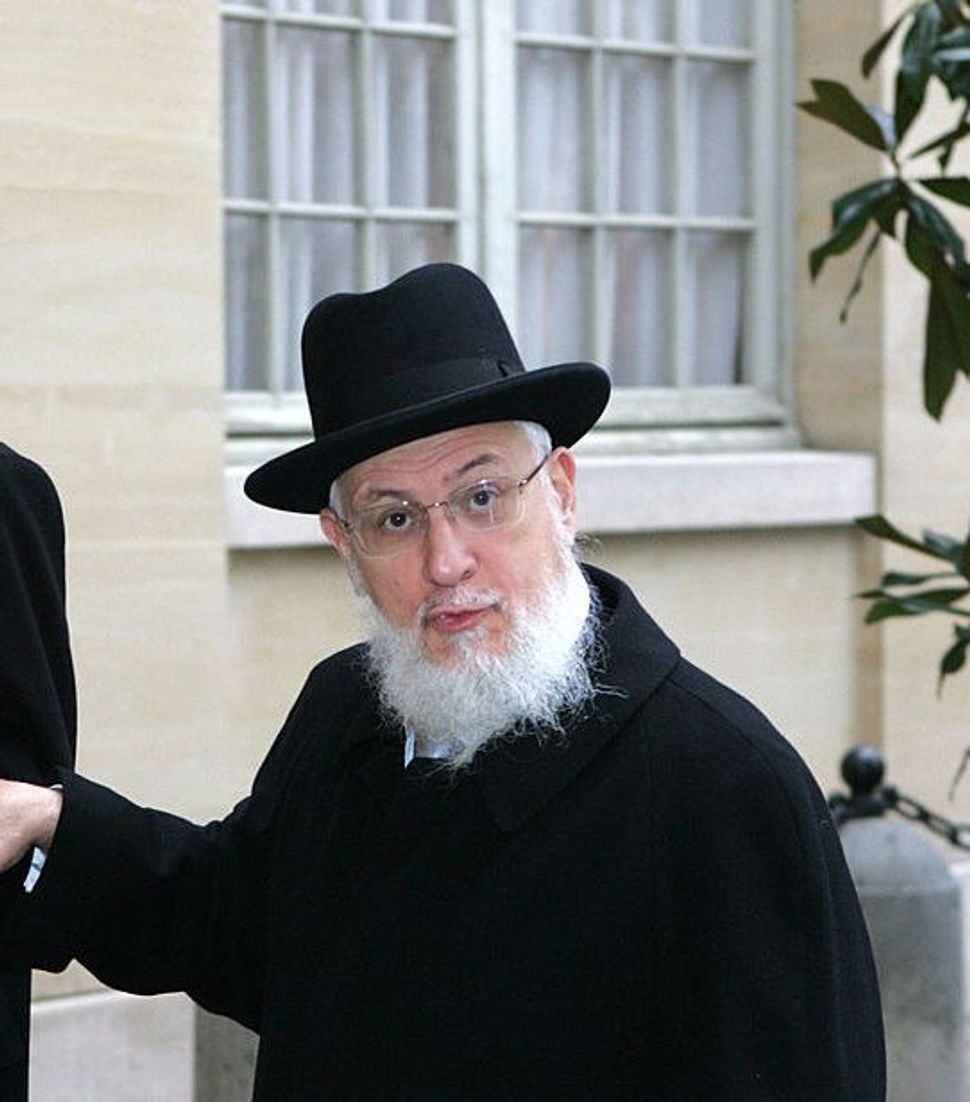 Joseph Sitruk, the former chief rabbi of France who died in September, was a towering figure to his country’s Jewish community. Serving for two decades — between 1987 and 2008 — in the top clerical post, the Tunisian-born Sitruk gained a reputation for his charisma, friendliness to Orthodox and Sephardic teachings and engagement with the secular world. But that legacy might be overwhelmed by controversial remarks he made on homosexuality in June, its aftermath still unfolding when the rabbi passed away.

Speaking on the Jewish broadcaster Radio J, ahead of the annual Gay Pride Parade in Tel Aviv, Sitruk denounced the event as sinful. “The Bible sees homosexuality as an abomination and a defeat for humanity,” he said, in a weekly commentary on that week’s Torah reading. He called the Tel Aviv march “an attempt at mortal extermination” against the Jews and Israel, urging listeners to “hear my call for help and react in a radical way to this abomination.”

Sitruk’s appeal touched a nerve among gay French Jews, many of them rattled by the 2015 attack on Jerusalem Pride, where an extremist stabbed six people and killed one of them. But it also led to a broader conversation and a meeting between the current chief rabbi and an LGBTQ advocacy group.

“What sort of radicalism does the Rabbi Sitruk have in mind? Stabbing to death an innocent teenager, as was done last year in Jerusalem?” said Alain Beit, the head of Beit Haverim, an organization for gay Jews in France, in an interview with community publication Actualité Juive.

France’s Jewish religious establishment has embraced a hard line on the acceptance of gay people. When the country approved marriage equality in 2013, then-Chief Rabbi Gilles Bernheim called the law “a Trojan horse against heterosexuality.” “Marriage is not alone the recognition of love,” he wrote, but also “the institution that fleshes out the alliance of man and woman that leads to the next generation.” While Korsia softened this tone, he opposes the religious sanctification of homosexual unions.

But when Sitruk made his remarks, they drew criticism.

“I disassociate myself entirely from the former chief rabbi after the comments he made, which I strongly condemn,” said Serge Hajdenberg, the president of Radio J, in a statement to the Actualité Juive. He added that the station had never listened to Sitruk’s commentary before airing it, due to the cleric’s stature.

The current chief rabbi tried to defend Sitruk, but even he distanced himself from like sentiments. “I would say that he didn’t realize the consequences of those words, and they aren’t consistent with the idea of humanity that Chief Rabbi Sitruk articulated during his career,” Rabbi Haim Korsia said.

An office initially established by Napoleon, France’s chief rabbi oversees the country’s Central Consistory, an association of synagogues to which most Jewish religious bodies adhere. In recent decades, Orthodox interpretations of Jewish law and practice have tended to predominate.

Last month, SOS Homophobie, an advocacy group for France’s queer community, filed a legal complaint against Sitruk for hate speech. “We can’t let the idea that homosexuality is a form of ‘moral extermination’ stand,” said Gilles Dehais, president of SOS Homophobie, in an interview with the French paper Libération.

Sitruk’s outburst reawakened a somewhat-dormant discussion among French Jewry on the status of queer people.

Following Sitruk’s outburst, Beit met with Korsia for the first time in June, an encounter the latter described as historic, in an interview with the newspaper La Dépêche.

“This is a subject the Consistory hasn’t really advanced on… Taboos remain. Are gay Jews pariahs? Or are they welcome in synagogue, and treated on an equal plane with regard to ritual and temple honors?”