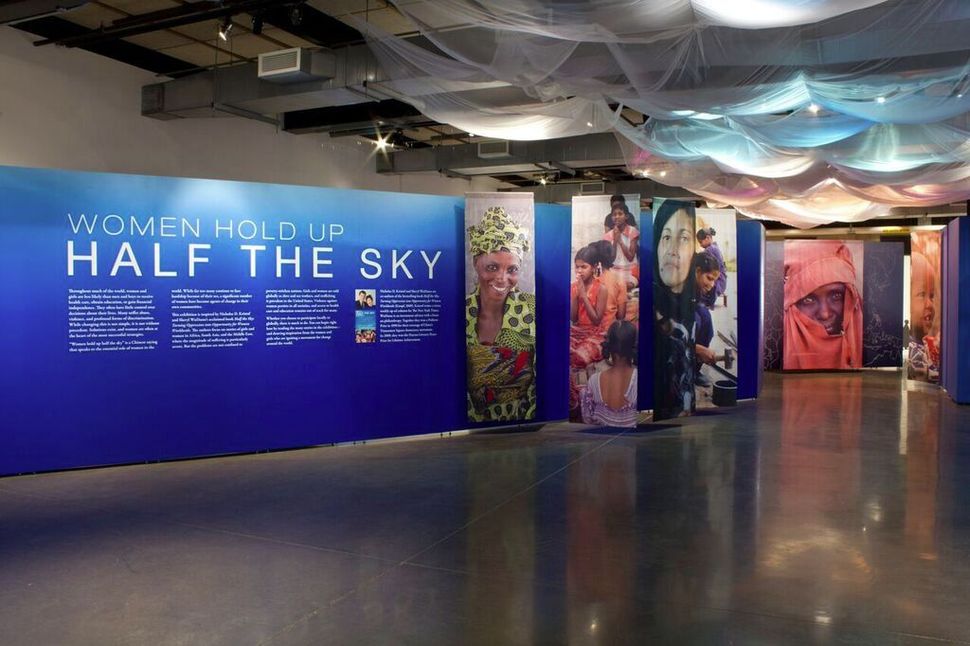 The Illinois Holocaust Museum and Education Center’s current exhibit looks at the challenges poor women face in the developing world, and in Chicago. Image by Aimee Levitt

Like most such institutions, the Illinois Holocaust Museum and Education Center in Skokie boasts an extensive permanent exhibition of artifacts from the Shoah, along with recollections of Illinois residents who experienced or witnessed the atrocities in Europe 70 years ago. But that is only part of its mission.

The other part is to transform the future.

That puts the Illinois museum firmly on one side of the spectrum in the ongoing debate between those who stress the historical uniqueness of the Holocaust—Hitler’s unremitting campaign, even while losing World War II, to search out and exterminate every Jew in Europe using mass industrial techniques—versus those who see it in the context of history’s many other genocides involving other peoples.

But that alone does not make ILHMEC singular. Other institutions, notably the United States Holocaust Memorial Museum in Washington and Holocaust Museum Houston, have also broadened the scope of their exhibitions to include contemporary genocides and human rights violations.

What distinguishes the Illinois museum, says Shoshana Buchholz-Miller, vice president of education and exhibitions, is that it always makes an effort to show visitors ways that they, personally, can take action.

“We’re an education center,” she emphasized. “We always educate people about the Holocaust and offer lessons for the present day.”

The museum’s latest exhibition, “Women Hold Up Half the Sky,” based on the book by Nicholas Kristof and Sheryl WuDunn about the various challenges that women and girls face in the developing world, is a prime case in point. The exhibition, which originated at the Skirball Cultural Center in Los Angeles, marks the first time ILHMEC has featured a show exclusively about girls and women. The exhibition covers three major themes: maternal health and mortality, human trafficking, and gender-based violence. The stories are, for the most part, uplifting, singling out women and girls who overcame terrible situations and then worked to make a difference in their communities.

But it doesn’t stop there. It also connects the exhibit’s accounts of conditions for women in Africa and Asia to the challenges women face in Chicago itself—and offers visitors options for action.

The final wall panel of the exhibit features a list of local organizations where visitors can donate their time, money, and material goods (ranging from toilet paper to CTA transit cards) to local women facing abuse and destitution. There are also pre-addressed postcards to Illinois’s two senators, Mark Kirk and Richard Durbin, urging them to support the Security and Financial Empowerment (SAFE) Act, which, if passed, will allow abused women time off from their jobs for medical and legal assistance.

To Buchholz-Miller, the connection is clear: “If we increase education and economic opportunities for women,” she said, “the whole community will improve.”

Michael Berenbaum, a Holocaust scholar who was involved with the creation of both the United States Holocaust Memorial Museum and ILHMEC, said he hadn’t seen the new exhibit and didn’t feel he could comment on whether it contributed to the larger mission of a Holocaust museum without distorting the Holocaust’s own uniqueness. But he said, “The Holocaust is only understandable if you understand what’s different and unique about it, the way in which it differs from other genocides. The Illinois museum is doing it in a way that walks a fine line. The conflict, or tension, shouldn’t be resolved. You need to live with the tension. You may not resolve it abstractly, but live creatively. A comparison shouldn’t be facile, or shallow, or easy.”

There is no doubt that ILHMEC’s new exhibition is popular. The show, which opened on September 25, drew a capacity crowd of 400 people on its first day. Illinois attorney general Lisa Madigan spoke about the challenges women face throughout the state. And Fritzie Fritzshaller, the museum’s president, spoke about her own experiences as a Holocaust survivor, helping other women and being helped in return.

“She talked about the women she knew in the camps, her aunt and the women she worked with in the factory, who supported her and helped her,” said Buchholz-Miller. “She attributes her survival to them.”

In its presentation of female trafficking around the world today, the museum exhibit implicitly links the Nazis’ use of slave laborers like Fritzshaller to this contemporary issue. No one is sure exactly how many women are trafficked annually, but the International Labor Organization of the United Nations estimates that, at any given time, there are 12.3 million people trapped in forced labor or sexual servitude worldwide.

“When people say ‘slavery,’ you think about the past,” said Buchholz-Miller. “But it happens today, both abroad and here.”

The exhibit tells the story of Meena Hasim, who was trafficked from Nepal to a brothel in India. She managed to escape, but went back and, with the aid of an organization called Apne Aap, freed her two children. There is a photo of Hasim, post-escape, looking pensive, yet triumphant.

On the opposite wall in pictures and explanatory text, ILHMEC offers the story of Hasim’s Chicago counterpart, Brenda Myers-Powell, who grew up in a rough neighborhood on the city’s West Side and was first kidnapped by pimps when she was 14 years old. Myers-Powell worked as a prostitute for 25 years before she managed to escape the life. In 2008, she formed the Dreamcatcher Foundation, a nonprofit that supports girls and women who have been trafficked.

The museum’s interest in getting visitors to consider the exhibition in terms close to home moved it to partner with the YWCA in nearby Evanston to present stories and statistics from the Chicago area. It’s true a woman in Chicago is far less likely to die in childbirth than a woman in Somalia (or Auschwitz), and that there’s sufficient medical care here to prevent fistulas. But Chicago is a major hub for human trafficking in the United States; an estimated 16,000 girls are trafficked through the city every year. The Evanston YWCA is also active in providing care for women who have experienced domestic violence.

“This exhibit is not a complete global representation,” said Buchholz-Miller. “We’d need many galleries for that.” Kristof and WuDunn only wrote about places they’d actually visited and people they’d actually met, mostly in Africa and East and South Asia.

In line with its emphasis on spurring viewers to action, the exhibit accompanies the stories of several such women with information on solutions. From the perspective of an average American, it seems almost fanciful that a $2 microloan could make any difference in a person’s life. But Goretti Nyabenda, a woman in Burundi whose photo and story are featured in the exhibition, leveraged hers into a successful banana beer business.

Another of the women featured in the exhibition, Mamitu Gashe, first came to the Addis Ababa Fistula Hospital in Ethiopia as a 15-year-old patient. After she healed, she stayed on. At first she worked making beds, but soon she began assisting Reginald Hamlin, the Australian doctor who cofounded the hospital with his wife, Catherine, during surgeries. Eventually she began performing operations herself and is now, 42 years later, one of the world’s most experienced fistula surgeons.

Visitor response to the exhibition has been overwhelmingly positive. After touring the show, Linda Rhodes wrote in an email that some of the stories brought her to tears. For better or worse, she reflected a widespread hunger to find a source of inspiration in the dark events that writer Eli Wiesel portrayed as an abyss of hopelessness from which, in the end, few Jews were saved.

“I was very impressed with the museum’s inclusion of this exhibit,” she wrote. “The exhibit’s message about love, passion and commitment having the ability to eventually overcome hate, oppression, and inequality were consistent with messages from the Holocaust in my view.”