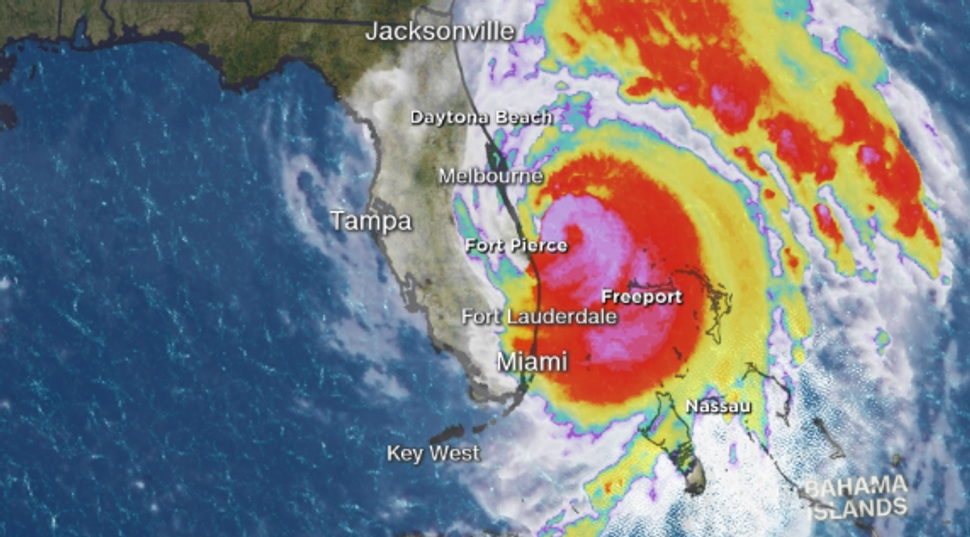 Jewish institutions in Florida were bracing for the worst as officials issued dire warnings about Hurricane Matthew, a major storm that was poised off the state’s Atlantic coast Friday morning and was expected to ravage to the central and northern Florida coast over the next day.

The National Hurricane Center called Matthew, which wreaked havoc through Cuba and Haiti, extremely dangerous — and warned it could still move inland and do even more damage to Florida.

The storm was packing gusts of 70 miles per hour and heavy downpours across coastal communities in Florida as it moved parallel to and just offshore of the east coast of Florida near Cape Canaveral, the National Hurricane Center said in an predawn advisory.

“We are just bracing and the winds are picking up,” Daytona Beach Mayor Derrick Henry told CNN early on Friday. “A great number of our residents have taken heed to our warnings and we are certainly concerned about those that have not.”

The 550,000 Jews of south Florida joined their neighbors in hanging hurricane shutters to shield windows from flying objects as well staying home from work and school. In many cases the weather is preventing communal religious gatherings because of the dangers of braving 100-mile-per-hour winds predicted during landfall.

Many synagogues are shuttering for Shabbat as the storm is predicted to rage during that time and could potentially leave a dangerous mess in its aftermath. The entire state is practically in lockdown and many are being told to evacuate coastal areas.

The proprietor of Zak the Baker kosher restaurant in the hip Wynnwood section of Miami posted a Facebook photo of staff boarding up the storefront on Thursday morning. The Miami Jewish Federation rescheduled a Thursday night Community Memorial Service honoring Israeli President Shimon Peres organized together with the Consulate General of Israel in Miami and other groups.

In Miami the Aventura Turnberry Jewish Center and Tauber Academy announced closures Thursday, October 6 and Friday, October 7. It affected their daily minyan in the morning and afternoon. An announcement on their web page said the leadership would continue to monitor the storm and its aftermath and promised to advise the congregation via text message about holding Friday night and Saturday morning services this coming Shabbat if weather, road and building conditions permit.

Temple Israel of Greater Miami on the mainland and Temple Beth Sholom on Miami Beach closed during the week, also telling their congregants they would open for services Friday and Saturday weather permitting.

Farther south, Congregation Bet Shira in Pinecrest erred on the side of caution telling congregants through social media there would be no Friday evening Shabbat services but Saturday morning Shabbat services would take place as usual, providing the synagogue has electrical power. Central and northern coastal areas were expected to bear the brunt of the storm.

Evacuation orders were given for those residing in coastal areas starting around the Palm Beach area as well as counties to the north.

About 300,000 Florida households were without power, local media reported. In West Palm Beach, once lit street lights and houses went dark and Interstate 95 was empty as the storm rolled through the community of 100,000 people.

Matthew’s winds had dropped on Thursday night and into Friday morning, downgrading it to a Category 3 on the five-step Saffir-Simpson scale of hurricane intensity, where it could either plow inland or tear along the Atlantic coast through Friday night, the Miami-based center said.

Few storms with winds as powerful as Matthew’s have struck Florida, and the NHC warned of “potentially disastrous impacts.”

The U.S. National Weather Service said the storm could be the most powerful to strike northeast Florida in 118 years.

“This storm will kill you,” Governor Rick Scott said in a Thursday press conference, urging Floridians to take the storm seriously.

With the danger of a storm surge, the egalitarian Temple Emanuel, located on the barrier islands of Palm Beach, cancelled Friday night and Shabbat morning services. The Conservative Temple B’nai Jacob of Wellington in the western suburbs of Palm Beach County urged congregants through their Facebook page to make sure their preparations for the hurricane were thorough and complete.

“Evacuate if necessary,” they urged. “Call another member of our community if you need assistance. Contact the appropriate authorites or the shul if you need help for a specific emergency. Be safe, and be strong. Chazak v’nitchazek! Be strong and we will strengthen each other! See you on Yom Kippur, when we will bentch gomel together as a congregation for delivering us from danger.”

Farther north the Jewish Federation of Greater Orlando closed their operations as did the Maitland Jewish Community Campus through Monday. The Conservative Jacksonville, Florida Jewish Center synagogue also announced their closing this week, moving their annual cemetery memorial with another synagogue indoors on Sunday to the Jacksonville Jewish Center.

By far, the most creative message explaining the series of cancellations through Monday caused by weather was a YouTube video posted by the clergy at Temple Judea of Palm Beach Gardens. Rabbi Yaron Kapitulnik and Cantor Alicia Stillman sang the traditional Shalom Aleichem Shabbat song in front of the temple’s ark.

“Yehi ratzon lefanecha Adonai elohenu velohei avotenu, may it be your will Adonai, God of our ancestors, that we all remain safe and dry, Amen,” Kapitulnik ended the video.—With JTA and Reuters