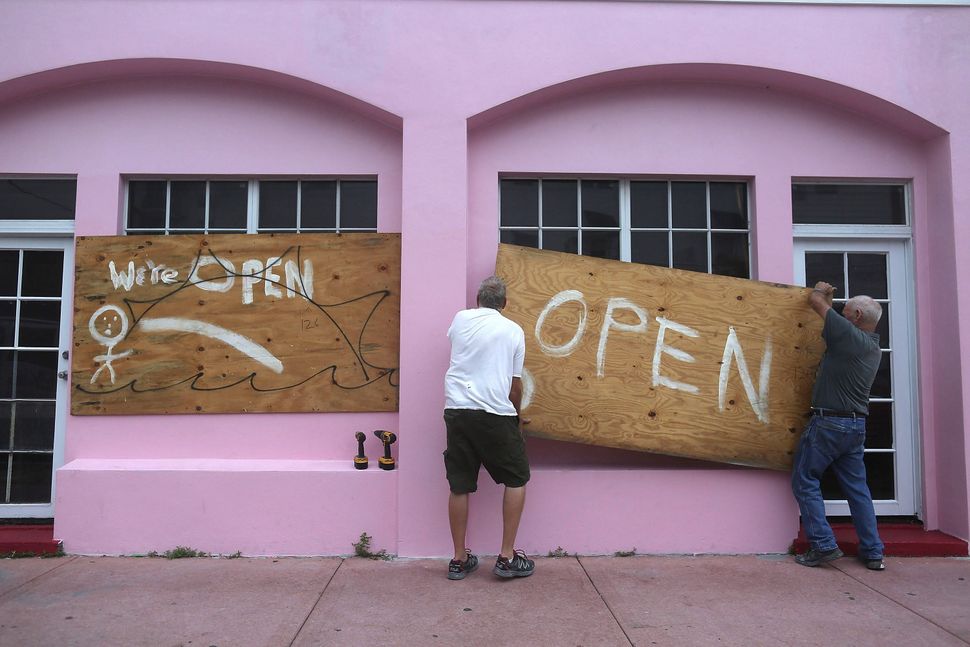 On Friday, October 7, Shabbat was approaching — and off the coast of Florida and Georgia, so was Hurricane Matthew, the category 3 storm called a “monster” by Florida’s governor, Rick Scott.

Which is why instead of putting out the prayer books and ironing their best clothes in preparation for Jewish day of rest, congregations and congregants were locking doors, tucking away precious ritual objects and seeking refuge in other cities.

In Florida, the state expected to bear the worst of the storm, a father and son, both Reform rabbis, created their own method for dealing with it.

Rabbi Michael Birnholz, the spiritual leader of a Reform congregation 140 miles away in Verso Beach, on the east coast, feared that his temple could get clobbered by the storm. As a precaution, the younger Birnholz cancelled Shabbat services, stored the synagogue’s Torahs in a protected bank vault, and invited congregants to travel to his father’s temple, far outside of the danger zone.

“We just have a little breeze here,” said his dad, Rabbi Richard Birnholz, who helms Congregation Schaarai Zedek, a Reform temple in Tampa where Shabbat and Yom Kippur services are going ahead as planned.

The Aventura Turnberry Jewish Center, north of Miami Beach, hopes to reopen for Shabbat services, but as of now, their offices are closed, and an automated message greets callers telling them about the cancellation. The congregation has also postponed its Community Memorial service for Shimon Peres until after Yom Kippur.

Following recommendations by the state, the JCCs in Miami Beach are staying closed until at least Saturday afternoon. On their Facebook-page, the JCC North Miami Beach informers their members that “our main priority is the safety of our members and staff. As such, we hope that you and your families remain safe and dry.”

And further north, synagogues and other Jewish institutions are following Florida’s lead.

“We are under mandatory evacuation. It’s calm and nice now, but it’s not going to stay like this,” said Motti Locker, temple director of Congregation Agudath Achim, a Conservative congregation in Savannah which is shuttering for the weekend.

The Savannah Education Alliance, run in the same facility as the city’s Jewish Federation and Jewish Community Center, used Twitter to notify the community that it would be closed on Friday due to Hurricane Matthew.

Many among Locker’s congregation had gone to Atlanta — the “main sanctuary area” — to seek refuge with family and friends.

Indeed, a receptionist at Atlanta’s Congregation Shearith Israel said that an e-mail had been sent to congregants asking if they’d open their homes to those fleeing the storm.

Even further inland, Jewish institutions were playing it safe.

Melanie Weiser, an education student in Augusta, Georgia, said that she did not anticipate the storm would hit the city, located about 130 miles northwest of Savannah, though she noted the local synagogue, Adas Jeshurun, had canceled Shabbat services just in case. “If it veers off course, we could be affected. But I think we’re just going to get rain.”

For Orthodox Jews, who observe a strict set of religious rules related to the Sabbath, the storm is a unique challenge, because synagogue attendance is expected — but religious law also says that nobody should jeopardize their life to fulfill a religious obligation.

To keep the over-zealous safe, the Union of Orthodox Jewish Congregations of America has developed a set of emergency protocols: “If a hurricane occurs on Shabbat or Yom Tov, stay home,” the union advises.

The union has also compiled detailed rules about following rabbinic laws when your life is in danger. For example, it is forbidden to turn on and off lights during the Sabbath. But what if electricity fails? In that case, they urge Sabbath observers to “Hang/place lit flashlights with fresh batteries in key locations before Shabbat and Yom Tov.” LED-falshlights that can last up to 48 hours are best.

But if everything else fails, a Jew would be permitted to move a flashlight or crack a lightning stick “to insure that no trauma nor any other physical danger adversely affect any individual,” the UOJCA advises.

And then there are some who place their faith in a higher power.

Rabbi Chay Amar from the Chabad of Golden Beach-congregation in Miami said that the worst had passed. He attributed the relative calm to a blessing, given years ago, from the late leader of the Chabad movement, Rabbi Menachem Mendel Schneerson.

“In 1992, as hurricane Andrew came, the people asked the Rabbi Schneerson if they should worry, and the rabbi motioned with his hand and showed that there was no reason to worry,” Rabbi Chay Amar told the Forward.

Ever since then, in Amar’s eyes, Florida has been spared from severe hurricanes.

“Rabbi Schneerson gave a blessing to protect Florida. And thank God, the hurricane completely went away, even though everybody was panicking. We are not worried at all.”