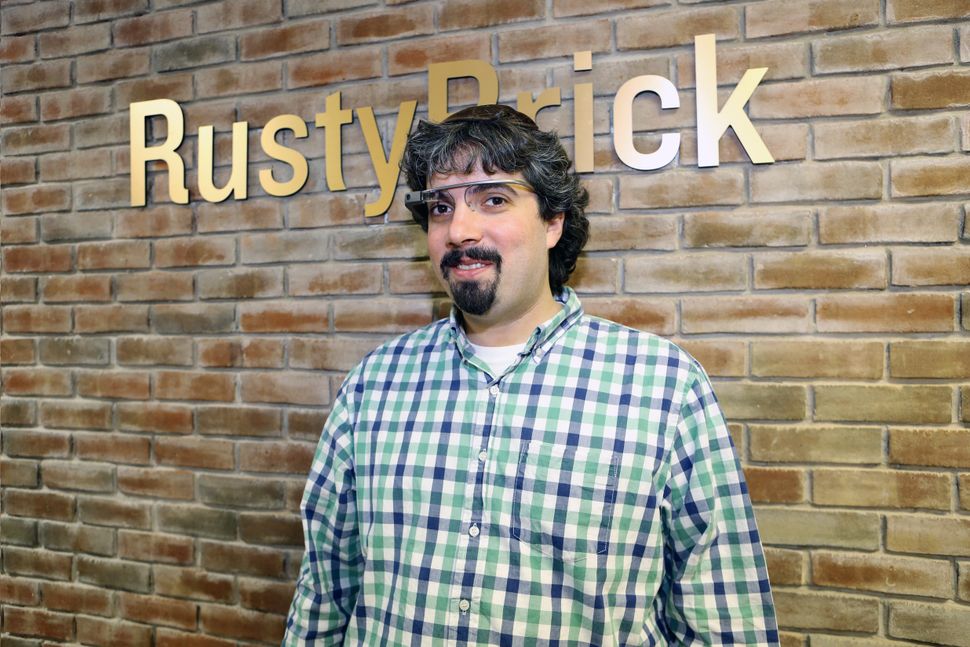 Want to sell suits to the parents of bar mitzvah boys in Cleveland? Life insurance to Jewish newlyweds in Boynton Beach? Orthopedic shoes to seniors in Brooklyn?

A New York technology company has a new service that’s sending targeted ads to Jewish consumers — and it’s doing it through synagogue newsletters.

RustyBrick, which sells a popular web-based software package used by synagogues use to manage their billing and web presences, is now using that package to serve highly individualized ads through synagogue websites and e-mails.

Some synagogue members have bristled at the high-watt commercialization.

“Everyone gets inundated with ads as is,” said Yehuda Derdik, a volunteer at Agudas Yisroel Bais Binyomin, a synagogue in the Flatbush section of Brooklyn which uses the new ad service.

Yet Derdik, who works on technology for the synagogue, said that the ads are earning good money for the synagogue. He invited one upset member to pay the equivalent of the ad revenue himself. The member declined.

Advertising to Jews through their synagogues is nothing new, and synagogue bulletins have carried ads almost since the first synagogues began printing bulletins. But the new digital advertising service is taking the concept a big step further, using big data techniques to use a network of 460 synagogues to sell highly-targeted ads to their million-plus members.

“Nobody was really doing it,” said Barry Schwartz, CEO of RustyBrick, the small tech firm behind the fledgling service.

The project, called the Jewish Ad Network, is built on top of RustyBrick’s synagogue software, called ShulCloud. Since ShulCloud stores member data on remote servers controlled by RustyBrick, the company has accumulated a massive collection of information on more than 1 million synagogue members. The Jewish Ad Network allows advertisers to narrowly target ads based on information gleaned through synagogues that use ShulCloud, such as members’ age, gender, or upcoming lifecycle events. The ads are inserted into email newsletters and placed on synagogue websites. Half of the ad revenues go to the synagogue; half to RustyBrick.

Schwartz’s effort, which launched several months ago, has yet to catch on with advertisers. An ad running on synagogue websites through the network in early October promoted an Israeli company that offers legal representation to Holocaust survivors. Schwartz said that his company had sold ads to a custom Judaica company, among others.

Synagogues can choose whether or not to participate, and can block certain advertisers.

“The open rates on the emails are close to 50% on average, because most of the members are obviously very engaged with their synagogues,” Schwartz said.

Schwartz said that some synagogues that use ShulCloud have already opted out of serving ads to their members. One ShulCloud fan, Hebrew Institute of Riverdale executive director Richard Langer, told the Forward that his congregation would not use the ad service.

“The board did not want to commercialize its communications with members,” Langer said. Langer also said that there were concerns about tax complications.

Derdik said that his synagogue, Agudas Yisroel Bais Binyomin, got over its own concerns quickly. “The beautiful thing is that I can decide up front what kind of ads we run or don’t run,” Derdik said, saying that he had blocked ads that violate his community’s modesty standards.

In fact, print synagogue bulletins have carried advertisements almost since their inception. One of the earliest synagogue bulletins available in Yeshiva University’s digital collection of New York-area synagogue newsletters, a bulletin from Kehilath Jeshurun from 1931, carries what appears to be an advertisement for Riverside Memorial Chapel, a Jewish funeral home that continues to operate on Manhattan’s West 76th Street.

“We’ve already gone fairly far down that road,” said Rabbi David Teutsch, who heads the Center for Jewish Ethics at the Reconstructionist Rabbinical College, of synagogue newsletter commercialization. “You have to weigh it not as a means in itself, but against the competing means of fundraising that are available. People may find this less onerous than a dues increase, for example.”

Jonathan Sarna, the eminent professor of American Jewish history at Brandeis University, said that in the early days of synagogue email newsletters, many Jewish congregations used a mass email service provided by Yahoo. An evangelical Christian missionary organization bought up ads on the service, so that synagogue newsletters arrived bearing missionary advertisements.

“I suspect that that accelerated the effort to find a different technology,” Sarna said.

ShulCloud’s biggest competitor, a synagogue management software package called Chaverware, which is used by more than 700 congregations, doesn’t currently offer the ability to place ads. A spokesman for Chaverware said that the company was planning a new functionality that would allow synagogues to sell their own ads and place them in their email newsletters, but wouldn’t be creating its own ad network.

RustyBrick, for its its part, has high hopes for its service. “I just got to get the word out more,” Schwartz said.