Yom Kippur Online: Pray in Your Pajamas, and Protest the Occupation at the Same Time

If you disagree with your rabbi’s politics — on Israel, refugees and immigration, for example — you don’t have to suffer through an uncomfortable Yom Kippur sermon.

You can live-stream it instead, and pray in the comfort of your own ideological and actual home.

This year, the far left-wing group Jewish Voice for Peace is hosting live digital services on its website. The group’s Rosh Hashanah services drew around 300 viewers, who watched JVP-affiliated rabbis across the country lead services in their home congregations — deliver sermons on a range of hot button political issues like Black Lives Matter, immigration and Israel’s occupation of the West Bank.

Participating JVP-affiliated rabbis will stream normal High Holiday services — following the liturgy and prayer structure familiar to most — from their congregations. The rabbis are Dev Noily in Oakland, Rabbi Brant Rosen in Chicago and Rabbi Linda Holzman in Philadelphia.

The effort is a first for JVP, which supports the boycott movement against Israel and often finds itself at odds with the Jewish communal establishment. The online venture also signals the group’s hopes to provide spiritual, as well as political, messaging to its members. 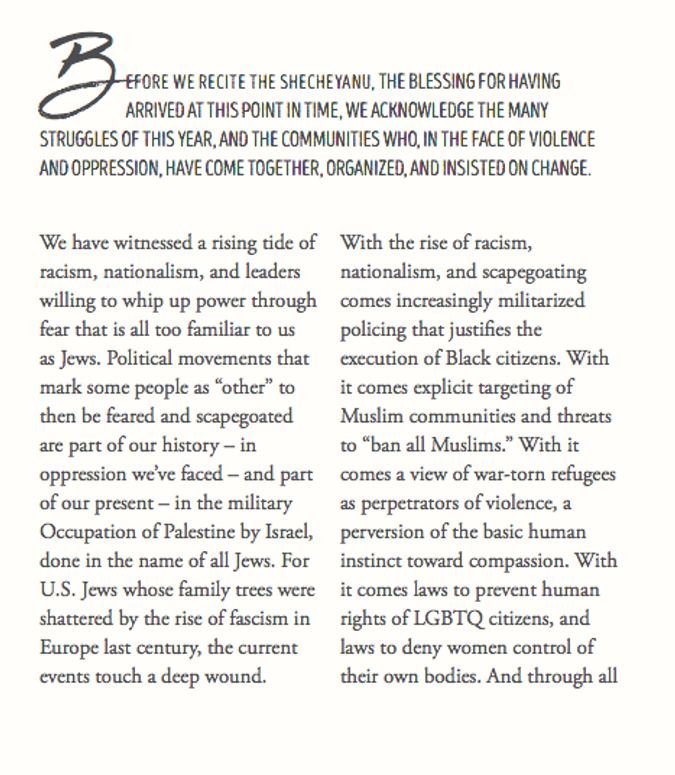 A page from a JVP Rosh Hashanna booklet offers text to read alongside blessings, and mentions the “Occupation of Palestine by Israel,” which is “done in the name of all Jews.”

This comes as a younger generation of activists seeks to voice their criticism of Israeli policy in the language of Jewish liturgy. On Monday, If Not Now, a newly-formed activist group that also campaigns against Israeli policy, staged a High Holiday protest in New York City. If Not Now’s inaugural campaign earlier this year was Passover-themed; members staged mock Seders to protest the Israeli occupation of the West Bank.

“Join us in prayer, song, and inspiring text that interweaves Immigrant Justice, the Movement for Black Lives, and Palestine throughout the new year’s themes of reflection, return, and renewal,” JVP’s website reads, announcing this High Holiday venture.

Critics of JVP’s politics — Israel-related or otherwise — are also critical of the group’s forays into Jewish liturgy.

Speaking in the Algemeiner, Rabbi Joseph Potasnik, executive vice president of New York’s Board of Rabbis criticized JVP’s High Holiday efforts. “We use this time to strengthen relationships with one another,” Potasnik said, “not denigrate and sully the name of Jews.”

JVP’s “rabbinical council,” which oversees efforts like the live-streamed services, was founded by Rabbi Brant Rosen, a high-profile Chicago rabbi and vocal critic of Israel. All of the spiritual leaders participating also belong to the council.

Yom Kippur Online: Pray in Your Pajamas, and Protest the Occupation at the Same Time