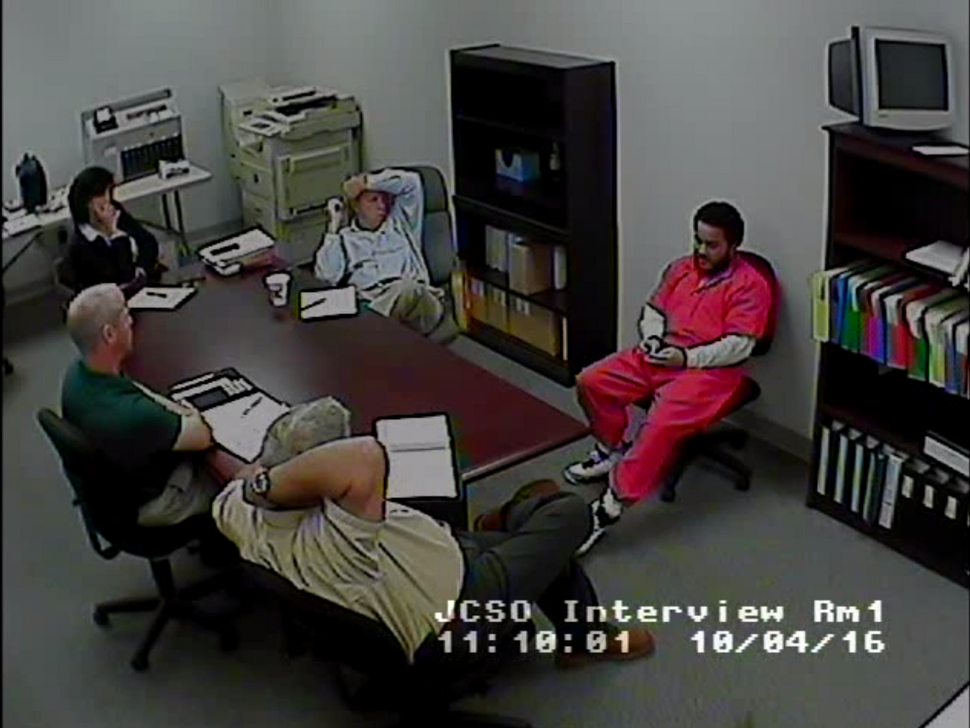 One of the hit men who killed Jewish law professor Dan Markel says that Markel’s ex-wife, Wendi Adelson, scoped him and his partner out the day before the murder.

The allegation came in an October 4 police interview, released this week by the Tallahassee Democrat. The hit man, Luis Rivera, says that Sigfredo Garcia, his longtime friend, shot Markel. Rivera, who says he drove the getaway car, has pled guilty to second-degree murder.

In the course of the two-hour interview, Rivera told police that Garcia said he had been hired to kill Markel because “the lady wants her two kids back.”

Markel and Adelson, who divorced in 2013, were locked in a bitter custody dispute at the time of the murder.

Under oath, Rivera said that he and Garcia saw Wendi Adelson walking near Markel’s house the day before the murder.

“What’s up with this lady?” Rivera said he asked Garcia. “Why is she looking so much?”

Rivera said that Garcia recognized Adelson, and called Katherine Magbanua, who was in romantic relationships with both Garcia and Adelson’s brother, Charles Adelson, to ask about the encounter.

Magbuana has been charged with first-degree murder in connection with Markel’s death. Police say she is the only link between Markel and his killers.

Over the phone, Garcia asked Magbuana why Adelson was near Markel’s house. Rivera says that Magbuana told Garcia that Adelson wanted to “make sure he wasn’t lying, that she wasn’t just paying him for nothing.”

Prosecutors told the Tallahassee Democrat on October 11 that the alleged encounter between the hit men and Adelson could, if proven, connect Adelson with Markel’s murder.

“I think if it’s true, it implicates her, but I haven’t been able to confirm or deny that,” Chief Assistant State Attorney Georgia Cappelman told the paper.

Adelson’s attorney, John Lauro, told the Tallahassee Democrat on October 12 that Rivera’s testimony is unreliable. “All of his alleged information is second or third hand and none of it has been corroborated during the investigation,” Lauro said.

Laruo has denied that Adelson played any role in the murder. Attorneys for Adelson’s brother Charles and for their parents have also denied that their clients played a part in the killing.

Under the terms of his plea deal, Rivera will serve an additional 7 years on top of the 12 years he is currently serving on unrelated federal charges.

Garcia, charged with first-degree murder in connection with the killing, has pled not guilty.

Speaking with his hands shackled throughout his lengthy interview with police, Rivera wove a detailed account of two separate trips to Tallahassee with Garcia, the second of which ended in Markel’s brutal killing.

In Rivera’s telling, the trips were drug-addled and booze-soaked. Garcia, in particular, imbibed heavily, snorting cocaine and drinking. At one point Garcia, who Rivera calls “Tuto,” shot a hole in the floor of their rented Prius, according to the Tallahassee Democrat’s account of the taped interview.

Rivera says that Garcia, his lifelong friend, recruited him for help killing Markel because he was “the only one” Garcia trusted. The trust, apparently, only ran one way: Rivera made sure to bring his own weapon to defend himself in case Garcia decided to kill him, too.

When Garcia first approached him about traveling together to Tallahasee, Rivera thought he was being asked for help committing a robbery, something he’d done before. “I’m a jackboy. I rob drug dealers,” Rivera said during the interview.

They drove through the night to Tallahassee, stopping just once at a rest stop. “I was rolling a blunt, I was drinking, the whole night going that way,” Garcia said.

At one point, Garcia asked Rivera if he would pull the trigger when it came time to kill Markel. Rivera declined. He told police that Garcia thought that he had murdered before, though he said he hadn’t. “Never in my life killed nobody,” he said. “I done beat people with bats, hit them with sticks.”

The men carried a .38 Smith & Wesson revolver and a .38 Taurus revolver. They followed Markel for days, picking up his trail at home in the morning, and tracking him to the day care, where he left his children. At night, the men drank and did drugs.

Eventually, they gave up, and Rivera headed back to Miami. Their second attempt, a month later in July of 2014, was more deadly.

“When he came out of the gym, I followed him home,” he told police on tape. “As I’m following him home, he goes around the back. I go around the front. We met him right in at the garage. I was maybe like three, four feet away from his car. Garcia jumps out, goes around the car… I think Markel was on the phone that day. Shot him twice. Got in the car. We left. Kept driving. We dumped the gun towards the bridge. Can’t remember that bridge. I wish I could remember so I could show you.”

Only Garcia, Rivera and Magbanua have been charged in the case. Court records published by the Tallahassee Democrat show that police believe Magbanua is the only tie between Markel and his killers. She was denied bond in a hearing on October 11.

In August, police released a heart wrenching video of Adelson learning about Markel’s death. In the video, a sobbing Adelson tells police that she worries that someone may have killed Markel on her behalf.

“Danny didn’t treat me very well, and I’m so scared that maybe someone did this, not because they hate Danny, but because they thought this was good somehow,” Adelson said.