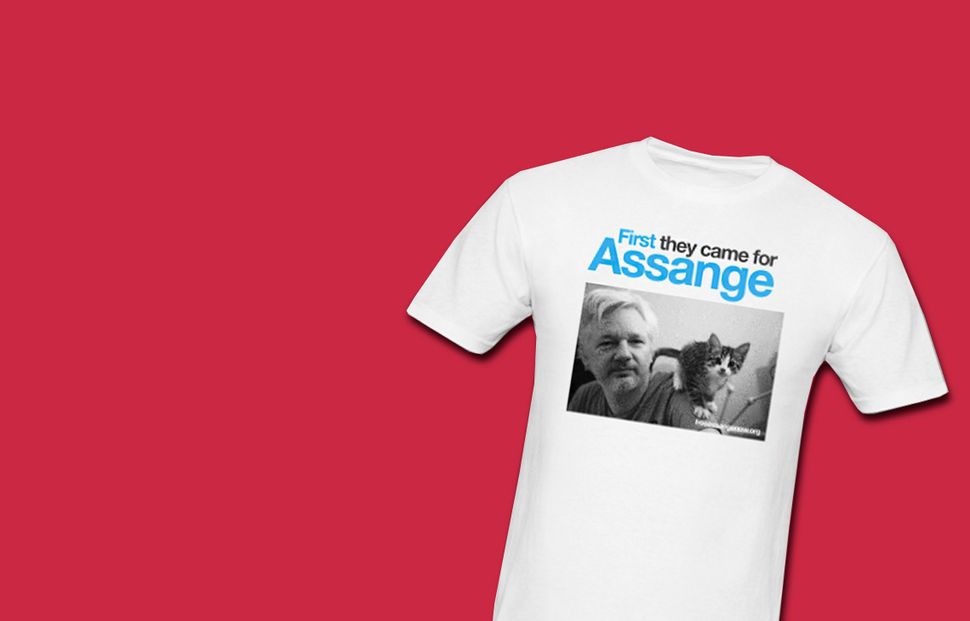 “First they came for the Socialists, and I did not speak out — Because I was not a Socialist,” opens the famous poem by Pastor Martin Niemöller, describing the the Nazis’ rise to power and the targeting of minority groups, one after the other.

“Then they came for me — and there was no one left to speak for me,” continues the poem, which has come to symbolize the price of indifference in the face of fascism.

Now Julian Assange, founder of the whistleblower website Wikileaks, thinks he is also being persecuted and that no one is speaking up for him.

On the Wikileaks online shop you can even buy T-Shirts emblazoned with an augmented reference to the famous Neimoller poem — “First they came for Assange” — and a picture of Assange. A kitten sits on his shoulder.

“This is our best seller for a reason,” the product description reads. “Relaxed, tailored and ultra-comfortable, you’ll love the way you look in this durable, reliable classic.”

“Four years after Julian Assange passed through the gates of the Ecuador Embassy in London, asking for asylum, people from all over the world join their voices in order to ask that this unbelievable persecution is brought to an end,” the site reads.

What may strike some as ironic about the Holocaust reference is that since gaining international attention in 2010 with the release of nearly 100,000 classified logs of the war in Iraq, Wikileaks — and particularly Assange — has repeatedly come under fire for anti-Semitism.

The organization has employed a Holocaust denier and tweeted anti-Semitic jibes. Assange has also suggested that Jewish journalists target him specifically for critical coverage.