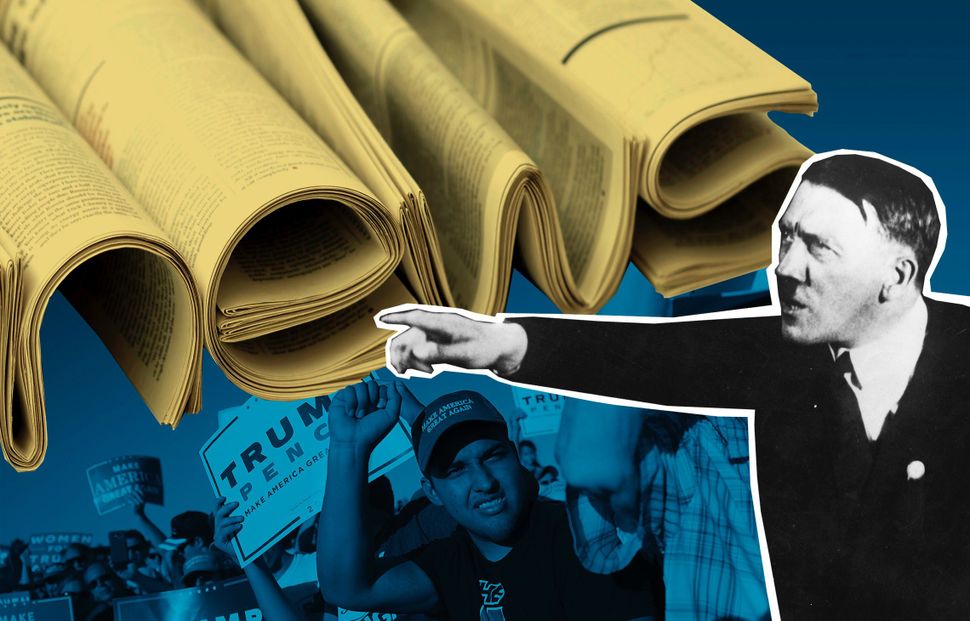 In this strange election season, her quip has traveled the distance from ribbing to reality.

For months, Donald Trump and crew have been making neo-Nazi dog whistles, from the six-pointed star incident, to prattling about international banker conspiracies, to pledging allegiance to the Republican nominee at his rallies. But the candidate’s fans seem to have gone one step further in their war on the so-called “rigged media,” branding the country’s reporters with a term the Third Reich once used against dissident writers — lügenpresse, or “lying press.”

Rosie Gray, a campaign reporter with BuzzFeed News, captured the presidential hopeful’s supporters hurling the insult at journalists in the media section at a Saturday rally in Cleveland, Ohio. On the video taken by Gray, two men spewed the term of abuse on camera. “That’s what you are, lügenpresse,” said one man, as the Backstreet Boys’ song “I Want It That Way” played in the background.

“You’re all in the bed with the Clintons. You’re all bought and paid for,” continued the other, echoing Trump’s charges that the media has fabricated allegations of sexual assault against him in order to help rival Hillary Clinton win the presidential election.

According to The Intercept, the Nazi term wormed its way into the modern, ‘alt-right’ lexicon thanks to the rise of the far-right Pegida movement in Germany, which has used the epithet in protests where it denounces Muslim immigration and multiculturalism.

Breitbart News, the ‘alt-right’ nerve center from which Trump drew campaign head Stephen Bannon, has imported the term, often using it as a synonym for “mainstream media,” the usual pejorative given to traditional print, television and radio outlets.