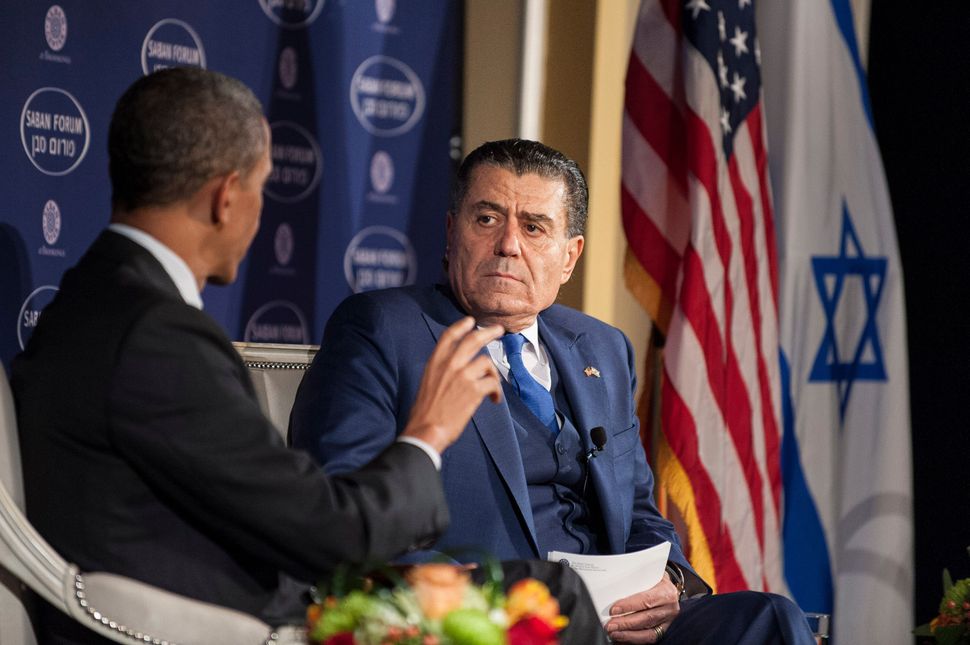 Hollywood billionaire and major Hillary Clinton donor Haim Saban was told that his views on screening Muslim refugees were “not consistent” with the Democratic presidential candidate’s position following an interview in which he advocated “more scrutiny” of Muslims after the 2015 Paris terror attacks.

The email exchanges between Saban and vice chairwoman of the Clinton campaign Huma Abedin were among the correspondence hacked from the account of Clinton campaign chairman John Podesta made public on Monday by WikiLeaks.

Saban, who, in addition to millions of dollars in support, has frequently contributed opinions and ideas to the Clinton campaign, previous Podesta email dumps have revealed.

On November 19, he shared with campaign officials an interview with him published by show business website The Wrap, titled “Hollywood Mogul Haim Saban Calls for ‘More Scrutiny’ of Muslims.”

In the wide-ranging interview focusing on his support for Clinton and how the November 13 Paris terror attacks could alter the 2016 presidential election, Saban was asked about Hollywood reaction to the terror attacks.

He replied that “Many members of the Hollywood community are very liberal and they value their civil liberties more than they value life. I disagree with that. You want to be free and dead? I’d rather be not free and alive. The reality is that certain things that are unacceptable in times of peace – such as profiling, listening in on anyone and everybody who looks suspicious, or interviewing Muslims in a more intense way than interviewing Christian refugees –  is all acceptable [during war].Why? Because we value life more than our civil liberties and it’s temporary until the problem goes away.

“But to say this is shameful – I disagree. [ISIS] said, ‘We’re going to Paris,’ and they went to Paris. They’re saying they’re now going to Washington. Watch out, they might. I’m not suggesting we put Muslims through some kind of a torture room to get them to admit that they are or they’re not terrorists. But I am saying we should have more scrutiny.”

Saban, clearly proud of the interview in which he also said that Clinton was “absolutely made of steel and she will take no baloney from no ISIS,” sent a link to the article to campaign officials. He told them to: “Read, and get a kick from my statements about Bernie (S)anders, Rubio and Trum(p) w/o even mentioning their name.”

Abedin was not as thoroughly pleased by the article as Saban hoped, responding with praise coupled with a gentle admonishment: “Good interview. Thanks for sharing. But what you are saying about Muslims not consistent with HRC. Are you aware of that?”

Saban answered: “What I said was that we should scrutinize the Muslim immigrants … if we take France as an example of what happens when millions of people enter a country w/no scrutiny, our lives are put in jeopardy … Life before liberty … I am not aware of what her position is on this.”

Saban, a billionaire with business interests in both America and Israel, has been known for his close ties with the Clintons for more than 20 years. He is one of the most generous and reliable donors to Clinton’s political campaigns, to PACs supporting her efforts, and the Clintons’ philanthropic organization.

Earlier in 2015, the Podesta emails revealed, Saban advised the Democratic nominee for U.S. president to distance herself from President Barack Obama’s policies on Israel.

“She needs to differentiate herself from Obama on Israel,” Saban wrote to Clinton’s inner circle of advisers in a June email, saying that she needed to do so in order to “recapture” Jewish voters who had supported President Bill Clinton in 1992, but voted for Obama’s Republican opponents in 2008 and 2012.