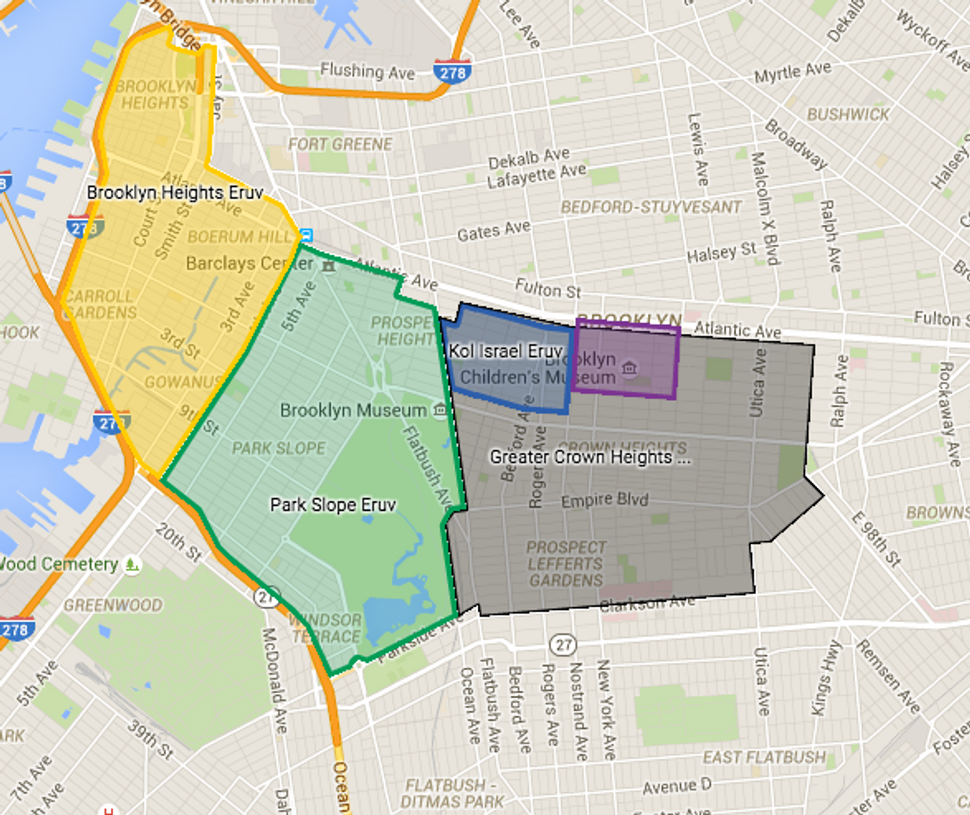 Police arrested two men in connection with the vandalism of an eruv built in the Crown Heights neighborhood of Brooklyn, the NYPD said.

Yosef Kratz, 36, and Yosef Doran, 21, were both arrested on charges that they attempted to vandalize the eruv, a ritual boundary that marks off areas where Orthodox Jews may move more freely on the Sabbath. The eruv was inaugurated this summer to serve members of a Modern Orthodox synagouge.

Kratz and Doran, who are both Hasidic Lubavitchers, were initially to be charged with criminal mischief as a hate crime and criminal tampering, according to the NYPD. But Kratz’s attorney George Farkas told the Forward that his client was charged on Thursday with only two counts of attempted criminal mischief. Kratz has been released from custody.

The eruv is backed mostly by Modern Orthodox Jews, most of whom have moved to the area in recent years. The Lubavitcher community, which has gone for decades without an eruv, has largely opposed the new boundary.

Amidst this feud, the eruv was vandalized multiple times this summer; since July, the police have been investigating the incidents as hate crimes.

“We told the police from the beginning that we are not looking to put anyone in jail,” Naftali Hanau, who played a major role in establishing the eruv and who belongs to the Modern Orthodox synagogue, wrote in a message to the Forward. “We just want the vandalism to stop.”

Hanau said that the damages to the eruv have cost around $11,000 to repair. “We’d be perfectly happy to have an apology and restitution for the damage,” Hanau wrote.

Rabbi Menachem Mendel Schneerson, the late leader of the Lubavitcher community, is said to have forbade the construction of an eruv in the neighborhood and since his death in 1994, his religious rulings and opinions are rarely, if ever, questioned by his followers.

The eruv debate pits Modern Orthodox against Lubavitcher Jews — but the Lubavitchers also face their own theological divisions which complicate the picture.

One vocal faction proclaims Schneerson as the Messiah; official leadership does not publicly hold this opinion. Messianic members dominate the main synagogue of the movement, hanging banners dedicated to their late leader and flying flags proclaiming his Messiahship.

Kratz, who is Israeli but lives in Crown Heights, is affiliated with this Messianic faction, community members said, and helps organize meals at the synagogue. Doran, the younger of the pair, works with Kratz at the synagogue.