So who was waving the bewildering “Blacks for Trump” signs at a recent Florida rally?

Meet Michael Symonette — standing behind Trump in the video above — an outspoken activist from Miami who once belonged to an extreme Hebrew Israelite group in Miami called the Nation of Yahweh.

At its height in the 1980s, the group claimed thousands of members nationwide. Their leader was Yahweh ben Yahweh, which translate as “God, son of God,” who rose to power as the city was reeling from violent crime waves and a drug epidemic.

The group did not have official ties to other Hebrew Israelite groups, according to Sydney P. Freedberg, who reported extensively on the group for the Miami Herald, but similarly identified as descendants of the ancient Israelites.

Yahweh called himself the reincarnated Messiah, championed economic independence for black Americans and amassed a large and devoted spiritual following, including Trump’s new supporter. Yahweh’s neighborhood work was even celebrated by city officials.

But there were chilling reports of violence at the center of the community. In 1991, Yahweh was charged with conspiracy in a series of brutal killings that involved a beheading. Yahweh and his followers alleged that their group was the target of a government takedown.

Trump’s supporter Symonette goes by many names, including Maurice Woodside and Michael the Black Man. His Hebrew moniker — taken during his Yahweh days — was Mikael Israel. Along with 14 other members of the group, he was charged for having a role in the murders.

Symonette was not found guilty, but Yahweh was convicted of conspiracy and sentenced to 18 years in prison. He died in 2007. Symonette appears to have remained loyal to his guru throughout — and still holds extreme and conspiratorial views, seeing a battle against Satanic forces being waged in national politics. 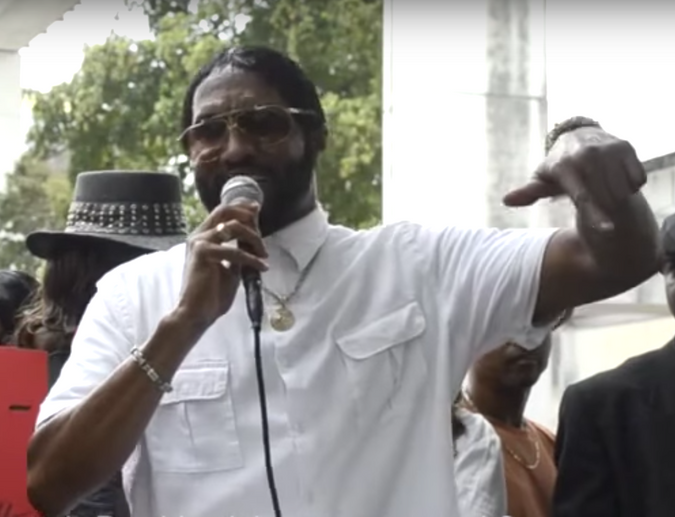 In more recent years Symonette ranted on the radio against Democrats, the Miami New Times reported, calling them, “Demon-crats” and “slave masters” who were aligned with the KKK. He also called a local mayor a “devil” and called for her to be “set on fire.”

Symonette has appeared at Glenn Beck rallies, called Oprah Winfrey “the devil” and also opposed Barack Obama’s bid for president—because he believed Obama was an apocalyptic figure, or “the beast.” Seemingly taking things into his own hands, Symonette announced he himself would run for president last year.

Symonette’s public embrace of Trump — who is championed by white nationalists — may seem unlikely.

But Trump’s anti-government message and mainstreaming of previously fringe conspiracy theories could resonate with Symonette.

“A lot of these theories that start on the right then make their way to other groups that are already suspicious of the government for their own reasons,” said Andre Key, a professor of African-American studies at Claflin University and the author of “Toward a Typology of Black Hebrew Thought and Practice.”

Key said: “That distrust of government takes root with groups that also have conspiratorial views.”

Trump has called the upcoming election rigged and accused the media of being biased. In Symonette’s eyes, too, the media is distorting Trump’s image.

“When they say that Trump is a racist, that is a lie… all of the other black leaders are against Hillary right now but the media isn’t showing it,” Symonette said, speaking in September against Trump’s rival Hillary Clinton. “That lady is a murderer, she wants everybody to enslave you. She wants to take taxes up while Trump wants to take taxes down.”

Symonnette then compared tax increases to “legal slavery, according to the bible.” Because Trump speaks against tax increases, Symonnette went on, “he is delivering us out of slavery, both black and white.”