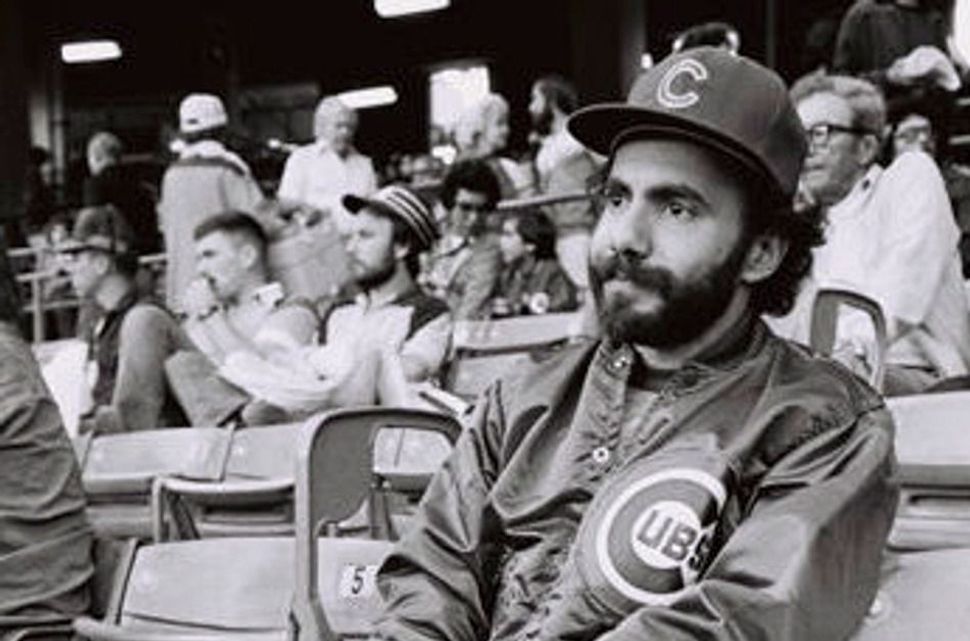 As the Cubs walked off Progressive Field Wednesday night, World Series victors for the first time since Al Capone was nine years old, the thousands of fans who had traveled to Cleveland to see them hailed their heroes with “Go, Cubs, Go” — a tune that anyone could carry and whose lyrics everyone knew by heart.

As a musical composition, the kindest thing that can be said about “Go, Cubs, Go” is that it’s simple and catchy. Even the smallest child or most inebriated fan can join in on the chorus. For the opposing team and its supporters, it’s probably annoying enough to border on psychological warfare.

The spirit of folksinger Steve Goodman, who wrote “Go, Cubs, Go,” was no doubt electrified by the spectacle of the Cubs winning the World Series—their first since since 1908. But as it happens, Goodman’s anthem is more than a song. It’s the penance Goodman, who also composed the iconic song “City of New Orleans,” paid for one of his earlier Cubs compositions.

Goodman, a prolific singer and songwriter, and one of the most devoted Cubs fans of all time. died of leukemia in 1984 at the age of 36. It was just 11 days before he was scheduled to sing the national anthem at the Cubs’ first-ever appearance in the National League play-offs. It’s also a testament to Goodman’s particular sense of humor.

But back in 1981, Goodman wrote and recorded a very different Cubs song: “A Dying Cub Fan’s Last Request.” In the tradition of Louis Armstrong’s “St. James Infirmary,” it’s about a Cubs fan who envisions his own Wrigley Field funeral. The chorus begins, “Do they still play the blues in Chicago/When baseball season rolls around/Do the Cubbies still play in their ivy-covered burial ground”

At that point, the Cubs’ last World Series championship was only 72 years earlier.

“‘Dying Cub Fan’ made [Cubs general manager] Dallas Green nuts,” recalled Dan Fabian, the program director and head of promotions at WGN-TV, the local Chicago superstation at the time, in a 2007 interview with Chicago Tribune columnist Eric Zorn. “He said we didn’t need that kind of negativity anymore. He hated the line about ‘doormat of the National League.’ He said that Steve Goodman is no fan of the Cubs.” Green forbade Goodman from singing the song inside Wrigley Field.

But early in 1984, when Fabian was looking for a song to replace Mitch Miller’s “It’s a Beautiful Day for a Ballgame” as the opening song to the Cubs’ radio broadcasts, he happened to hear Goodman on Roy Leonard’s WGN talk show and realized he’d found the perfect person to write the new song.

For one thing, Green was wrong: Goodman had been a devoted Cubs fan all his life, starting from his childhood in the then-heavily Jewish Albany Park neighborhood on the northwest side and his adolescence in Park Ridge (where he was a high school classmate of fellow Cubs fan Hillary Rodham). The stoic resignation of “A Dying Cub Fan” is common to Cubs lovers:

(Goodman’s biographer Clay Eals says that in concert, Goodman would introduce “Dying Cub Fan” by telling the audience, “If you grew up in Chicago, you knew everything there was to know about pain by the time you were 10 years old.”)

In addition to understanding the psychology of Cub-dom, Goodman happened to be a great songwriter. During his career, he wrote and recorded 13 albums. His songs ranged from goofy numbers like “You Never Even Call Me By My Name,” which attempted to cram every country music cliché into four short minutes, to anthems such as “City of New Orleans,” folk songs like “Somebody Else’s Troubles,” and such sad and sincere ballads as “My Old Man.”

Goodman developed a passionate cult following during his years playing folk clubs in Chicago and later opening for Steve Martin. “There are two kinds of people,” said Eals. “People who say, ‘Steve who?’ and people who say ‘Steve Goodman!’”

A week after Fabian invited Goodman to write an intro song for the Cubs, Goodman called him up and sang “Go, Cubs, Go.” Fabian loved it and played it before every Cubs broadcast in the 1984 season. “For all its exuberance, the song was merely the alter ego of ‘Dying Cub Fan,’” Eals wrote in “Steve Goodman: Facing the Music,” his 2007 biography. “In its fatalism it was as devoted and affectionate as ‘Go, Cubs, Go’ was in its blind faith.”

In an irony that Goodman might have appreciated, the single of “Go, Cubs, Go” has outsold everything else in his discography.

Goodman’s early death is part of Cubs lore. He always insisted that “Dying Cub Fan” wasn’t autobiographical, but when he was writing it in 1981, he’d already been living for a dozen years with the leukemia that would kill him three years later, just months after he completed “Go, Cubs, Go.”

Four years after his death, Goodman’s brother David and his friend Harry Waller snuck into Wrigley Field — Eals says they bribed a groundskeeper with a copy of Playboy into which they’d tucked a $20 bill — and scattered some of Goodman’s ashes in left field, just as he’d written in the song: “Let my ashes blow in a beautiful snow/From the prevailing 30 mile an hour southwest wind…/And I will come to my final resting place, out on Waveland Avenue.” Goodman’s wife, Nancy, and their three daughters scattered the rest of his ashes in Doubleday Field outside the Baseball Hall of Fame in Cooperstown.

Eals isn’t sure who made the decision to cremate Goodman instead of burying him according to Jewish law, but he notes that although Goodman performed at bar mitzvahs during his years as a boy soprano in Albany Park, he was more of a cultural than observant Jew. “I will defend with my life the right to be Jewish,” Goodman’s friend Paula Ballan remembers him telling her, “but I like my pork chops well-done, thank you.”

The Cubs didn’t make it to the World Series while Goodman was alive, but Eals says the musician never lost faith that something good might happen. He ended his “Dying Cub Fan” introduction by telling the audience, “The Cubs are liable to screw it up and win so I can’t sing this song anymore.”