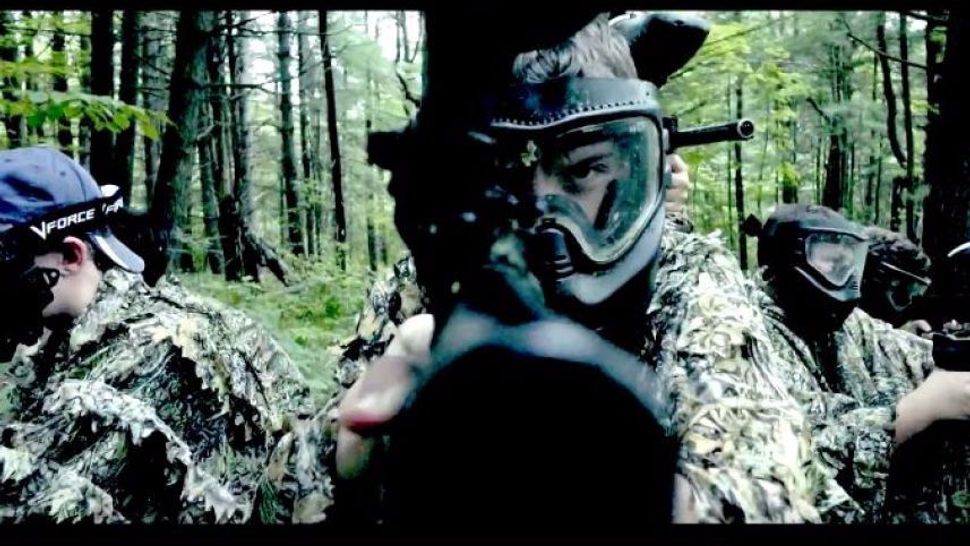 It looks like a slick military recruiting video – exciting background music pulsing in the background, soldiers in training wearing camouflage and face masks crawling through the mud as a commander urges them on, wielding rifles as they ambush an enemy in the wilderness, and, at the end, an Israeli flag waving patriotically in the background with the message to “Enlist Now” printed across the screen.

But the uniformed participants in the video aren’t soldiers – they’re children at a private New York Modern Orthodox Jewish sports camp for kids aged 8-16 called Camp Mesorah. The video promotes the camp’s “IDF Training Program,” showing “our campers training in our brand new state of the art IDF Course,” has led some American Jewish leaders to question the message it sends to prospective campers.

“In Israel the IDF is such a valuable element of Israeli society, and treated with reverence and responsibility. For American Jews to playact the IDF as part of a sports camp is to embody an irresponsible proxy form of the worst kind of nationalism, and I believe it disrespects the IDF, Zionism, and Jewish education,” said Yehuda Kurtzer, president of the Shalom Hartman Institute of North America, who posted the video on his Facebook page, calling it “nauseating.”

Many American Jewish summer camps deliver an ideological Zionist message to campers and several camps, across the religious spectrum, often design programming for campers that incorporate the concept of the IDF. In particular, the army features in tours to Israel that the camps run for older participants, through what are known as “Gadna” experiences, a kind of simulated IDF boot camp for Israeli and Diaspora teenagers.

The IDF program is one of the specialty tracks at the camp, which offers kids a long list of sports, art and cultural activities along with Torah studies in what it calls “an atmosphere of ruach (spirit) and midot tovot (positive values).

Josh Nass, a spokesperson for Camp Mesorah told Haaretz that the program, which was “designed to inspire and excite children,” had been unfairly misrepresented by critics who “deliberately chose to manufacture a controversy over something that was nothing more than a well-produced video.”

“At no point in time were campers trained to fight their enemy or teach violence in war. It’s a team-building and paintball course where campers and staff work together with obstacle and ropes courses,” Nass said. “We are religious and a Zionist camp that takes great pride in being promoters of Israel and instills a  … connection to Medinat Yisrael (the State of Israel) with no political agenda. This program gives all of our campers the chance to connect to Israel and to connect to the IDF.” But the centrality and ferocity of the military – and the close-ups of weapons – unsettled Orthodox educators and rabbis when the camp’s video was shown to them.

“In the age of gun violence and with the difficult choices that the Israeli army needs to make in the face of real danger, where ethical quandaries and moral uncertainties abound, this kind of promotional material has no place in our community. It glorifies violence and desensitizes our children,” said Orthodox educator Shira Hecht-Koller of the Drisha Institute for Jewish Education, who found that the video “with its overt emphasis on gun barrels and the brute force of weapons” is “not a balanced appreciation of the IDF” and “should have no place in Modern Orthodox education.”

What troubled Rabbi Chaim Steinmetz, senior spiritual leader of Manhattan’s Congregation Kehillath Jeshurun was not the video specifically – which “is pretty much comparable to U.S. Army and Marines commercials” – but that its existence represented a disturbing bellwether regarding the Orthodox community’s attitude toward violence. “Historically, the path Israel has followed accepts the dual responsibility of war and peace, of defending our country while always remembering that our enemies too are created in the image of God. But we now live at a time where nuance has disappeared.”

Criticism was still harsher outside the Orthodox community. Steven J. Weinberg, Founding Director of the Habonim Dror Camp Association, the umbrella group for the Labor Zionist youth movements camps, said he was “shocked” by the images, noting that when his wife saw it, she exclaimed “Oh my god! It looks like a recruitment video for ISIS.”

Camp Mesorah, located in Guilford, NY, has been operating since 1990. On its website, it states its aim is “to raise the bar in the co-ed Modern Orthodox camp community with high tech education, a nurturing Torah atmosphere, intense sports, imaginative creative arts, cutting-edge programs and workshops.” In addition to American campers, several of the camp’s participants and counselors-in-training come from Israel.

The IDF program, one of the camp’s specialty tracks, is run by Israeli couple Shlomi and Calanit Turgeman, according to an article about the camp published in a New Jersey Jewish newspaper. “Both the Turgemans served in the army – Shlomi as an officer in the artillery unit and Calanit as a guide in a combat unit. Calanit ….focuses on bringing the spirit of Israel into her Outback workshop at Camp Mesorah by playing games, singing songs in Hebrew and speaking about unity and the power of Am Yisrael. The workshop also offers a real “taste” of Israel through the delicious activity of pita baking ….” At the same time, “Shlomi provides the boys with training in various survival skills, tent building, hiding in nature, cooking in the field, navigation and basic army exercises.”

Nass, the camp spokesperson, stressed that “nothing suggesting the promotion of the killing of innocent people” took place at the camp and that, on the contrary, “campers are educated about the dangers of violence.”

Joseph Stansky, the camp’s co-owner added that the camp nurtures “devotion and love” for Israel and the IDF, and many campers had gone on to serve. “It was only a few years ago we were all walking on eggshells for the fate of three young kidnapped boys as IDF soldiers were going door to door to search for them.”

The camp reports that no negative feedback on the video was received by families when it appeared on their social media platforms. But on the camp’s official YouTube channel where the video was posted, all of the comments were negative. Commenters charged that the video “fetishizes war,” representing “a disgraceful promotion of violence and misrepresentation of Israel, IDF, Judaism and sports” and is “shameful and embarrassing.” One commentator wrote: “I’m a proud Zionist, B’nai Akiva mom, who sends my family to (Camp) Moshava and feel safe knowing they would NEVER glorify war this way. Ugh. You should feel ashamed.﻿”

Another said the video “is deeply offensive to those of us living in Israel for whom guns and soldiers are a regrettable necessity. Idealizing or trivializing warfare is against our most basic Jewish values.”