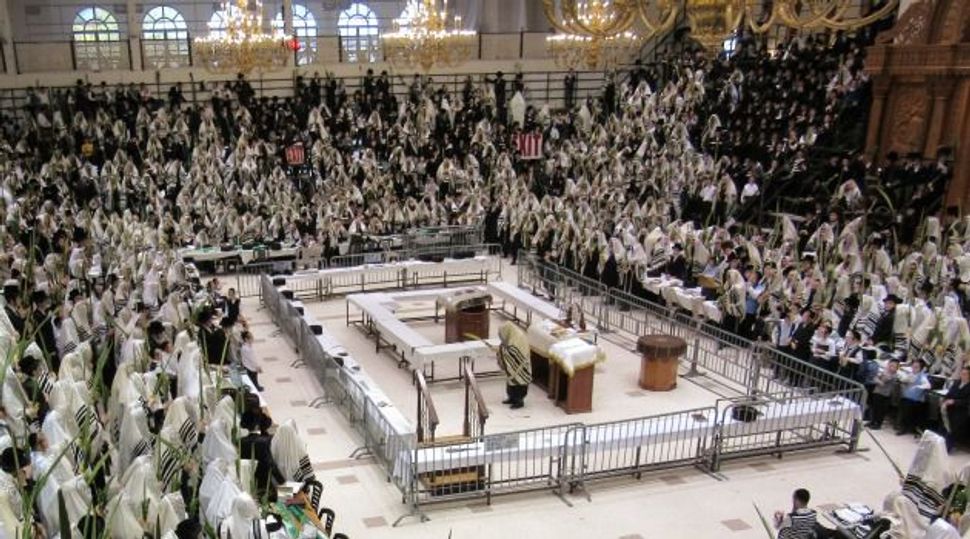 Rabbi Twersky’s followers gather around him at Sukkot services in New Square. Image by Sruly G.

Why are some of the most observant Jews in America planning to vote for Hillary Clinton on Tuesday?

Here’s a general rule of thumb: The more religious you are, the more likely it is you plan to vote for Donald Trump. Among white evangelicals, for instance, support for Trump increases with frequency of church attendance.

On the face of it, that rule also seems to hold true among Jews: While polls show typically high levels of Jewish support for Clinton, anecdotal evidence from Orthodox neighborhoods suggest that Trump is poised to do well among the minority of American Jews who belong to Orthodox communities.

Yet among the most observant American Jews, there are some key exceptions. In recent days, leaders of the Satmar Hasidim in Williamsburg, Brooklyn, and the Skver Hasidim in Rockland County, New York, have endorsed Clinton.

The Satmar and the Skver are among the most socially conservative and religiously observant Jewish groups in the United States. So why are they backing Hillary Clinton?

Those relationships run deep. The Satmar community in Williamsburg has been exceptionally successful over decades building ties to elected officials at all levels of government.

Their top criteria for which candidate to back? “They’re going to vote for the winner,” Pollock said.

That’s because the Williamsburg Jewish community, in particular, needs friends in government. The neighborhood is poor, and relies on government programs for housing and healthcare. So they tend to back Democrats, both because Democrats usually win in New York, and because Democrats support the social programs that they need. Since Jewish institutions play an outsized role in the lives of Hasidic Jews, endorsements from communal leaders carry an unusual amount of weight. For politicians, these bloc votes are attractive. “Williamsburg is one of the few places in American where politicians can attract votes wholesale, not retail,” Pollock said.

Sometimes these relationships are nakedly transactional. The Skver, for example, voted almost unanimously for Hillary Clinton during first race for Senate in New York in 2000. Weeks later, Bill Clinton shortened the sentences four Skver men convicted of defrauding the federal government. A federal investigation of the Skver commutations ended without any charges filed in 2002.

These days, unanimous bloc votes are more rare. The Satmar Hasidic sect has split into two warring factions, which at times have endorsed rival candidates. The Skver community has wrestled with its own internal dissent. “It’s not a perfect machine,” Pollock said.

Still, those blocs are far more disciplined than anything else in the Orthodox Jewish community. Outside of the most traditional Hasidic sects, ultra-Orthodox Jews are far less likely to support Clinton tomorrow. In fact, maps of voting results from New York City in 2012’s presidential election show that outside of Staten Island, no neighborhoods voted more heavily for Mitt Romney than Boro Park and Flatbush, both of which are heavily Orthodox.

Unlike Williamsburg, Boro Park has no central Jewish leadership. The neighborhood is a mishmash of Hasidic sects and non-Hasidic Orthodox groups. Flatbush is similarly heterogeneous. In those areas, where the political machines are less well-oiled, local elections often go to politicians who are at least nominally Democrats, and national elections go to the Republicans.

“On national elections, it’s because of values,” Pollock said.