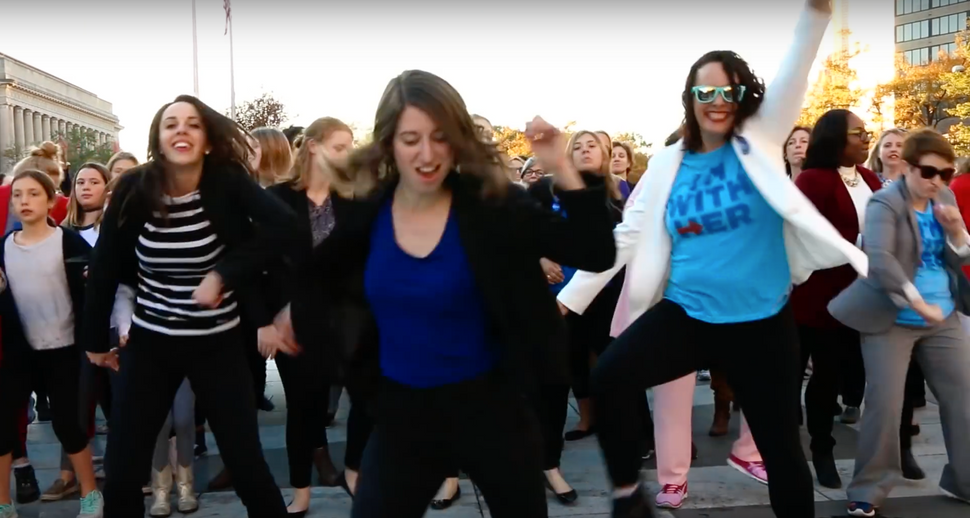 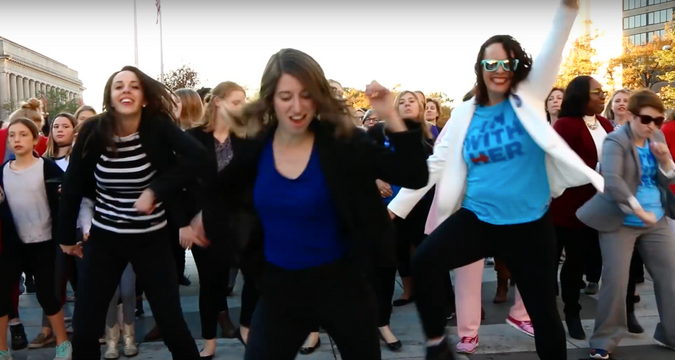 Hillary Clinton’s signature colorful pantsuits got a shout-out from over hundred women who staged a flashmob in support of the Democratic presidential candidate in Washington D.C.

The “DC Power Pantsuit Flashmob” was put on by a Jewish women: Jamie Poslosky.

“This whole thing came to be a few weeks ago,” Poslosky told the Forward. “I was feeling demoralized by the tone of the election, and I felt helpless about what I could do as one person.”

But then she got inspired by seeing videos of pro-Clinton dance flash mobs in cities like New York and wanted to bring them to the capitol.

Friends connected her with a dance director who created a simple choreography.

The flash mob took place in walking distance of the White House and across the street from the newly opened Trump Hotel. About 150 women (and a few men) of all ages donned pantsuits and showed their support for Clinton.

The pro Hillary Clinton flashmob was held just opposite to the new Trump Hotel in Washington, D.C. Image by DCPantsuitPower

Poslosky is very involved in the Jewish community, so she recruited a lot of the the dancers from that network.

“Just speaking personally, I think that what we show in the video, the community, supporting each other, sharing one message, a lot of that has roots in our Jewish values,” Poslosky told the Forward.

Both women hope that the energetic video will encourage and mobilize voters.

“My hope was that women see other women gathering together,” the dance choreographer, who asked not to be identified by name, said. “When women come together, we can do a lot together.”

For Poslosky it was a touching experience to to see how many girls and young women participated in the video. “You can see them getting really excited in the video, that’s what excites me,” she said.

“And that’s what Hillary is doing for women across the country.”

Editor’s note: The name of the dance choreographer originally appeared in the story, but was removed after publication at her request, because she received several threats by people opposing Hillary Clinton.