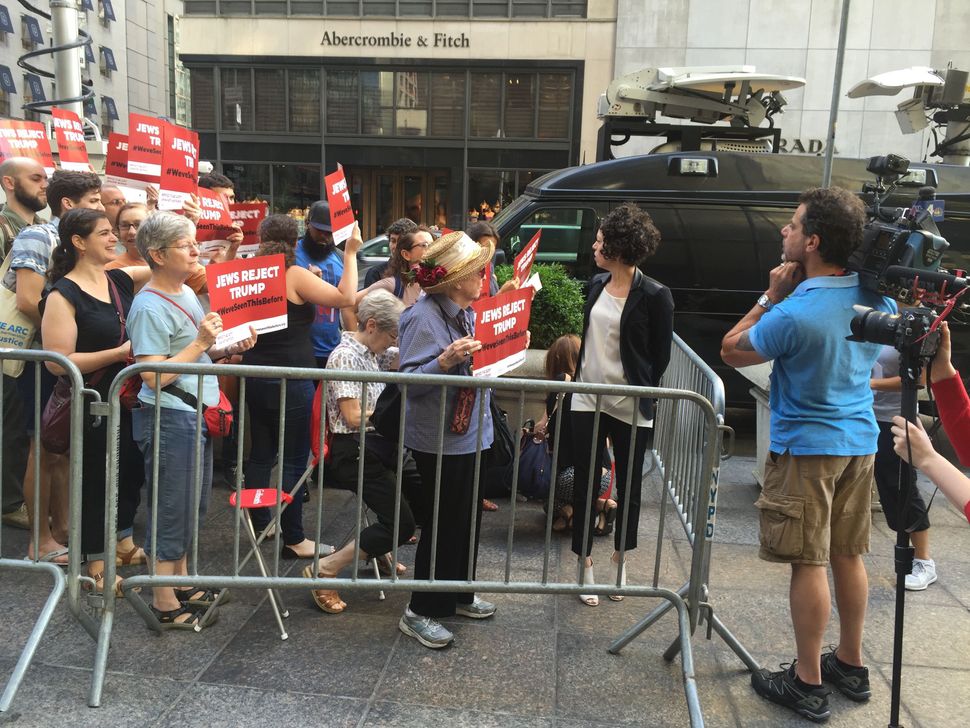 Bend the Arc Jewish Action joined other faith groups to speak out against Trump. Image by Veronika Bondarenko

An outcome no one had expected has left the Jewish community’s anti-Trump activists with a sense of disbelief. And while some tried to find a middle road, understanding that from now they’ll have to deal with a Trump administration, for better or worse, others couldn’t get over the political loss.

“While we do accept these results as legal and binding, we cannot call the idea of Donald Trump as president acceptable,” said Stosh Cotler, CEO of Bend the Arc Jewish Action in a statement. Her group had focused in recent months on defeating Trump, by staging rallies, organizing canvassing and trying to publicly shame Jewish groups that support Trump.

Trump’s positions on immigration, women, Muslims and other issues have led Bend the Arc to break with political tradition and refuse to accept the outcome. “Many will call on us to ‘respect the will of the people,’ and accept without question the actions of a Trump presidency, no matter how vile or immoral they are,” Cotler said, adding that it may be hard to fight the instinct of accepting the will of the voters, but Jews should “remain true to the values extolled by the ancient prophets, handed down to us by our courageous ancestors and which have guided our lives and our actions.”

This statement likely represented the sentiments of many Jewish pro-Clinton activists, like Shelly Rottenberg, an Indiana resident who volunteered for Hillary Clinton’s campaign in Ohio.

I woke at 334am to the most horrible news – I’m just so utterly devastated and confused! WHAT THE HELL HAPPENED?

Rabbi Arthur Waskow of the Shalom Center, a leading voice in the progressive end of the Jewish community, called upon the community to “first mourn” and then organize. “For the America we thought where at least a majority was too menshlich, too compassionate, to turn its own real pain and fear into imposing nightmare on ‘the Other.’”

J Street, the dovish pro-Israel lobby, did not endorse a presidential candidate, but was clear in its strong opposition to Trump. A day after it became clear that their effort did not bear fruit, the group’s president Jeremy Ben-Ami offered an understated response: “We are not particularly thrilled with our results at the top of the ticket,” he said, while vowing to “remain vigilant in our opposition to both the trump platform and the policies.”

Though difficult, J Street found its own silver lining in Tuesday’s elections. The group noted that Senate and House incumbents it endorsed who were attacked for their support for the Iran nuclear deal, all survived the challenges, proving that, “anti-diplomacy politics at the congressional level has no traction,” according to Ben-Ami.

Most intriguing among Jewish organizations response to Trump’s election was that of the Anti-Defamation League, a group not known for being partisan, which has gone on the attack time and again against Donald Trump because of anti-Semitic and bigoted undertones in his campaign. The group congratulated Trump victory, noting that “the voters have spoken, Secretary Clinton has conceded, and the civil transition of power is underway.”

Highlighting Trump’s election night pledge to heal the breach in American society, the ADL noted that “democracy is more than simply what occurs at the ballot box or during a particular election. Democracy encompasses the full collection of our laws, our norms and institutions that enshrine and protect our freedoms.”

The ADL, one of the largest and oldest Jewish groups, has worked closely throughout the years with every administration on issues relating to civil liberties, combating hate and countering anti-Semitism, and as such will likely find itself having to forge ties with a Trump administration, despite the tense relationship it had with him during the campaign.

For HIAS, the leading Jewish group working on issues of refugee resettlement, Trump’s policies and comments throughout the campaign about immigration and absorption of refugees in the United States, stood in stark contrast to the everything the group believes in. Now that Trump will have a chance to implement these policies, the group’s president and CEO Mark Hetfield tried to reach out. “We urge President-elect Trump to demonstrate that America is not afraid of refugees, and to show leadership for human rights and refugee protection during the global refugee crisis, the largest of its kind since the World War II,” he said, pledging that his group will continue to do everything in our power to ensure that the United States continues to protect refugees.”

And while the Jewish community’s liberal and Democratic activists failed to stop a Trump presidency, it was probably not the community’s fault. Democratic strategist Aaron Keyak noted that Trump won only 24% of the Jewish vote, 7% less than previous Republican candidate Mitt Romney. “On a night when Trump did better than Romney among almost every demographic, including Hispanics and African-Americans, Trump did significantly worse than Romney with the Jewish vote,” Keyak said. “There’s a major story, that Trump was elected president, but in the Jewish community, he didn’t do that well.”