Will Steve Bannon Be the Anti-Semitic Firebrand in Donald Trump’s Inner Circle? 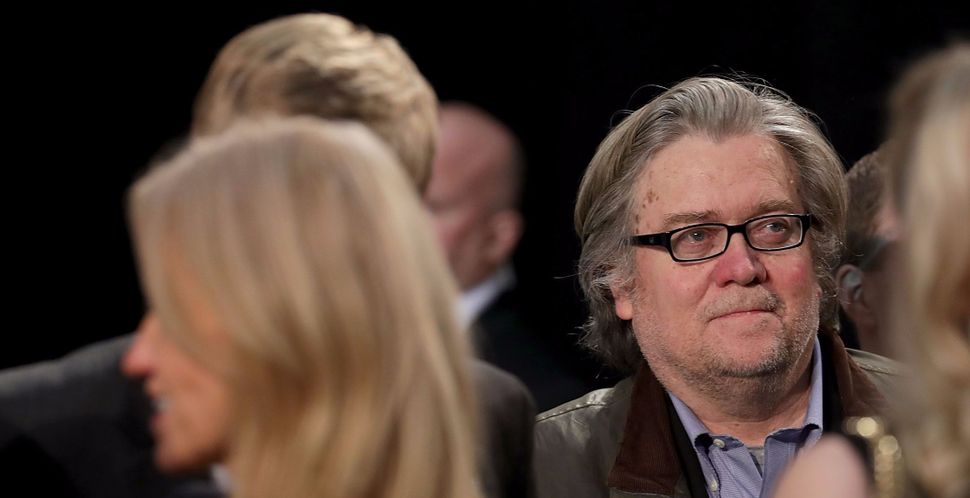 Steve Bannon, the right-wing media provocateur who turned Breitbart News into a haven for white supremacy, the so-called “alt-right” and anti-Semitic tropes, is poised to play a key role in the incoming administration — setting off a firestorm of criticism from Jewish leaders and anti-hate groups.

In fact, the official announcement of the appointments had Bannon’s name first, suggesting he could even be a more powerful player than Preibus.

The reaction was quick and furious from Jews and anti-hate groups. The Anti-Defamation League, which stays out of partisan politics and vowed to seek to work with Trump after his election, denounced Bannon as “hostile to American values.”

We at @ADL_National oppose the appt of Steve Bannon to sr role at @WhiteHouse bc he & his alt-right are so hostile to core American values pic.twitter.com/qCVEPKoa7q

Trump should rescind this hire. In his victory speech, Trump said he intended to be president for “all Americans.” Bannon should go.

Bannon transformed Breitbart News, which was founded by ultra-conservative Jewish journalist Andrew Breitbart, from a fringe site into a high-traffic haven for conspiracy theorists many of whom with neo-Nazi or white supremacist ties.

He is known as a take-no-prisoners political junkie, which may be why Trump has rewarded him with the position at the very pinnacle of his inner circle.

Even center-right Republicans were appalled.

The appointment also raises serious questions about Trump’s much-touted claim that he will be a strong supporter of Israel. Many on the alt-right regularly denounce Israel and international financial organizations as part of a worldwide power structure run by Jews.

The American Israel Public Affairs Committee, perhaps the leading face of the pro-Israel lobby, was reportedly upset about the appointment, but critics called on it to speak out publicly.

This election has shown us who the Nazis are. W/@AIPAC silence re: Bannon, we’re finding out who the Judenrat is as well.

If @AIPAC can’t speak up now – loudly and with unequivocal language – against Bannon, it has no business claiming to care about US Jews.

Besides offering a platform for racists and anti-Semites, Bannon has also been accused of anti-Semitism in his personal life.

His ex-wife, Mary Louise Piccard, reportedly claimed during their divorce that Bannon did not want their daughters to attend private schools in Los Angeles because there were too many Jewish students there.

He also asked why there were “so many Chanukkah books” in the library of another school.

Newt Gingrich, a senior Trump supporter who is a candidate to be secretary of state, shot back Sunday that Bannon could not be an anti-Semite because he worked in Hollywood and for Goldman Sachs.

Will Steve Bannon Be the Anti-Semitic Firebrand in Donald Trump’s Inner Circle?