When Trump Says ‘Globalists,’ Some Fans Hear ‘The Jews’ 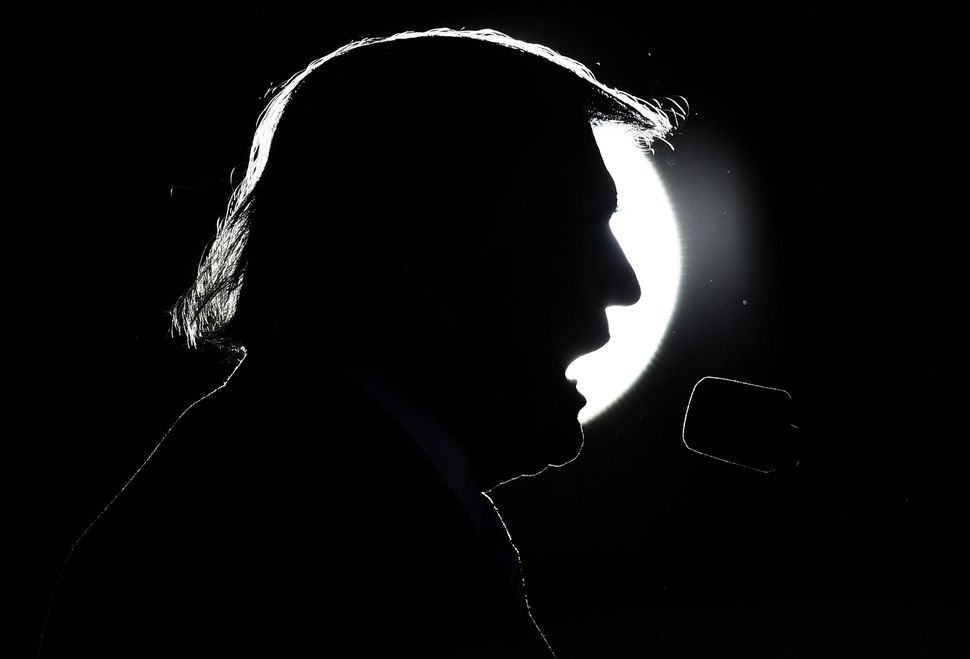 Throughout Donald Trump’s campaign he fashioned himself as a brash outsider, up against what he said was an economic and political system rigged against the American people. The system worked for the benefit of itself and shadowy, unnamed forces in the banks, the media and the government.

Trump and his supporters call those forces globalists.

Analysts and civil rights groups say the term can serve as a dog whistle for a range of conspiracy theories, some of them anti-Semitic. Trump has not himself given voice to those theories — nor has he distanced himself from them.

“Through the conspiracy-theory laden lens what they see is a plan or scheme designed by the elites,” said Ryan Lenz, the editor of Hatewatch, a blog of the Southern Poverty Law Center, “to further oppress hardworking liberty-loving patriots like themselves.”

When critics rail against “globalists,” they imagine a “devilish cabal,” said Lenz. “It’s a small jump from ‘globalist’ to ‘the Jews.’”

To be sure, criticism of globalism, globalists and the related term globalization are not only relegated to hard-right conspiracists. Bernie Sanders, the Vermont senator, also fashioned himself as an outsider campaigning against an international economic elite, and Wall Street. Others on the political left are also critical of the International Monetary Fund and trade deals which have historically privileged Western countries.

“Both men affirm their determination to rebuild an America weakened by unhealthy relationships with the outside world,” Harper’s publisher John MacArthur observed this summer.

When Trump says “globalism,” he means “an economic and political ideology which puts allegiance to international institutions ahead of the nation-state; seeks the unrestricted movement of goods, labor and people across borders; and rejects the principle that the citizens of a country are entitled to preference for jobs and other economic considerations as a virtue of their citizenship,” spokeswoman Hope Hicks told the New York Times before the election.

Knowingly or not, conspiracists who use the term are evoking older stereotypes about Jews.

Prejudice against Jews has complicated roots, both religious and economic.

Scholars theorize that modern anti-Semitism arose from an image of Jews as greedy, a perception that evolved in Medieval Europe, where a large number of Jews were involved in money lending because they were restricted from other professions. Christian leadership held money lending as an immoral practice, which further allowed for Jews to dominate the trade.

Jews also faced religious discrimination, perceived by Christians as being responsible for the death of Jesus Christ.

The myth of widespread Jewish control, though, was ushered into wide popularity in the 20th century.

One of most influential anti-Semitic tracts of this genre is the 1903 text “The Protocols of the Elders of Zion,” which purported to be a manual of a secret society of Jews who plotted world domination. Jews were cast as crooked and greedy, with networks which spanned the world.

Though exposed as a fraud, the myth of secret Jewish control — where Jews were seen as more devoted to global order than their country of residence — has persisted.

Today’s far-right signals a similar conspiratorial worldview when they use the term “globalist.” Though its main proponents do not explicitly link globalism to Jews, civil rights groups believe the older tropes still resonate.

At Breitbart News, the controversial website run by Steve Bannon, Trump’s newly appointed chief strategist, “globalist elites” were frequent targets. Bannon has described the far-right movements of Europe — and Trump’s own win — as part of a “global revolt” against an elite system.

But the true champion of such globalist conspiracy theories today is Alex Jones, the hard-right radio host of Infowars.

“We are attempting and having a lot of success at alerting the population of the United States, and to a great extent the rest of the world, to the private banking cartel’s global program to bankrupt every nation on earth,” Jones said in a typical broadcast in 2011.

“This is the essence of the new world order,” Jones said, “and I declare a declaration of human independence against it.”

Jones has pushed back against accusations that his tirades against globalists are actually about Jews, but he also sees the world as controlled by “mafias of all different stripes” — and Ari, Ezekiel and Rahm Emanuel are the head of the Jewish mafia.

Jones, like many other conspiracists, has celebrated Trump’s rise, even once comparing the president-elect to George Washington. And Trump has returned the praise, appearing on the show earlier this year.

“I will not let you down,” Trump said on the show. “You will be very, very impressed, I hope. And I think we’ll be speaking a lot.”

Jones even boasted that Trump called him after the election. (Trump’s team wouldn’t confirm that that the conversation took place.) If Trump is appreciative of Jones, and Jones is a champion of anti-globalist views, the dozens of blogs and Twitter accounts that support them both make the connection between Jews and global control explicit.

“The Jew’s Agenda is quite obvious folks: Turn America into another mere cog in the [new world order]… of Zionist Jewry; resulting in most of our noble White race turned into a Third World mud race slave and the rest a spat-upon minority.”

What Does Trump Think Himself?

The term “globalism” is elastic, and for this reason has been wielded as a powerful political tool.

“We will no longer surrender this country or its people to the false song of globalism,” Trump has said. “The nation-state remains the true foundation for happiness and harmony.”

Trump’s use of the word has brought with it accusations, from pundits and the Anti-Defamation League, that Trump was toying with anti-Semitic tropes. Many of Trump’s defenders saw accusations of anti-Semitism as a smear campaign, pointing to his Jewish children, aides and business colleagues.

“I don’t think Trump has explicitly drawn any connection between Jews and global elites,” said Mark Fenster, a law professor at University of Florida and author of “Conspiracy Theories: Secrecy and Power in American Culture.”

“But Trump has a lot of supporters who are much more explicit about drawing that connection,” said Fenster. “One thing that Trump could do — which he hasn’t — is to say he is opposed to a violent or otherwise extreme discriminatory behavior.”

The fact that Trump has not explicitly distanced himself from anti-Semitic conspiracy theories, Fenster said, “says a lot about his relationship with those who support him.”

When Trump Says ‘Globalists,’ Some Fans Hear ‘The Jews’