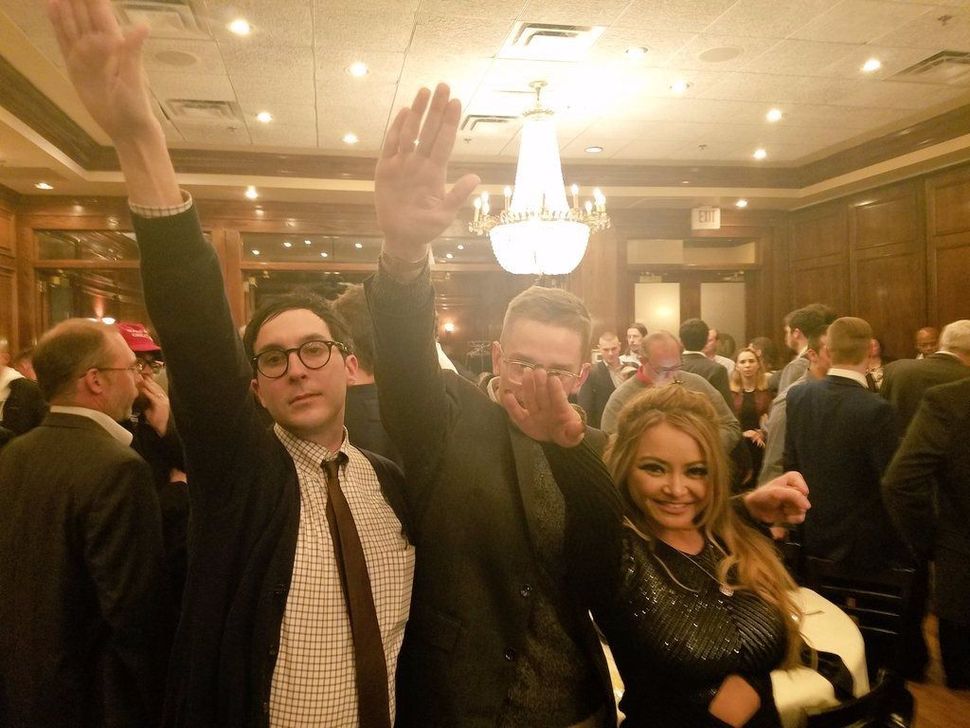 The three were standing inside a gathering of the “alt-right,” the white nationalist movement which has rallied around president-elect Donald Trump. The salute — known to some as a Nazi salute, to other’s as a Roman salute — was roundly denounced as offensive.

But few people knew — one of the men pictured is a Jew.

In a video filmed outside of Maggiano’s Little Italy in Washington D.C., one of the men who pictured making the gesture can be seen saying “We’re Jews and we’re going to see what it’s like,” Salon reported.

Some members of the “alt-right” objected to Jews being at the event altogether.

“I’m not even against throwing up Roman salutes at these conferences, and in fact find it hilarious,” Andrew Anglin wrote on the neo-Nazi website the Daily Stormer. “If Spencer is now going to be a representative of the neo-Nazi agenda, he needs to tighten-up his ship. The last thing we need is the world believing that neo-Nazis are just a bunch of kikes and gooks.”

Richard Spencer, a prominent spokesperson for the “alt-right” hopes to create a “white ethno-state” for people of “European backgrounds” and has compared his ethno-state to how the State of Israel is a homeland of Jews.

In the hours after the image of the salute — and a separate video of other members at the “alt-right” gathering saluting — went viral, Donald Trump “disavowed” the “alt-right” in a New York Times interview.

In a post written days later, the Jewish man pictured worried that the publicity around his picture may have damaged the movement. He was not concerned about what it meant to be a Jew at a white nationalist convention.

“None of the personal fallout since [the gathering] has bothered me on any deep level, even my own Jewish father seeing my face on MSNBC giving the Roman salute caused me little concern,” the man, who remains unnamed, wrote in a WordPress post which has since been removed.

“I never intended to detract attention away from the words of people I immensely respect” like Richard Spencer, he wrote. The author of the post went on to say how he is still devoted to the “alt-right” which he called a big-tent movement that needs to do some soul-searching as it moves forward.

He wrote: “almost all I am left with is my devotion to this movement, and my desire to work toward securing a future for our people.”