Ben Zion Shenker, a Master of Melodies, Made from Music a Life of Meaning 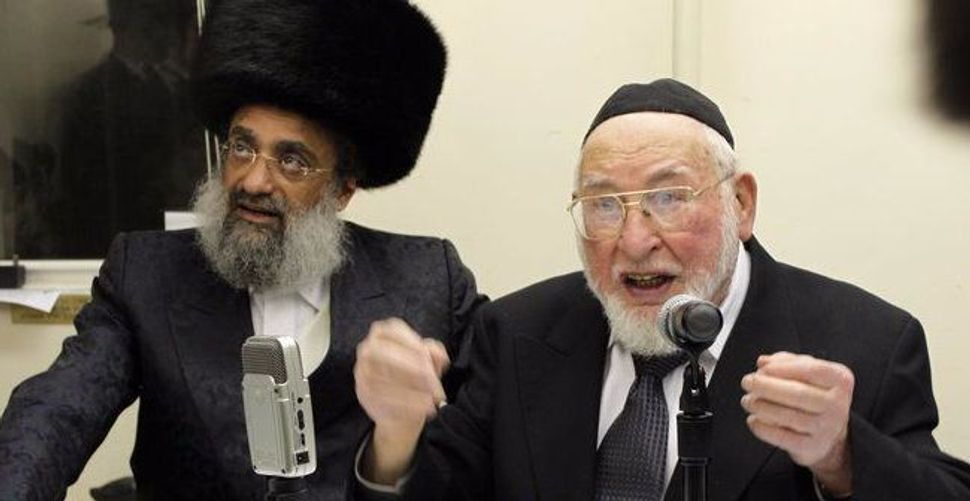 There are very few people who may honestly be referred to as “national treasures” — someone whose contributions are not to one or another group within our community, but to all of us together: old and young, wise and simple, religiously observant and less so. Rabbi Ben Zion Shenker, who died November 20 at the age of 91, was one these few.

Shenker was a master of melodies. And around the Sabbath and holiday table — not to mention at weddings, bar and bat mitzvahs, and happy occasions of every type — Shenker’s melodies permeate the air. They are, in fact, so thoroughly ubiquitous that we often don’t realize their provenance.

As hard as he worked on an oeuvre of perhaps over 800 tunes, I don’t think Shenker minded our ignorance. It was the use and enjoyment of his tunes that he cared most about. I say so having had the privilege of coming to know and befriend him in the last few years of his life.

Since first visiting the Modzitz shtibl, or small synagogue, on Coney Island Avenue in Brooklyn’s Flatbush, on a Sabbath afternoon in October 2013, I attended almost every public event at which Ben Zion performed, including his very last performance, during this past Sukkot. I was continuously amazed not only at what I heard, but also at what I saw. Ben Zion’s productivity was uncanny. He composed music constantly, beginning at age 16 until a couple of months before his death. As late as just a few days before his passing he was hard at work with the Grammy-nominated mandolinist Andy Statman on yet another album, to be their third together.

His dedication to the Modzitz Hasidic sect spanned four of the dynasty’s grand rabbis over more than seven decades, during which time he helped to notate and popularize the exalted tunes of Rabbi Shaul Yedidya Elazar Taub and his son, Rabbi Shmuel Eliyahu, in particular.

Ben Zion actually became the first person to record an album of Hasidic music in the United States, when, in 1956, he released “Modzitzer Melave Malka.” Today, even synagogues with more modern-leaning memberships use the Modzitz tunes he helped score or those he composed. Ben Zion’s productivity extended far beyond the recording studio. On the evening of the yahrzheits, or memorial anniversaries, of each Modzitzer rabbi, he would lead fellow enthusiasts in songs, many of which had been composed by the rabbi being celebrated. He would do the same at standing-room-only events he convened during Jewish holidays as well, arriving each time with a program set in mind, sheet music in hand.

When the present Modzitz rebbe visited Brooklyn last February, Ben Zion joined him in Boro Park. Hundreds came to the Friday night tisch, or gathering around the rebbe, where Ben Zion, then three months shy of his 91st birthday, led the crowd in resounding song until after midnight. I accompanied him from synagogue the following Sabbath day, and saw him stopped about 30 times over the three- or four-block journey by admiring fans, from fathers with young children to those close to his own age who still cry wistfully when singing his celebrated “Mizmor L’Dovid.”

For all the adulation, he was exceedingly humble — aware of his accomplishments but more mindful of their purpose in bringing people closer to God. He made time for anyone who wanted to ask him questions about his music or other Modzitz tunes. He was always available for public interviews. He often sang free of charge at the weddings of couples who could not afford to pay a singer, sometimes composing a new song for them, as well.

But when it came to the music itself, Ben Zion was not shy. In discussing his own firsthand knowledge of the history of the moving “Ani Ma’amin” tune composed by a Modzitzer hasid from Warsaw, he once noted publicly that there had been many distortions and “outrageous versions” of how the music had survived World War II and the Holocaust. Ben Zion proceeded to explain multiple reasons that such versions could not be true to the original.

During a visit with him last spring, he told me about a choir that had publicly performed a famous composition of the first Modzitzer rebbe, Rabbi Yisrael Taub. Ben Zion heard substantial changes in the music. The presenters, he said, had taken some license in their performance that he thought had gone too far, distorting the piece. “Some people really have a lot of nerve,” he lamented.

This exactitude in faithfulness to other people’s work also had its rewards. Last year, one of his protégés performed Rabbi Yisrael’s famous Ezkera tune — a 36-part masterpiece that takes some 20 minutes to sing. As the singer proceeded, Ben Zion sat clutching the sheet music, following along note by note to ensure it was being performed correctly. When his protégé finished, Ben Zion was ecstatic. “A-plus!” he exclaimed.

The importance of music was elemental for him. “It’s my life,” he once said. “I can’t live without it. It’s the air I breathe.”

Ben Zion’s funeral took place only a few hours after his sudden passing. As hard as I tried, I did not make it in time to hear any of the eulogies. The coffin was beginning its exit outside and into the hearse as I arrived. Much as I had joined him in the sunset of life, I caught but the last few moments with him as he left.

At that moment I was reminded of more than just the graceful melodies or the pitch-perfect voice. I recalled the music of a life of meaning. Then, I joined together with so many diverse yet interconnected circles of the Jewish people who today mourn his absence: religiously observant and less so, wise and simple, old and young.

Ben Zion Shenker, a Master of Melodies, Made from Music a Life of Meaning