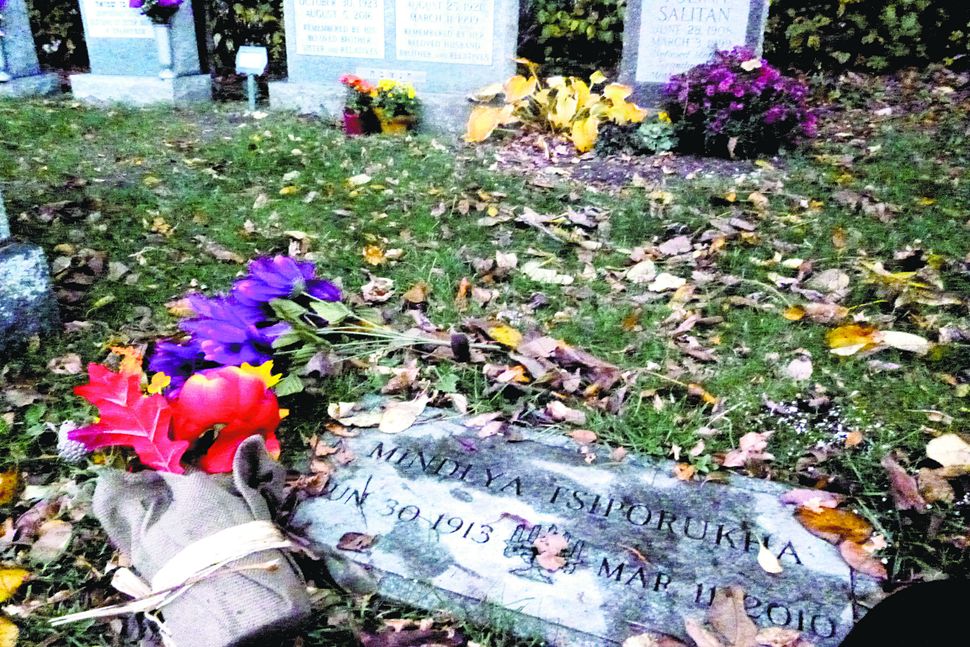 We often hear stories about how hard life was for Jews in Russia back in the day. Still, after they passed away, even poor Jews in the Russian Empire got to have gravestones.

If you travel around Ukraine and Poland these days, you’ll stumble upon Jewish cemeteries in almost every village where Jews used to live. They’re often located in the most picturesque part of the shtetl, frequently on a hill overlooking a river. The inscriptions on the ancient stones tell stories in Yiddish, Hebrew, Russian and German of lives long past, and they’re often adorned with pictures of animals and symbols.

In America today, though, we can’t afford gravestones anymore — not for everyone. And, in fact, there are Jewish organizations that are preventing people from putting gravestones on their loved ones’ graves.

“It is a matter of fairness,” said Stan Kaplan, executive director of the Jewish Cemetery Association of Massachusetts, the largest Jewish cemetery association in North America.

The association provides discounted funerals for any deceased person who died on Medicaid, a program for those with few assets.

Citing its own costs for these funerals, the association recently changed its regulations to prohibit such individuals from getting a traditional upright gravestone on their graves. The prohibition holds firm even if the deceased person’s family wants to buy the gravestone out of pocket. Instead, the cemetery provides them with just a flat marker — a small flat stone, which has room for some words, though not as much as a gravestone would. In winter, a flat marker may not be visible under the snow.

According to Yosef Hildershaim, president of Jewish Monuments, a monument manufacturing company that ships gravestones across the country from its production sites in New York and New Jersey: “Definitely, “Definitely, 100%, every cemetery has unmarked graves.”

Every now and then, Hildershaim said , he puts up stones on graves that had been unmarked for years. Recently he put up a stone on the grave of a mother who died 50 years ago after her son grew up and found his mother’s grave. Escalating Costs The problem comes down to the fact that the cost of an average Jewish funeral in the state has now reached about $10,000. In Massachusetts, the state provides $1,100 toward the funeral expenses of low-income residents — which is, clearly, only a fraction of the total. The cemetery buries the dead by discounting the cost, Kaplan said.

In addition to not being permitted to have a gravestone, those who get discounted funerals are also not permitted an obituary in the newspaper and must be buried in the cheapest caskets.

Similar practices exist in other parts of the country as well.

For example, in San Francisco, Jews whose families or friends do not have the funds to pay for a funeral end up in a separate cemetery, the Eternal Home Cemetery. Their graves are marked with flat markers, said Sharon Brusman, executive assistant at the Chevra Kadisha. If relatives want to erect an upright stone, they have to pay back the cost of the whole funeral, Brusman said — a policy that has been in place for a couple of years.

In Miami, upright stones are also not permitted for those who had discounted funerals.

“The cemetery knows not to accept delivery of any upright stone,” said Ari Oberstein, the funeral director at Florida Jewish Funerals, which provides discounted burials to Jews. “If the grave is being sponsored by charitable organizations, then the modest marker should be [enough].”

In some parts of the country, the graves of poor Jews have no stones at all. In Houston, the government provides no assistance toward the funerals of low-income people. If the deceased Jew left no money, the case is referred to Jewish Family Service. JFS organizes a Jewish burial (the cemeteries rotate to provide plots), but does not provide a gravestone, said Linda Burger, CEO of Jewish Family Service of Houston.

“The cemetery keeps a record, but we are not given resources to put a stone,” she said. “Sometimes, if someone grows up and they know where their parents are buried, they might be able at some point to put a marker.”

However, she said that the majority of people JFS assists don’t have any family.

But even those who have relatives don’t always get a gravestone.

Linda Bell-Spencer, project manager of Gaitz Memorials, a company that makes gravestones for Jewish cemeteries in Houston, recalled getting a call a few years ago from a woman who wanted to buy a gravestone for her son’s grave. “We created a drawing, and I sent it to the synagogue for approval – but they wouldn’t approve it, because she didn’t finish paying for her cemetery plot,” she recounted.

In fact, it is easier to afford a gravestone, which costs about $2,000, than a plot in the cemetery that’s owned by Temple Emanu El in Houston. The Reform synagogue charges nonmembers more than $6,500 for a burial space.

“She didn’t have any money” to pay for a plot and the associated synagogue fees, Bell-Spencer said, though she did have enough for the gravestone. “She was upset because she couldn’t place a stone on her son’s grave.”

About every three years, Temple Emanu El purchases about 30 markers for unmarked graves in its cemetery, Bell-Spencer said. She describes these as “baby-marker-size stones” — 10 inches by 20 inches each.

In other states, too, it is not uncommon for graves in Jewish cemeteries to remain unmarked for years.

In Massachusetts, for instance, due to the impact of the 2008 recession, some families are only now marking the graves of those who died in 2010, said Judith Caplan, director of records and documentation at the Jewish Cemetery Association of Massachusetts.

What’s Wrong With This?

Gravestones are a long-standing Jewish tradition that goes back to the Bible. In the book of Genesis, for example, Jacob marked Rachel’s grave when she died by the side of the road.

Marking the exact spot where someone is buried is important because “if we stand 2 feet to the right, we might be praying at the wrong person’s grave,” said Rabbi Nechemia Schusterman of Chabad of Peabody Jewish Center, in Peabody, Massachusetts.

Gravestones are, in a sense, connected to what it means to be Jewish, said Reform and Reconstructionist rabbi Joe Blair, from Harrisonburg, Virginia.

“Part of what makes Jews — Jews is that we maintain memory,” he said.

In Judaism, it is customary to mark the grave in a timely manner — at most a year after a person dies, the rabbis said. If you wait years, “you’ve gone through several yahrzeits and you’ve ignored [the deceased],” Blair said.

There is also a tradition of equality in Jewish cemeteries.

The custom goes back to the practice of burying the dead in simple coffins and shrouds, which is based on the premise that “everyone should be buried the same so that the poor are not embarrassed,” Blair said.

Indeed, many of those who work in today’s funeral industry find inequality in the cemetery disturbing.

For Burger, it’s almost better to have no marker on the grave than to put only cheap stones on the graves of the poor.

“I know one thing — I wouldn’t want for someone to walk into a cemetery and think, ‘Those six graves — those were all poor people — you can tell because of the stone,’” she said.

Kaplan said he doesn’t like the idea of paupers’ cemeteries, which still exist in parts of the country today.

“It sounds to me like a ghetto,” he said. “Are [the poor] not fit enough to be buried in a normal Jewish cemetery?”

Why is it that in one of the richest countries on earth, traditional gravestones have become unattainable for so many people?

The issue is not so much the cost of the stones themselves — but that cemeteries and synagogues use them as a way to make sure they get paid for other funeral-related charges.

“It’s the only way we can police the loss of revenue to the Jewish Cemetery Association,” Kaplan said.

Another problem is that in cases in which synagogues own the cemeteries, the sale of cemetery plots is sometimes used to raise revenue for the synagogue, Kaplan added.

“Frankly, it’s all over the country,” Kaplan said. “I think that’s appalling.”

Encouraging cemeteries to be independent from synagogues is one way to address the problem, he suggested.

Others said that, above all, we should remember that we erect gravestones not only for those who are living today, but also for those who will come after — the generations of the future.

“If there isn’t a stone, it doesn’t tell the story anymore,” she said. “I really hope people think about that when they make their marker today – because it really leaves a story for future generations.”