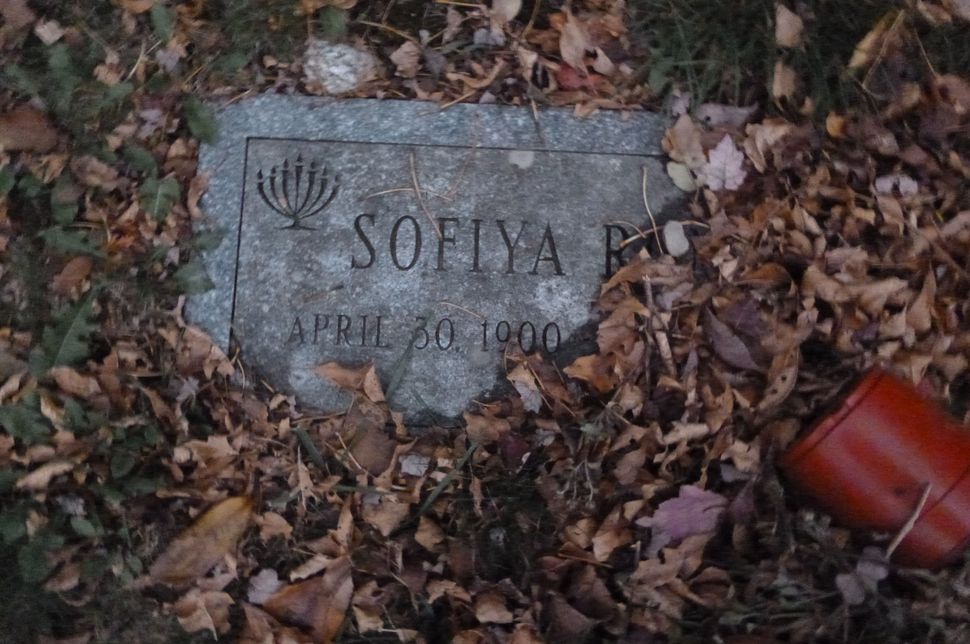 The grave of Sofiya Romm, a doctor who immigrated to the United States from Moscow, is hard to find in Ahavath Achim Anshe Sfard, the local Jewish cemetery here.

On a recent afternoon in November, only Romm’s first name was visible. The rest of the inscription was under a pile of brown autumn leaves. You had to sweep away the leaves with your hands to read the deceased woman’s family name and her date of death, revealing that she lived to be 98 years old. In the winter, after a snowfall, you wouldn’t find the grave at all.

Romm is one of the low-income Jews buried here after the Jewish Cemetery Association of Massachusetts, the largest Jewish cemetery association in North America, changed its rules stating that people who received a discounted burial would not be permitted a traditional gravestone even if their relatives wanted to pay for it out of pocket.

When Romm died, her son, who was an engineer, and daughter-in-law, a doctor in Moscow, were both in their 60s and living on government assistance. Having immigrated to America from Russia when they were nearing their old age, they never found jobs in their fields.

So they decided that they had to go with the flat marker.

“In Russia, everyone has upright gravestones. Everyone [from our family] who died there — my parents, my husband’s father — they have gravestones. But here it’s pretty hard,” Vera Romm said.

So nowadays, whenever he visits his mother’s grave, Sofiya Romm’s son, Arnold Romm, doesn’t just pray, but also finds some tree branches to clear away the fallen leaves and the soil. And in January, on the anniversary of his mother’s passing, he clears the snow.

Instead of focusing on the grave itself, the family tries to preserve memory in other ways — for example, by telling stories about the deceased ancestors to the grandchildren and great-grandchildren, Vera Romm said.

Despite the sorry state of Sofiya Romm’s flat marker, her grave is still better off than the fate that befell that of Seymour Zablatsky, who died and was buried in the same cemetery more than two years ago. His grave has no stone. Instead, it is marked by a small piece of paper sticking out of the ground on a metal stick. When reached by telephone recently, one of the deceased man’s sons, Jeff Zablatsky, said he wasn’t aware that his father’s grave had no gravestone.

“I have no idea what they did after the burial,” he said. “I haven’t been there, I haven’t seen it.”