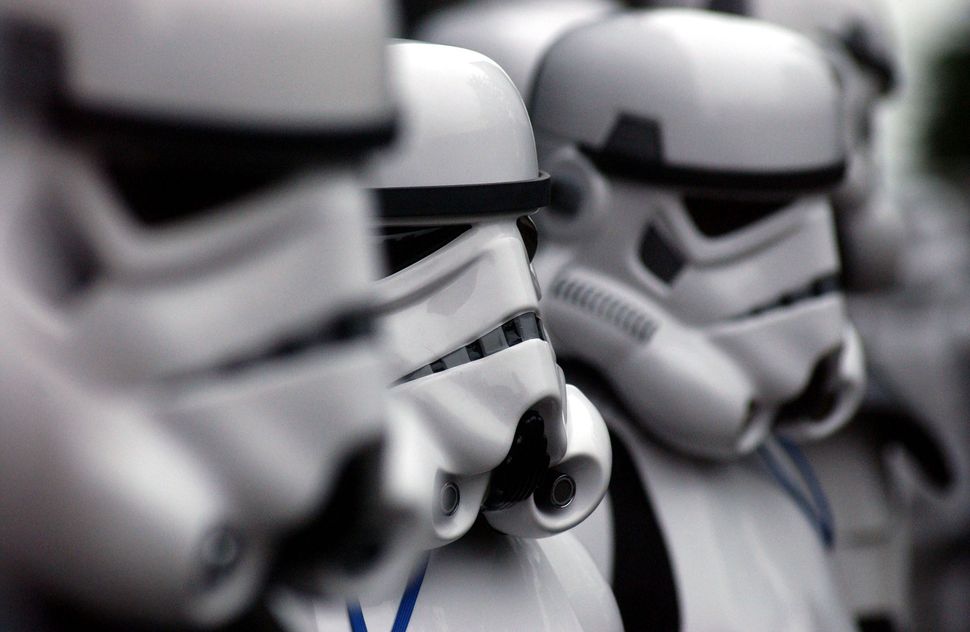 White supremacists are calling for a boycott of the latest “Star Wars” movie as evidence of a Jewish plot to foist racial diversity on whites, even as some on the “alt-right” say they watch the film and root for the evil Empire.

“(((Star Wars))) Is Anti-White Social Engineering,” a Reddit user named GenFrancoPepe posted in a forum for the “alt-right,” a hard-line white nationalist movement. The triple parenthesis, known as an “echo,” is a way anti-Semites online call attention to Jewish names or perceived Jewish influence.

The evidence: “Alt-right” writers point out the multiracial makeup of the stars in the new film, the female starring role, and that Jewish producers and writers were involved. Criticism of the film evokes one of the central tropes of modern anti-Semitism, envisioning a Jewish cabal promoting multiculturalism to suit its own nefarious goals — at the expense of an embattled “white civilization.”

One writer at the neo-Nazi site Infostormer “Rogue One: A Star Wars Story,” slated to be released this month, a product of “anti-white hate” produced by Jews. “Nearly all of the major characters are non-Whites and the main character is an empowered White female,” the post reads. “This film should be boycotted.”

“Remember to boycott all Star Wars movies!” another writer chimed in. 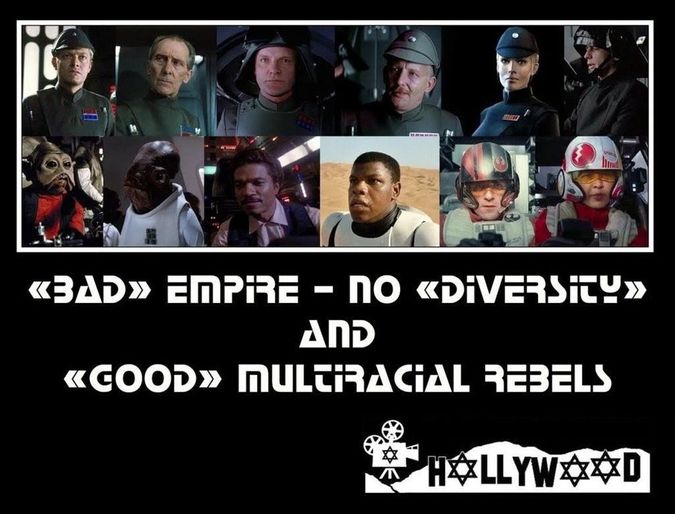 The original “Star Wars” films, released in the 1970s and ’80s, envision a universe where rag-tag rebel forces face off against an evil empire. The films draw from Nazi-era imagery and are widely seen as being about the dangers of fascism.

This year, actors and writers involved in the franchise have been drawn into a galaxy closer to home: U.S. politics. Mark Hamill, who played Luke Skywalker, criticized President-elect Donald Trump’s Cabinet picks as a “who’s-who of really despicable people.”

In the wake of Trump’s win, two writers of the new movie adopted the symbol of “Star Wars: Rebellion” as their own battle cry.

This is not the first time the “alt-right” campaigned against “Star Wars.” When the previous film was released, in 2015, the movement rallied around the hashtag #BoycottStarWarsVII to protest the black actor cast in a leading role.

But for some conservative thinkers and others in the far right, the evil Darth Vader is the hero.

In 2002, when an earlier chapter of the “Star Wars” saga was released, The Weekly Standard’s Jonathan V. Last wrote a post called “The Case for the Empire,” in which he argued that Star Wars creator George Lucas “confused the good guys with the bad.” “The deep lesson of ‘Star Wars’ is that the Empire is good,” he wrote.

Earlier this month, Steve Bannon, whose website Breitbart News is a platform for the “alt-right,” compared himself to the most famous villain of the “Star Wars” franchise. “Darkness is good… Dick Cheney. Darth Vader. Satan. That’s power,” Bannon said in a Hollywood Reporter interview.

Some members of the “alt-right” said they wouldn’t boycott “Star Wars.” Instead they would watch the film — and cheer on the Empire.

Anyone else wish there were a ‘Star Warsp movie where the Empire crushes the multicultural degenerate virtue signaling rebels?

“If you’re annoyed by their allegories then don’t watch it. If you’re like me you’ll pirate it at some point and fantasize about being a stormtrooper,” one commenter on Reddit said.

On the same thread, another “alt-right” member weighed in: “We know which side we prefer. Always buy the Empire Legos. Always root for Hitler. Always retell the story your own way.”