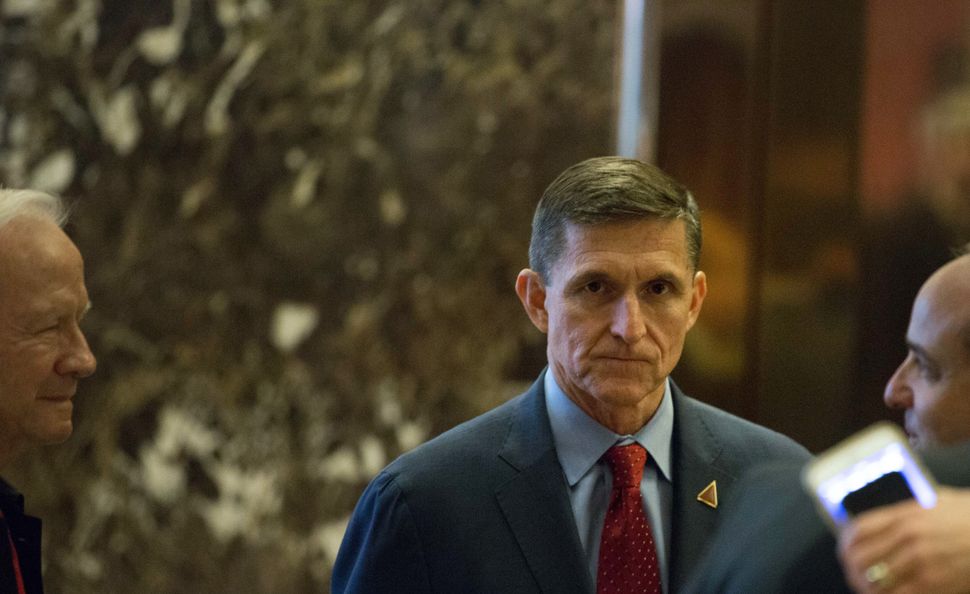 Lt. Gen. Michael Flynn, Donald Trump’s pick to head the National Security Administration, has landed in the middle of a complex controversy including his son, a penchant for spreading fake news — and anti-Semitism on Twitter.

Flynn has come under attack for retweeting a fake news item that appeared to be related to the so-called #Pizzagate conspiracy theory in which far right wing activists spread false claims that a Washington D.C. pizzeria was somehow involved in a pedophilia ring with supposed ties to Bill and Hillary Clinton.

His son, Michael Flynn Jr., has repeatedly promoted bogus news about the #Pizzagate story and insisted that he considers the allegations to be important until proven false. The younger Flynn is also working for the Trump transition team and has been his father’s de facto chief of staff in recent months.

The #Pizzagate story, which has been a major issue for right-wing fringe groups for months, exploded into mainstream consciousness Sunday when a North Carolina man armed with a rifle opened fire after going to the restaurant to “investigate” the bogus news claims.

Flynn Sr. had nothing to do with the attack and the Washington Post reports his Tweet may have actually been about Bill Clinton’s ties to disgraced financier and convicted pedophile Jeffrey Epstein.

But it’s not the first time the older Flynn has been accused of being much too cozy with the radical right on social media, including anti-Semites.

Flynn retweeted a blatently anti-Semitic post over the summer, and then apologized, saying it was in error.

The tweet, from a user called Saint Bibiana, alleged that Jews were blaming the former Soviet Union for leaks that were published recently from internal Democratic National Committee emails.

“CNN implicated,” reads the tweet sent Sunday. “‘The USSR is to blame!’ Not anymore, Jews. Not anymore.” 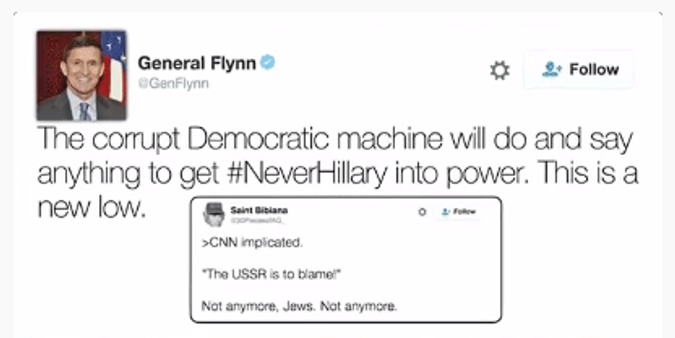 Retweeting a few days later, Flynn wrote, “The corrupt Democratic machine will do and say anything to get #NeverHillary into power. This is new low.”

Soon afterward, Flynn tweeted that he had meant to retweet a link from CNN and apologized for his earlier tweet.

“The earlier retweet was a mistake,” he wrote. “My sincerest apologies.”

Flynn has also tagged in his tweets Jared Wyland, an anti-Semitic commentator who often tweets about the “Liberal Jewish media,” CNN reported.

Flynn also shared some of Wyland’s tweets that linked to videos, including ones with Islamophobic messages.

“We are talking about some of the most bizarre conspiracy theories out there,” Singer, now a national security strategist at the think tank New America, told Politico. “We are down the rabbit hole.”

“It is incumbent on Trump, his nominee for national security adviser, Gen. Flynn, and his entire team to disavow these falsehoods and conspiracy theories,” said Schiff, who is Jewish. “They will soon have a country to run, and God help us if they conduct the nation’s affairs like their transition — without the willingness or ability to separate fact from fiction.”