The Secret Jewish History of Kwanzaa 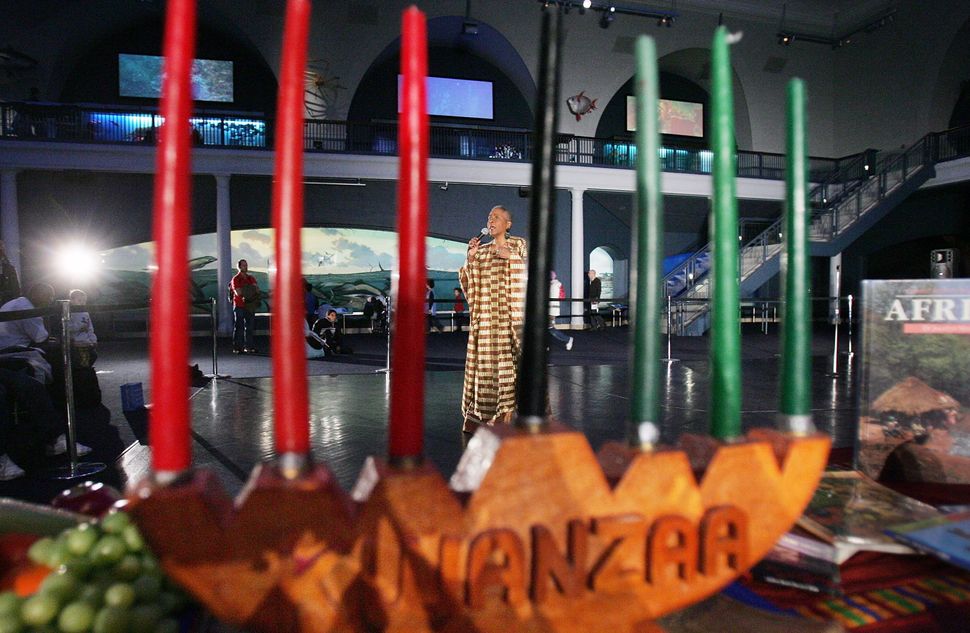 Fifty years ago, at the inaugural celebration of Kwanzaa, 60 black Americans gathered in a California living room to celebrate their distant African past.

It was 1966. They wore dashikis and hand-woven headwear. A troupe of musicians played drums. Men and women bowed to each other and poured libations to the ancestors. Later, someone switched on the stereo and turned up the music of James Brown and Curtis Mayfield as the crowd danced.

But the central ritual of the entire evening — the ceremony everyone had come for — involved lighting a modified Hanukkah menorah.

It is just one of many connections between the harvest-themed celebration of African-American heritage and the Jewish festival of lights.

The very first Kwanzaa candelabrum was made by altering a Jewish menorah; celebrants held joint Kwanzaa-Hanukkah celebrations regularly in the early years and when critics attacked the newly-formed black holiday they also leveled criticism at Hanukkah. Detractors saw both festivals as multicultural and “politically correct” incursions on their white Christian holiday season.

Kwanzaa, an annual weeklong holiday that starts on December 26, was born in the political ferment of the 1960s as part of a newly-energized and Africa-focused black consciousness. Maulana Karenga, a prominent black nationalist and then-doctoral student created the holiday. Early enthusiasts wanted to distance themselves from Christmas and Christianity, which some saw as a white religion.

In Hanukkah, each candle on the candelabra represents a day of the holiday; in Kwanzaa, each stands for a life principle.

The principles, in Swahili and English, are: umoja (unity), kujichagulia (self-determination), ujima (collective work and responsibility), ujamma (cooperative economics), nia (purpose), kuumba (creativity), imani (faith). Kwanzaa is an opportunity to meditate on these principles and put them into practice.

To prepare for that first festive night in 1966, Karenga searched for a candleholder with seven holes but couldn’t find one, historian Peniel Joseph wrote in “The Black Power Movement.”

“Unable to find a seven-hole candleholder in the Los Angeles area,” Joseph wrote, Karenga “used a nine-hole Jewish menorah and broke off two of the openings.”

And so the first Kwanzaa menorah, or kinara, was born.

And while joint Kwanzaa-Christmas events were rare at first, Kwanzaa and Hanukkah events were more common.

According to Keith Mayes, a professor of African American and African Studies at the University of Minnesota and author of “Kwanzaa: Black Power and the Making of the African-American Holiday Tradition,” confusion sometimes arose from linking Kwanzaa and Christmas, but “Kwanzaa and Hanukkah went together more smoothly.”

“Joint Kwanzaa and Hanukkah celebrations bridged the divide between African-Americans and Jews, allowing both groups to share in the memory of suffering,” Mayes wrote in his book which chronicled the inaugural ceremony and the formative years of the holiday.

Kwanzaa’s creator Karenga makes the distinction between religious and cultural holidays. He emphasizes that he is drawing from older African models, not copying other modern traditions.

“Kwanzaa’s model is older than Christmas and Hanukkah and thus does not … seek to imitate them in any in an interview.

“Kwanzaa is not a religious holiday, but a cultural one with an inherent spiritual quality,” Karenga wrote on the official Kwanzaa website. People of “all faiths can and do celebrate Kwanzaa,” he wrote, including Muslims, Christians, Black Hebrews, Jews, Buddhists, Baha’i and Hindus.”

Kwanzaa features no set meal, but celebrations often feature foods of Africa, or the African diaspora.

Kwanzaa’s emergence on the national stage also triggered backlash. Some disgruntled Americans mouthed off in local newspapers about the encroachment of “political correctness.”

“People who worship political correctness may think Kwanzaa rises to the level of comparability to the world’s great religions,” one resident of southern California wrote in the 1990s in the Union-Tribune, “but it is a clumping together of borrowed things.”

Robert Ulrich, a white executive of Texaco, made dismissive comments about the holiday that were caught on tape in 1996. Ulrich also bemoaned the push for diversity at his company and called African-American employees “black jelly beans.” By some accounts he also spoke about “f—king n—-ers” working at his company.

For Ulrich, and other white Christians, Hanukkah and Kwanzaa were both part of a push for diversity and multiculturalism in national spaces — one which they resisted.

“I’m still having trouble with Hanukkah,” he said, “now we have Kwanzaa.”

The Secret Jewish History of Kwanzaa