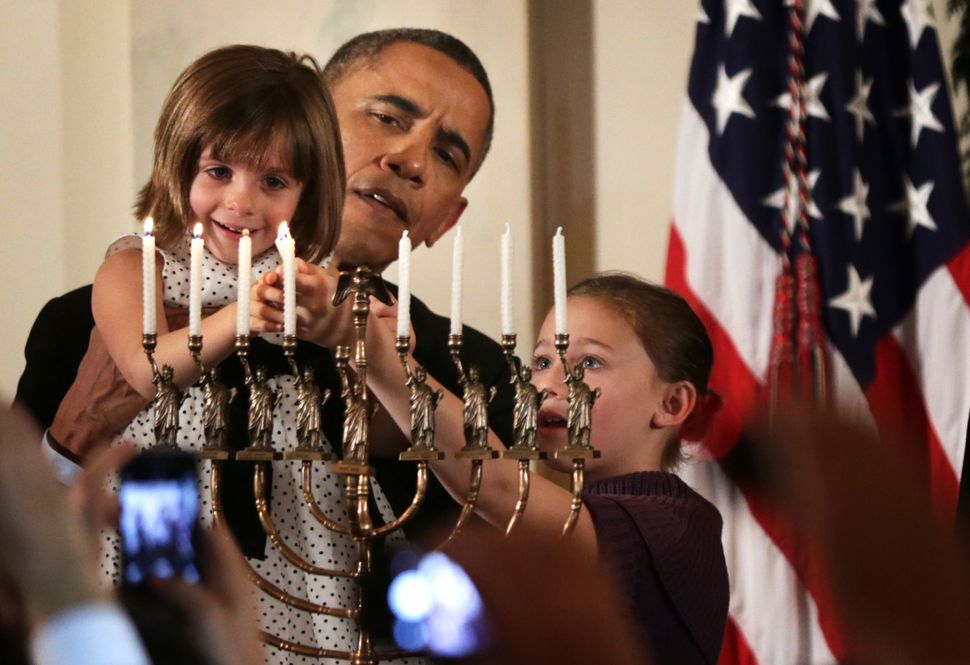 “For those of us who are partisan Democrats, this is not just a sad goodbye to President Obama, but also to the White House Hanukkah parties,” said a Washington activist who had attended many of Obama’s candle lighting receptions. “We’re facing at least four years in the White House invite desert.”

For Jewish Democrats, the annual gathering will not be the joyful event it has been, as attendees will inevitably reflect on the time of political access and shared ideology that’s coming to an end. But liberal Jews — and about three quarters of the community votes Democrat — enjoyed the party and the administration that hosted it while it lasted. And the administration made good use of the event to build a supportive network of community leaders.

In the security line snaking outside the White House on December 14, Jewish movers and shakers will wonder, as in past years, who will be there next year. The difference: Most of them won’t be.

“It will be bittersweet,” said Washington filmmaker Aviva Kempner, who intends to participate in this year’s reception as she did in previous events hosted by Obama. “I look forward with excitement and sadness. It’s an end of an inspiring era.”

White House Hanukkah parties are not an Obama invention. They date back to President Bill Clinton, who added a menorah lighting to the president’s holiday schedule. President George W. Bush, despite his relative lack of popularity among Jewish voters in 2000, turned the event into a party reception, attended by Jewish community leaders. Under Obama, the event ballooned to include hundreds of invitees and forced organizers to split it into two separate party receptions held on the same day, with Obama getting a chance to preside over the menorah lighting twice.

Last year, the event honored guest Israel’s president, Reuven Rivlin. This year, Chemi Peres and Mika Almog, the son and granddaughter of the late Israeli president Shimon Peres, will be there. They will bring with them from Israel the Peres family menorah, which has been passed down since the Holocaust.

In eight years of Hanukkah parties, Obama gradually reshaped the map of Jewish influencers. The list of invitees, formulated by the White House liaison to the Jewish community after painstakingly sifting through hundreds of names, has evolved into a snapshot of Obama’s America – more diverse, much more liberal and less centralized. Jewish organizational bigwigs and donors, while still invited, became part of a mix with local rabbis from across the country, Jewish startup groups and social activists.

The diversity of Obama’s Hanukkah receptions, recalled Matt Nosanchuk, who served as liaison to the Jewish community from 2013 to 2016, was demonstrated clearly at the 2014 Hanukkah party, when on stage, alongside the first African American president and First Lady, stood an Ethiopian-Israeli Jew, a gay doctor who travelled to Africa during the Ebola crisis and the first Asian-American woman ordained rabbi, who delivered the blessings. “And that embodied the spirit of what it meant to celebrate Hanukkah in the Obama White House,” Nosanchuk said. For the former adviser, who noted he was not a “professional Jew” before joining the administration and therefore never on the invitee list, attending the party “felt especially meaningful.” Nosanchuk described the experience as moving, adding that he wiped a tear or two” from his eyes during the ceremony.

And last year, in yet another show of how Obama’s Hanukkah party has become a platform for liberal Jewish activists, the White House chose Rabbi Susan Talve from St. Louis to lead the ceremony. In her blessing, Rabbi Talve managed to fit in almost all progressive causes, from Black Lives Matter to Women of the Wall.

But the reception, said Jarrod Bernstein, another former Obama liaison to the community, was not supposed to be an echo chamber for likeminded Jewish Democrats.

“It’s a day when regardless of where you are on the political spectrum, you can be proud,” he said. According to Bernstein, who served in the position between 2011 – 2013, the White House made an effort to include “respectful critics” of Obama, although those he described as “vocal to the point of it not being productive to have them there,” were not invited. In recent years, the Republican Jewish Coalition and the Zionist Organization of America were not on the list. But Malcolm Hoenlein, head of the Conference of Presidents of Major American Jewish Organizations who had criticized Obama’s Iran deal, was in frequent attendance.

Bernstein described the annual Hanukkah gathering as an “incredibly useful tool” for engaging with the Jewish community. It now includes also a set of policy briefings before the reception, and is timed to fit before the Congressional menorah lighting hosted in recent years by Florida Democrat Debbie Wasserman Schultz.

For the Jewish community, the event evolved under Obama into a status symbol; days after the event, the community’s collective Facebook feed was crammed with selfies next to hundreds of other lucky Jewish politicians and activists in the crush alongside the buffet tables.

Starting with Bush’s Hanukkah reception, the White House made a point of making its kitchen kosher for a day, a labor-intensive task that gradually become a tradition in itself for the White House cook staff.

“The fact that the residence of the leader of the free world becomes kosher for 24 hours is the ultimate sign of the status of minorities in America,” said Bernstein.

Former liaisons and Jewish Democrats involved in Hanukkah receptions throughout the years estimated that next year, under Trump, at least half of the faces attending the event will be new. But no one has any idea of what a Trump Hanukkah party will look like. With the president-elect’s Jewish daughter and son-in-law now planning to move to Washington, Trump is bound to have his in-house experts helping out through the maze of candles, latkes, and Jewish politics.