Shmuley Boteach Tweets Picture With Bannon, Gets a Bit Trump-Like on Twitter 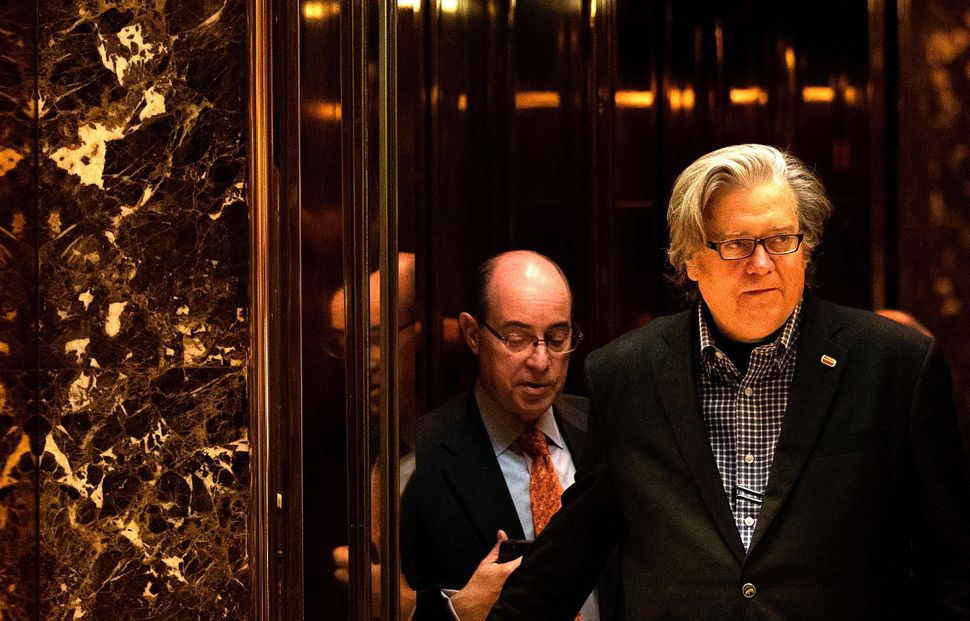 In the midst of a long run of tweets of photos of himself with famous people, the author of “Kosher Sex” posted a doozy: A picture of himself with Steve Bannon, the alt-right media mogul who Donald Trump will nominate to serve as a senior counselor in the White House.

The Anti-Defamation League has opposed Bannon’s nomination, objecting to his ties to the anti-Semitic and racist alt-right, and calling his nomination a “sad day.”

In Boteach’s tweet, the two are posing together as Boteach grins.

Boteach, who ran an unsuccessful campaign for Congress as a Republican in 2012, endorsed Trump in an op-ed in May, but then told the JTA in June that he had not decided whether he would vote for Trump.

The backlash to Boteach’s Bannon tweet was severe. “What is wrong with you?” asked a Twitter user whose profile is a picture of a hamburger.

Less than an hour later, Boteach doubled down, posting another picture of himself with Bannon. “Steve Bannon has shown great support for Israel & this administration promises to be very strong for the Jewish state,” Boteach wrote.

@RabbiShmuley Your job as a rabbi is to offer reproof for the hatred and violence this campaign has engendered, not puff up your ego.

That’s when Boteach’s tweets got strange.

As the backlash continued, a producer on the daytime talk show The Ellen Show tweeted that Boteach is “shameless and only cares about fame.”

He seems to have struck a nerve. At first, Boteach responded gently.

“I have too high an opinion of you to respond in kind,” he wrote.

But he didn’t stop there.

And then, at 12:14 A.M. ET, Boteach did something very weird: He suggested that he knows the Ellen producer’s “secrets.”

Good thing we know each other’s secrets Andy. You know what they say about people in glass houses…. https://t.co/HJM9tApwjI

Afterwards, Boteach went back to posting pictures of himself with famous people.

Shmuley Boteach Tweets Picture With Bannon, Gets a Bit Trump-Like on Twitter