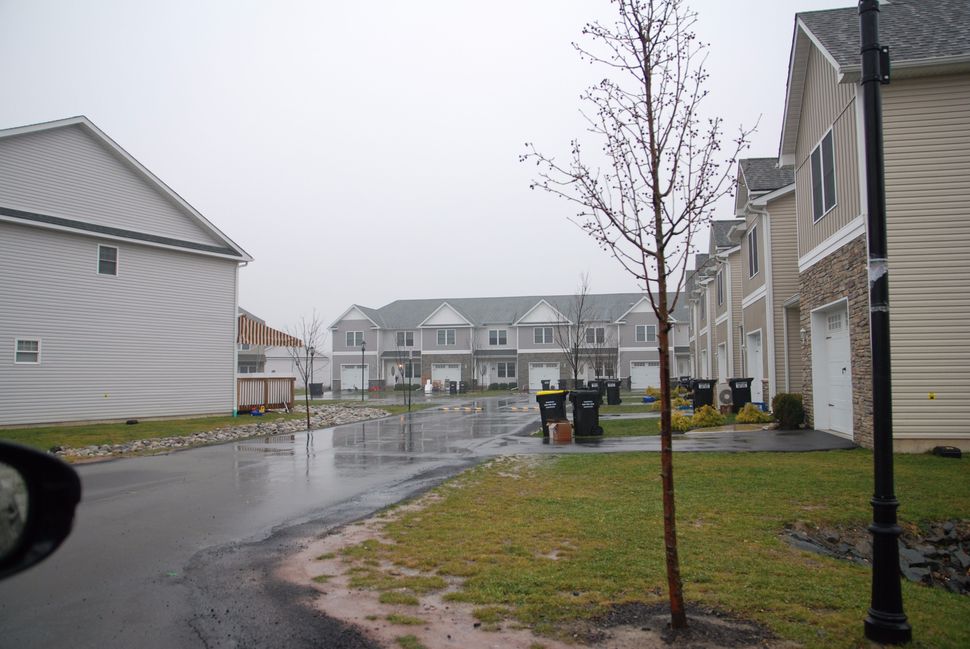 Two weeks ago, it seemed like the Satmar Hasidim had won the fight for Bloomingburg.

The tiny village 80 miles north of New York City had been the site of a raging battle between an Orthodox developer named Shalom Lamm and a group of stubborn locals for four years over Lamm’s plans to build homes for thousands of Hasidic Jews.

But that fight appeared to be over.

In late November, the Satmar yeshiva in town was nearly ready to open, and new Hasidic families were moving in every day. A new Hasidic village was rising in Bloomingburg, and it seemed that all opposition had failed.

But the morning of December 15, the Federal Bureau of Investigation turned the whole thing upside down.

Federal agents arrested Lamm; his business partner, Kenneth Nakdimen, and a young Satmar man named Volvy Smilowitz. Prosecutors with the United States Attorney’s Office for the Southern District of New York indicted the men on charges of conspiring to corrupt the electoral process. 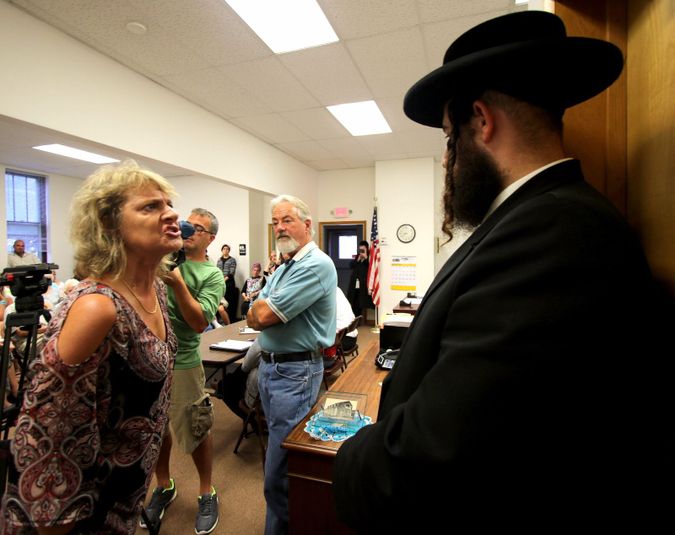 At a heated Village Board meeting in Bloomingburg this August, a woman yells at Moshe Meisels. Image by Times Herald-Record/Jim Sabastian

According to prosecutors, after Bloomingburg’s planning board blocked portions of the development project in late 2013, Lamm and his co-defendants conspired to rig the village’s 2014 mayoral elections by registering people who were not actually eligible to vote.

Attorneys for Smilowitz and Lamm deny the charges. An attorney for Nakdimen did not immediately respond to a request for comment.

(For more details on the charges and statements from the attorneys, click here.)

The indictment throws the burgeoning Satmar hegemony in Bloomingburg into question. The recent progress for the developers and their Hasidic clients is due in large part to a village government that is increasingly friendly to Lamm. And that village government is in power due to votes taken after alleged voter registration conspiracy took place.

Lamm’s favored candidate actually lost the 2014 mayoral election, after local anti-development activists challenged over 100 ballots. But Lamm’s side has won all subsequent village votes. In 2014, a referendum supported by anti-development activists that would have to dissolved the village government failed. And in early 2016, the village elected a pro-Lamm mayor and village board.

That board has lifted stoppages on construction in the village put in place by the previous government. And the new pro-Lamm village board also voted in July to take responsibilities for planning and zoning in the village away from the town of Mamakating, where local government is unfriendly to Lamm’s development.

It’s not clear at this point what ramifications, if any, the indictments will have for local government in Bloomingburg. The Hasidic community there is dug in deep. Zalman Teitelbaum, the rebbe of the Satmar Hasidic sect who is based in Brooklyn’s Williamsburg, has given his blessing to the village, and the Satmar community now sees the growing Hasidic community there as an official outpost under Teitelbaum’s oversight. The rebbe has made multiple visits to the Satmar yeshiva construction site. 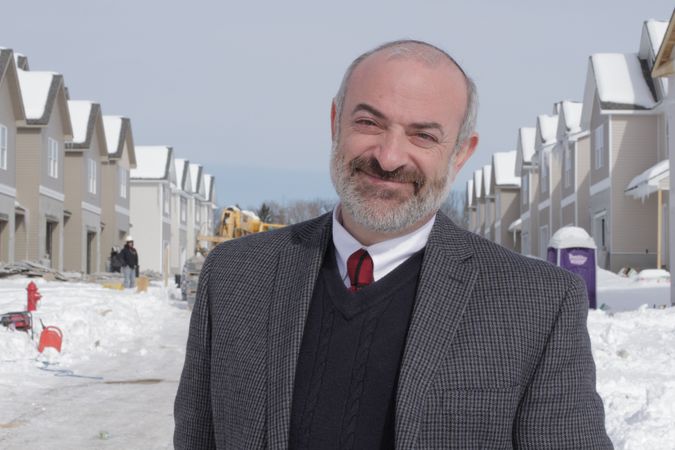 (For more on Teitelbaum and his followers, see the Forward feature published shortly before the arrests.)

Moshe Meisels, a 25-year-old Hasidic Bloomingburg resident, said that news trucks were parked near Chestnut Ridge on Thursday morning. “People are not worried, because we went through so much the last few years,” he said. “Time will tell.” 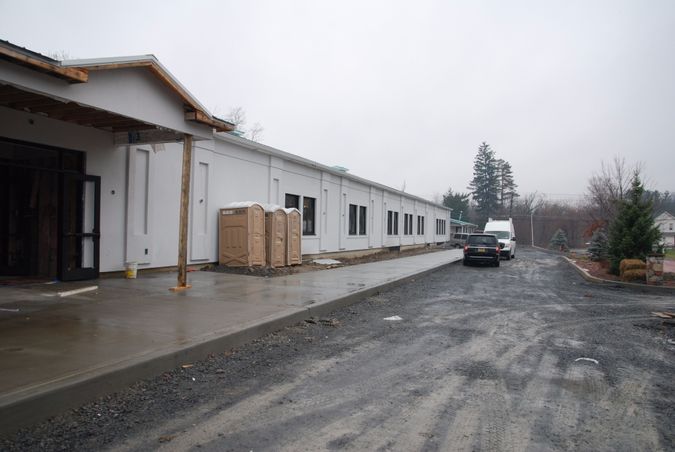 Opponents of the development, meanwhile, are hoping that this is the beginning of an unraveling. “I hope this is the tip of the iceberg,” said Danny Wise, who lives nearby the Chestnut Ridge development.

Meanwhile, the indictment makes for stunning reading. Prosecutors claim that Lamm and others submitted false voter registration forms in 2014. The people listed on the forms did not live at the addresses listed, which were homes owned by Lamm that were empty and in some cases uninhabitable. In order to make the apartments look full, the co-defendants allegedly put toothbrushes inside, and created fake back-dated leases.

A “to-do” list created by Lamm and Smilowitz a month before the election included the items: “Write leases up for everyone, dated to March 15,” and “Pick up home goods and furnishings from Walmart for every apartment.”

Lamm allegedly told one person that he would pay $500 for every voter that that person could procure. Lamm’s firm eventually paid that person $30,000. 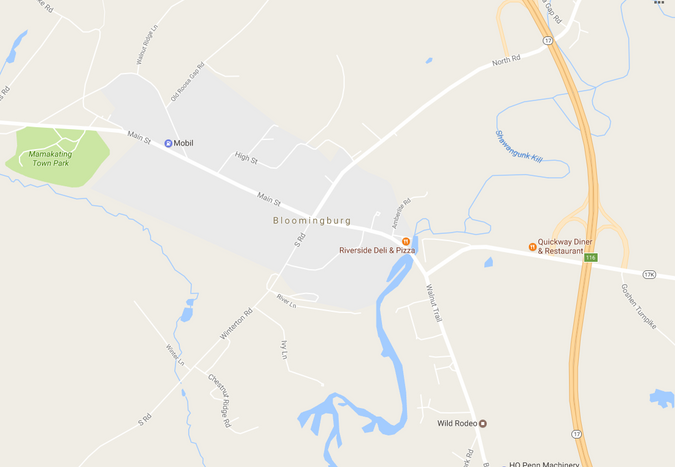 Bloomingburg is a tiny village in Sullivan County, New York. The Chestnut Ridge development is just south of town, on Winterton Road. Image by Google Maps

“In pursuit of millions of dollars in profits from a real estate development project, the defendants allegedly hatched a cynical ploy to corrupt the electoral process in Bloomingburg,” said Preet Bharara, U.S. Attorney for the Southern District of New York. “Profit-driven corruption of democracy cannot be allowed to stand no matter who does it or where it happens.”