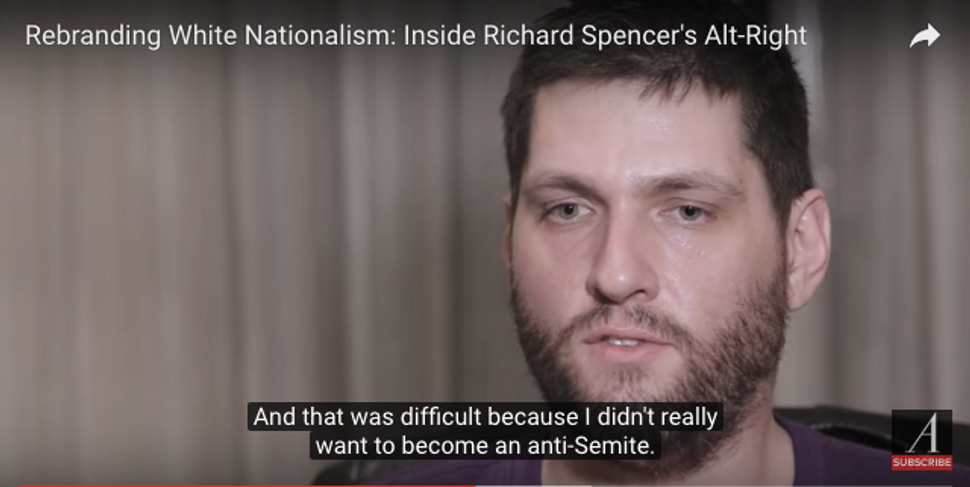 Anti-Semitism is hard to resist, says this ally of white nationalist Richard Spencer, whose nom de YouTube is “Millennial Woes.” Image by YouTube

White supremacist Richard Spencer, who invented the term “alt-right,” tends to steer clear of explicit racism unless he’s directly addressing his followers. But that didn’t stop one of his fellow travelers from sounding off about Jews in an Atlantic documentary about Spencer released this week.

“Two or three years ago, I finally came to understand what is called the Jewish Question. That there are problems with the Jewish people,” said the Scottish blogger “Millennial Woes,” who said he had an epiphany about the world after moving to London and hating the diversity.

He said it was hard for him to come to terms with his anti-Semitism. “I really didn’t want to become an anti-Semite. It’s like the biggest right-wing cliché,” he added.

“Millennial Woes,” who has not been identified by his real name, maintains a YouTube channel. In addition to castigating Jews — for which he has received praise from his elders, like neo-Nazi Andrew Anglin — he has also made negative comments about other groups including women and Muslims.

“Women shouldn’t have the vote,” he said in one video. “Because if you do give them the vote, they will mess up your psychological defenses and your legal systems, your protocols, your culture and make it vulnerable.”