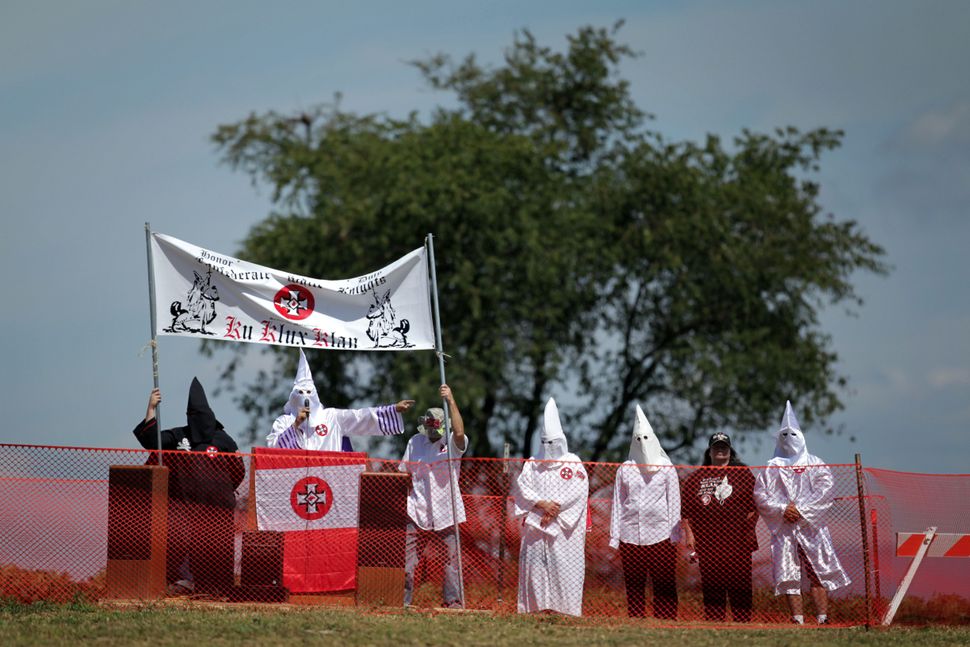 A new documentary series that promises to go inside the private lives of Ku Klux Klan members is drawing instant condemnation on social media.

But the Anti-Defamation League, which is partnering with the show’s distributors, is standing up for the program.

Set to air on the cable channel A&E, home of reality shows like “Duck Dynasty” and “Intervention,” the Klan show, “Generation KKK,” will follow the families of four high-ranking Klansmen.

“We certainly didn’t want the show to be seen as a platform for the views of the KKK,” A&E general manager Rob Sharenow told the New York Times.

In a tweet Sunday morning, actor Wendell Pierce called for a boycott of A&E, accusing the channel of normalizing the Klan.

There should be an immediate boycott of A&E and all of its sponsors as they normalize the KKK with a reality series. Abhorrent

According to the Times report, the show includes scenes in which “anti-hate activists” seek to convince members of the Klan families to leave the white supremacist organization.

In a statement, Greenblatt said that the program was “laudable.” “‘Generation KKK’ explores crucial questions, such as why people get lured into joining racist movements in the first place, and how difficult it can be for them to find a pathway out,” Greenblatt said. “We are pleased to be partnering with A&E Networks on this new series and, as part of the launch, we will be providing resources to the public explaining why hate groups such as the Klan are so dangerous.”

According to the ADL, A&E will run 30-second public service announcements about the ADL alongside “Generation KKK,” and the ADL has given the network resources for “watch guides” related to the show. The ADL will also promote the program on social media, and will direct visitors to a page on its website with resources on the Klan.

A&E’s own press release about the show frames it as an expose on the Klan in which the Klan families make “decisions about their future in America’s most infamous hate-group,” and quotes the ADL.

The documentary comes amid a rise in the visibility of white nationalist sentiment across the United States. Under the new rubric of “alt-right,” white nationalists are seeking mainstream acceptance. Donald Trump’s advisor Stephen Bannon is the former CEO of a website, Breitbart News, that traffics in white nationalism.