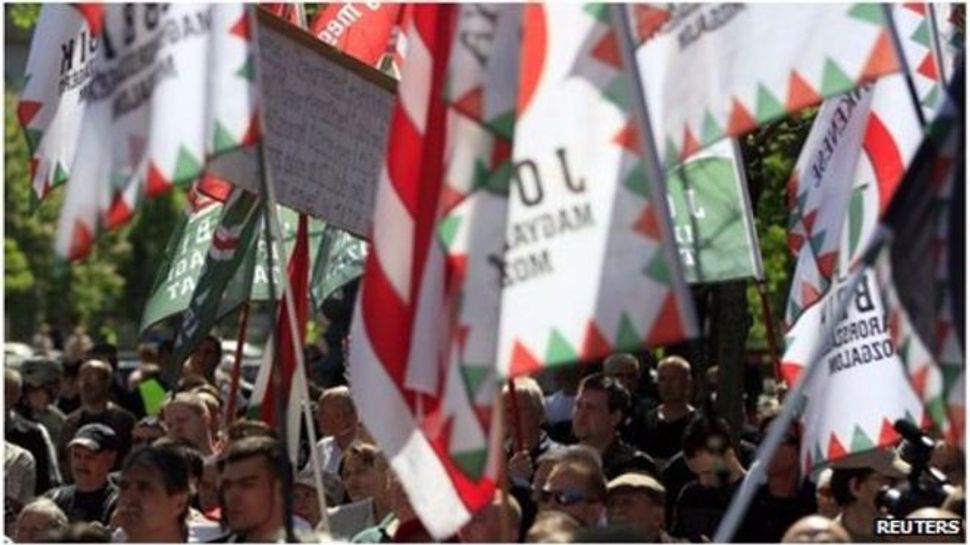 Demonstrators protest the World Jewish Congress at a Jobbik rally in 2013.

Jews around the world are used to local politicians sending holiday greetings during Rosh Hashanah or Hannukah, and the statements often go relatively unnoticed. But in Hungary, a recent Hannukah letter has sparked a firestorm.

Gábor Vona, the leader of Hungary’s far-right Jobbik party, for the first time ever, sent a letter on December 24 conveying greetings to “you and your faith community with respect on the occasion of Hanukkah.” The letter was addressed to Rabbi Slomó Köves, who heads the Unified Hungarian Jewish Congregation, an affiliate of Chabad-Lubavitch.

The missive has sparked deep soul-searching within the Jewish community.

The Jobbik party, and Vona himself, have a long history of open anti-Semitisn. In 2012, Jobbik member of parliament Márton Gyöngyösi publicly said that it is “timely to tally up people of Jewish ancestry who live here, especially in the Hungarian parliament and the Hungarian government, who, indeed, pose a national security risk to Hungary.”

More recently, the party strongly protested Budapest’s hosting of a World Jewish Congress conference, targeting what it said was a Jewish attempt to buy up Hungary.

“The Israeli conquerors, these investors, should look for another country in the world for themselves because Hungary is not for sale,” Vona told the rally, according to Reuters news agency.

Gyongyosi told rally participants that Hungary had “become subjugated to Zionism, it has become a target of colonization while we, the indigenous people, can play only the role of extras.”

In 2010, Vona and several other Jobbik leaders put a kippah on the head of a statue of Mihály Károlyi, who was Hungary’s prime minister during World War I, and a sign in his arms that read: “I am responsible for Trianon.” The public demonstration was meant to communicate that Jews were behind the peace treaty signed in Trianon in 1920, which reduced Hungary’s territory by two-thirds.

For Vona, reaching out to the Jewish community is part of a new political strategy. “Vona wants to polish up his party’s image to make Jobbik acceptable for non-radical voters, especially for voters of the left-wing and liberal opposition parties and undecided voters,” said Bulcsú Hunyadi, a senior analyst at Political Capital, a Budapest-based think tank and consultancy.

In an open letter response to Vona on December 27, Rabbi Köves rejected his holiday message. In his view, it is “more effective to offer these gestures in those circles where up until now hatred, slander and darkness, rather than light, won ground.”

But the far-right party’s friendly gesture to the Jewish community did not spark outrage among all Hungarian Jews. Some members of the community have begun to re-evaluate their stance on Jobbik. On Wednesday, two Hungarian rabbis, a political scientist, and the vice-principal of one of Budapest’s Jewish schools will debate in a public forum where the Jewish community should stand on Jobbik’s gesture of friendship.

The reason for this soul-searching is a broader shift in Hungarian politics. Over the past months some of Hungarian Prime Minister Viktor Orbán’s critics have begun raising the possibility of an alliance between the left and liberal-leaning opposition and the far-right to defeat Orbán in the country’s 2018 elections.

Many Hungarians see Orbán, a right-wing nationalist elected in 2010, as increasingly authoritarian. His ruling party, Fidesz, has passed laws reining in the press and curbing the independence of the country’s courts, among other measures. In fact, some Hungarian Jews—including Holocaust survivor and influential Jewish Hungarian philosopher Agnes Heller—have spoken in favor of a temporary alliance with Jobbik as a way to save Hungarian democracy.