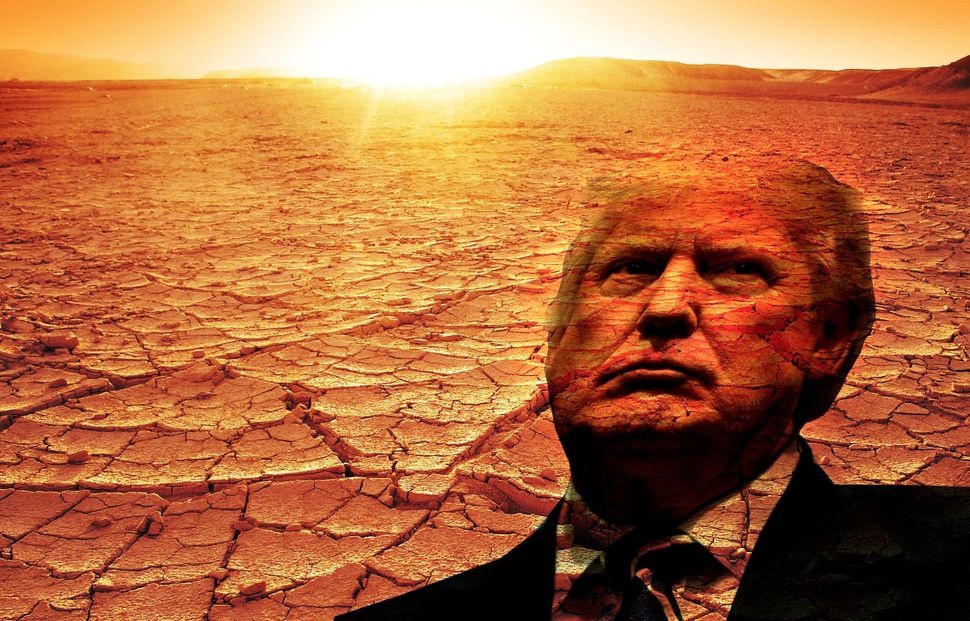 A group of interfaith leaders view Donald Trump’s election as akin to a drought, and are fasting to plead for relief. Image by Nikki Casey

Jews fast on Yom Kippur, the annual day of atonement — but not only then.

The tradition includes age-old and modern instances of fasts called to plead for rain, and one still on the calendar that mourns the assassination of a righteous government official about 2,500 years ago.

Rabbi Burt Visotzky of the Jewish Theological Seminary is channeling that political spirit in his e-mailed call to fast on Inauguration Day.

“There’s a whole tractate (section) of the Talmud that assumes that if there’s been a drought we need to look to our own piety,” he said. “We are in a drought. We are hungry to live in a society that holds the ideals of our founding fathers dear.”

Not every American Jew voted against Trump; he got 24 percent of the Jewish vote, according to the Pew Research Center.

Most Jewish Republicans tend to be Orthodox. They consider Republicans more loyal to Israel, and appreciate the party’s support for parochial education.

But among the liberal mainstream, Trump’s candidacy generated unusually strong feelings of disgust and antipathy, especially as he indulged in race-based generalizations about Mexicans, Muslims and other groups, and gathered support among white supremacists.

“To me it seemed right that I should take this day to discipline myself and deprive myself in response to a new president who has neither discipline nor any ability to deprive himself,” Visotzky said.

Visotzky says he is acting as a private citizen, not an employee of the seminary, in his invitation to colleagues to join him in fasting. But his network of likeminded Jewish and interfaith leaders has lent momentum to the effort. They’ve responding enthusiastically, passed on word of the initiative and created a Facebook page citing the prophet Joel (Solemnize a fast … and cry out to the Lord), according to which more than 100 people had signed up to fast by Wednesday morning.

In the Jewish community, author Letty Cottin Pogrebin, activist and politician Ruth Messinger and Rabbi Amichai Lau-Lavie have all committed to fast.

“Pretty much everybody is saying yes and hitting ‘reply all,’” said Sister Mary Boys, a dean and professor at Union Theological Seminary, who’s planning to fast and attend noon mass in her parish on the day of the inauguration.

“It sort of redeems the day, if it can be redeemed at all, which in my more depressing moments I wonder about,” she said.

Visotzky and his friend and colleague Hussein Rashid, a professor and activist, see the fast and the marches they will participate in the next day as first steps on a long road of action.

Muslims fast to purify themselves, to recognize a lost and to prepare themselves to fight for justice, Rashid said. One of Islam’s fasts, taking place on the tenth day of the month of Muharram, commemorates the assassination of the Prophet Muhammad’s favorite grandson.

He also intended to issue his own invitation to join him in fasting, crafted for a Muslim audience, as part of several activities that will “start on inauguration day and continue into the foreseeable future.”

Rashid is also participating in “American Values, Religious Voices”, in which 100 clergy will write a daily letter to the federal government for the first 100 days of Trump’s presidency, reminding them of the core moral values that unite different faiths, he said.

“We have to organize as well,” said Visotzky. “We can’t just fast. But the fasting is a step on what’s going to be a very long road of educating, advocacy work, making peanut butter and jelly sandwiches. We don’t stand idly by. That’s the ethos of America.”