Amid Wave of Bomb Threats, JCC’s Adjust to a New Normal

The phone at the Siegel Jewish Community Center in Wilmington, Delaware, rang just after 11 a.m. on Wednesday morning. The caller had a message: There was a bomb in the building.

Ivy Harlev, the Siegel JCC’s executive director, wasn’t exactly surprised. The JCC had gotten a similar call the week before. And the center’s staff had already been on the phone with the local police that morning, after hearing that a new wave of threatening calls was hitting JCC’s across the country.

At least 43 bomb threats have been called in to JCC’s across the United States this January. And while no bombs have actually been found, no one is taking any chances.

So Harlev’s staff cleared the few hundred people who were inside the facility, which has two swimming pools, classes for seniors, and an early childhood center, among other amenities.

“There’s people that are frustrated that we even have to be aware of these kinds of things,” said Harlev. “We’re open to everybody, so everybody’s effected. To us it feels like a threat to our community, not just to our Jewish community.”

There was no bomb at the Siegel JCC, and after an hour and a half, the center went on with its day. The kids from the early childhood center were fine. “They had an adventure,” Harlev said. 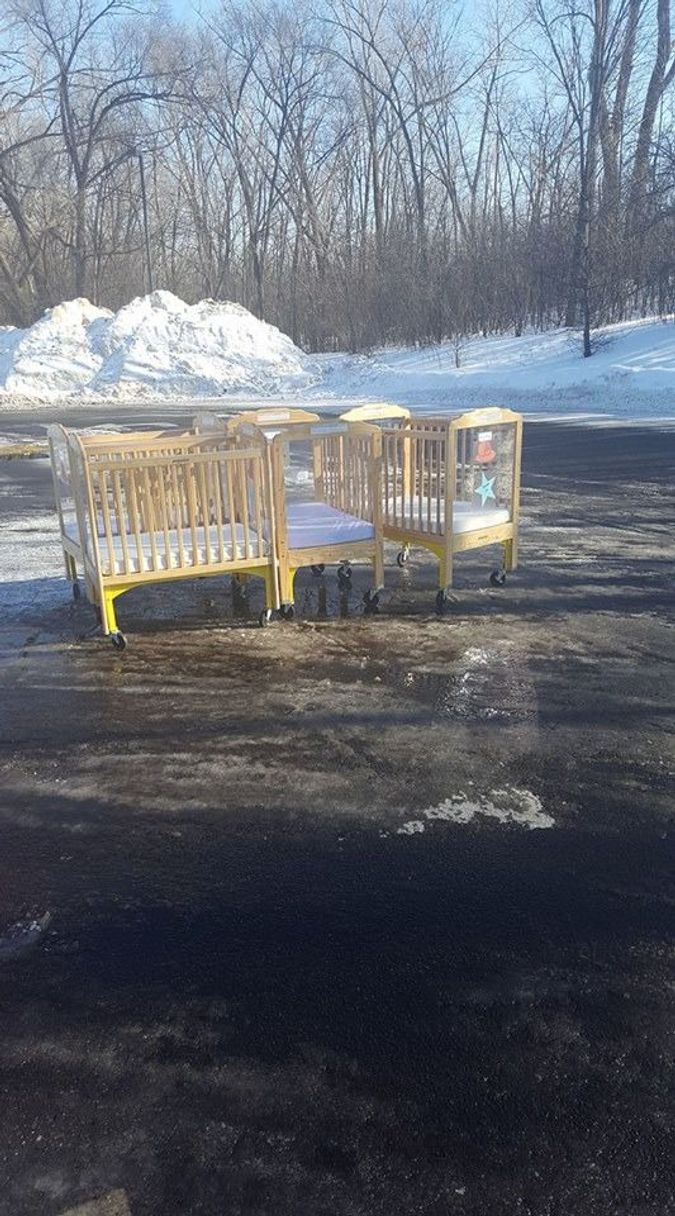 A viral photo of empty cribs outside of the Sabes JCC in Minneapolis after it was evacuated on Wednesday, posted by Facebook user Angie Arnold. Image by Angie Arnold / Facebook

Across the country, the wave of empty bomb threats that hit 27 JCC’s on Wednesday were a frightening reminder of a new business as usual. The threats came just days after a similar wave last week hit 16 JCC’s in a single day.

“This makes three weeks in a row where we’ve seen a number of these, and the number is increasing,” said Elise Jarvis, the Anti-Defamation League’s associate director for law enforcement outreach and community security.

Law enforcement and community investigators do not yet know if all of the threats are connected, or who is behind them. The F.B.I told Reuters Thursday that it is investigating the calls.

At local JCC’s, the calls were disruptive, but not unexpected.

In Baltimore, the local JCC closed for an hour after getting its bomb threat on Wednesday, its second in two weeks. “We felt very prepared for what was going on,” said Paul Lurie, the JCC of Greater Baltimore’s chief operating officer. “Our staff specifically has handled the situation very well.”

At the JCC in Manhattan, Thursday’s evacuation had little impact on programming. “Look, this JCC opened two days after 9/11,” said Rabbi Joy Levitt, the center’s executive director. “Every New Yorker, everybody in the world, has learned how to balance our absolute commitment to our values and our absolute commitment to security, and we live with that reality and that tensions.”

Other JCC’s in areas less accustomed to terror scares are holding community meetings to process the experience. Harlev’s JCC will have a gathering in the coming days for community members to meet with law enforcement.

Both JCC leaders and the ADL’s expert were reluctant to draw conclusions about who is behind the phone calls. No one has taken responsibility for any of the bomb threats. And while recent press attention to online anti-Semitic and white supremacist movements may raise suspicions, insiders are careful to advise against jumping to conclusions.

“I think it is important for there not to be a rush to judgment about what this is,” Levitt said. “I, for one, am not going to make assumptions about where this comes from.”

The ADL’s Jarvis said that the ADL unit which monitors extremist behavior has not picked up any chatter about the phone calls.

Jarvis said that reports about the calls themselves are still sketchy. Some recipients of the calls say they heard a live caller whose voice sounded disguised, while others suspected that the call was some sort of recording.

Jarvis warned that, even though no actual bomb had been found, each bomb threat needs to be taken seriously. “Most often, these are scare tactics used to intimidate the community and disrupt operations,” Jarvis said. But “we need to take each of these very seriously and investigate them seriously in order to maintain the safety of the community.”

Amid Wave of Bomb Threats, JCC’s Adjust to a New Normal