How the Women’s March Found Its Distinctly Jewish Voice 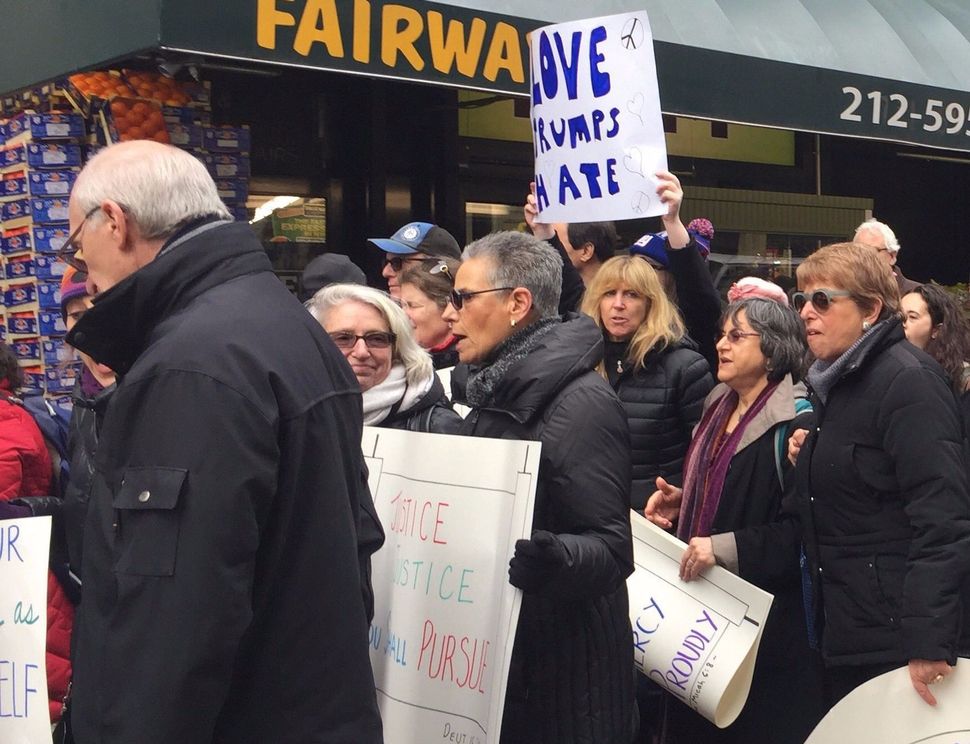 As a thousand people crammed into the ornate, cavernous sanctuary of B’nai Jeshurun on Manhattan’s Upper West Side, and another 400 waited patiently in a line that extended around the block, it was clear that today’s protest organized by women against President Donald Trump had found a distinctly Jewish voice.

Soulful niggunim, those timeless melodies set to ancient verses or sometimes no words at all, filled the synagogue. Rabbis called upon lessons from the Torah to galvanize the crowd. Even the local member of Congress, Democrat Jerrold Nadler, sprinkled his speech with Hebrew phrases.

Of course, this was in the heart of liberal Jewish New York. But the fact that, as one organizer told me, representatives from about 30 synagogues — including the Orthodox one where Jared Kushner and Ivanka Trump attend — took part in this unusual Shabbat morning gathering illustrated both the diversity of the effort and its sense of common purpose.

The participants and the leaders were both men and women, but there was an overt acknowledgment that today’s protest march, centered in Washington DC and magnified in more than 600 cities around the world, was founded, led by and focused on women. It helped that, according to the Jewish calendar, the beginning of the book of Exodus was read in synagogues everywhere this morning. Women often play a supporting role in Biblical stories, or no role at all, but today’s portion contained examples of women with agency and the ability to dramatically change the course of events.

“Enter the ladies,” said Rabbi Joanna Samuels, executive director of the Manny Cantor Center of the Educational Alliance, as she described three examples of women who, in different ways, fought against oppression and violence and set the stage for the redemption of the Israelite people.

There were the midwives, Shifra and Puah, who cleverly resisted Pharoah’s directive to kill newborn Hebrew boys.

There was Moses’ mother, who was determined to bring her child into the world and bravely set him down the river in a basket in the hope that he would live.

And there was Pharoah’s daughter, who used the privilege afforded her to save the child who would eventually grow to be the leader of his people and, arguably, one of the greatest prophets of all time.

“I am holding the stories of these women close to me today and into the future, and I hope you will too,” Samuels said. “Pharaoh’s daughter is inside of us all. Moshe’s mother is our mother. The midwives have taught us well. Let’s get going on the redemption of this nation.”

Rabbi Shai Held, president and dean of Mechon Hadar, affirmed the theme by noting, and repeating, the imperative that “real men” do not degrade women. He also sought to place the day’s events in a larger perspective, explaining how Jewish teaching emphasizes empathy and insists upon action by all — what Held called the radical notion of “the democratization of moral responsibility.”

This gathering was necessitated by a calendric coincidence — the day after Inauguration Day fell on Shabbat. But it also seemed to present an opportunity to frame the opposition to this new presidency, favored by only a minority of American Jews, in distinctly Jewish terms. How that translates into action remains to be seen.

How the Women’s March Found Its Distinctly Jewish Voice