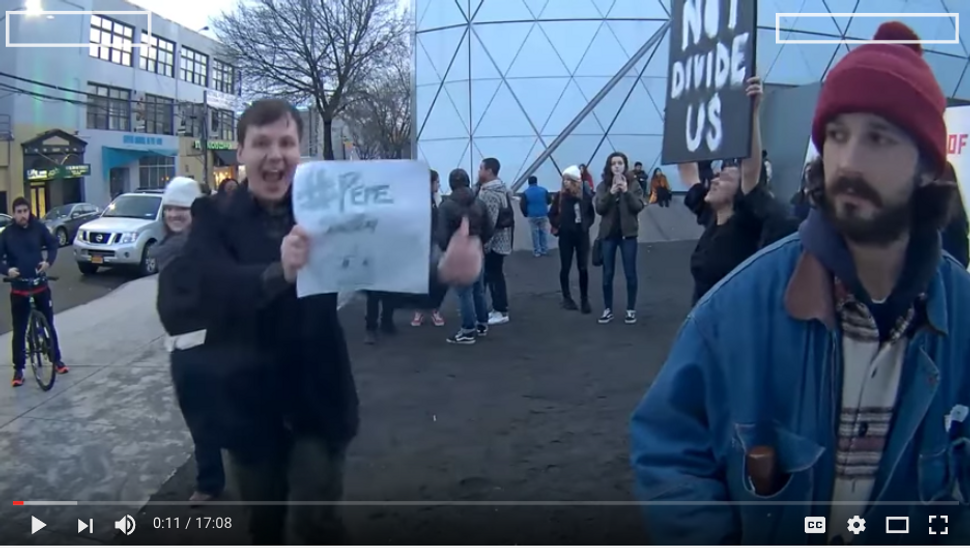 During a live-streamed protest performance organized by actor Shia LaBeouf members of the “alt-right” bombarded the camera, praising Donald Trump and delivering coded messages to fellow members of their white nationalist movement.

LaBeouf, who was born to a Jewish mother and a Christian father, calls his participatory performance piece, “He will not divide us,” a mantra which he and others chant repeatedly on screen and in reference to Trump’s polarizing rhetoric. The performance is housed at a museum in Queens, New York.

But, over the course of three days, 4chan users took advantage of the platform to spread their own, somewhat cryptic, political messages — using coded “alt-right” references and insider language which would be meaningless to an outsider.

4chan is one of a handful of online platforms where the somewhat amorphous “alt-right” movement developed.

For example, a young duo walked up to the camera and held a piece of paper, on which it was written: “#Pepe”

Pepe the Frog is a cartoon icon of the “alt-right” and the Anti-Defamation League has added his likeness to its database of hate symbols.

Another man, his face concealed, spelled out the word “KEK” in red tape on a wall nearby the camera.

“Kek” is another frog figure associated with the “alt-right,” seen as something of an ancient Egyptian relation to Pepe who has divine powers.

Other young men played music on stereos, choosing a 1986 disco song, “Shadilay,” sung by the Italian band named P.E.P.E. Remarkably, the original single design for “Shadilay” features an illustration of a green frog holding a magic wand. This coincidence has made the song into an unofficial theme song for Pepe.

LaBeouf and others congregated at the site sometimes seem unaware of the “alt-right” messages, as they are so obscure.

But one man also approached the camera and recited the opening words of a white supremacist slogan known as “Fourteen words.” In this case, LaBeouf interceded and shouted the man off camera. But not before the disrupter was able to slip in another frog-reference to the camera, shouting “Praise Kek!”