Most Jewish Groups Oppose Trump Order on Muslims, but ZOA Stands in Favor 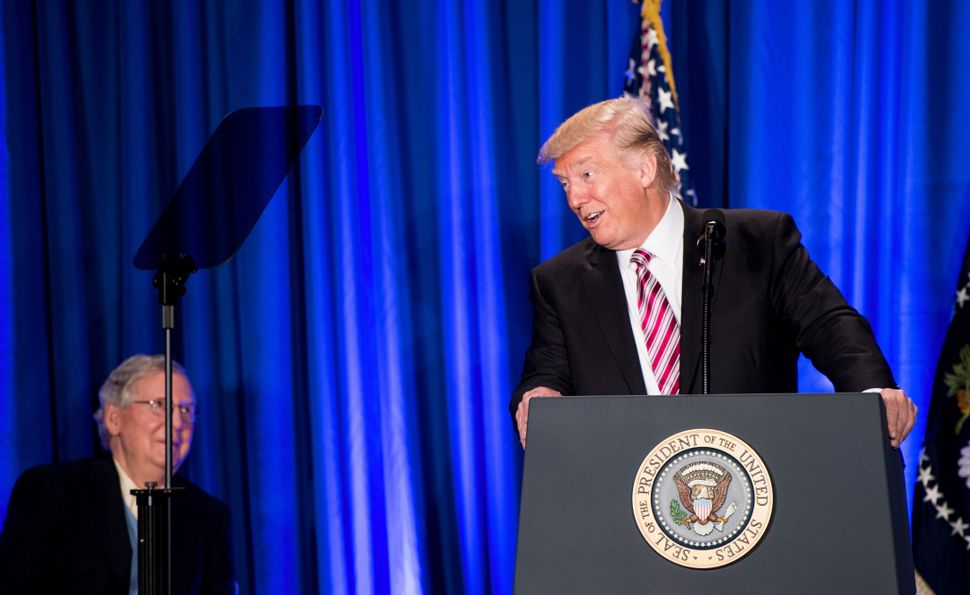 As national Jewish organizations ring alarm bells over an expected executive order that would ban refugees from Syria, some on the Jewish right are praising the new strict limitations.

Mainstream Jewish groups like the Anti-Defamation League and HIAS, as well as left-leaning organizations like the Reconstructionist Movement, the New Israel Fund and Bend the Arc, have issued strongly worded condemnations of the order, a draft copy of which leaked to the press Wednesday.

On the Jewish right, however, the order has found some support.

“We’re opposed to bringing in people who have enormous antipathy toward Jews and Israel,” said Morton Klein, national president of the Zionist Organization of America. “Once they become citizens, they will be lobbying against Israel.”

Klein said he was concerned that Syrian refugees could not be vetted. He raised fears of the Islamic State group infiltrating its members into the United States through the refugee program.

“We strongly support President Trump protecting the security of Americans and Jews by not allowing Muslims whom we can’t vet, and who have disproportionate tendencies towards terrorism, and who are infested with [Islamic State] supporters, to come to America,” Klein said.

The National Council of Young Israel, an umbrella organization that represents a national network of Modern Orthodox synagogues, said in a statement that it supported the notion of strict scrutiny of visitors and immigrants, but not the focus on Muslim counties that characterized the draft order. “The executive order appears to establish strict new visa restrictions solely based on geographic origin,” said the group’s chairman, Robert M. Levi. “We believe that meaningful investigation and examination of individual immigrants and tourists who raise suspicions should be conducted, not limited to point of origin.”

The draft executive order would ban all travel from seven Muslim countries, including Iraq and Yemen, for 30 days. It would end all refugee resettlement for 120 days, and then halve the number of refugees permitted to resettle in the United States each year. It would also place a permanent ban on refugees from Syria.

Trump is expected to sign the order in the coming days.

The ADL, in its statement, called the executive order a “sad moment in American history.”

Most Jewish Groups Oppose Trump Order on Muslims, but ZOA Stands in Favor