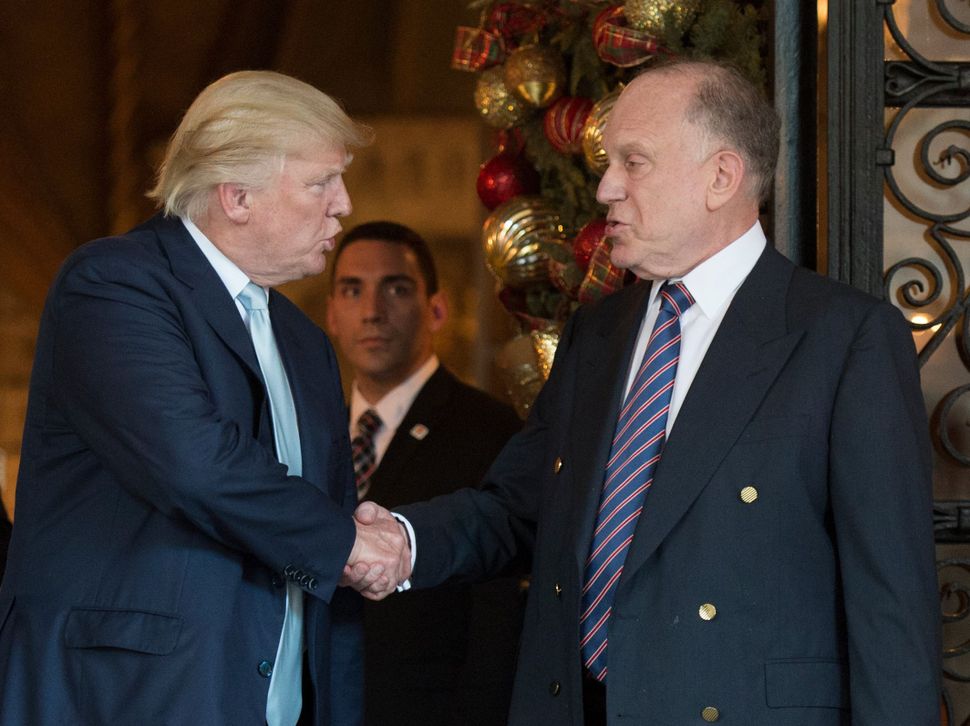 As Jewish leaders rang the alarm this weekend over the White House’s International Holocaust Remembrance Day statement, only one Jewish group stood by Donald Trump’s side.

Ronald Lauder, president of the World Jewish Congress and a college classmate of Trump’s, put out a press release on Saturday accusing critics of the White House’s remembrance day statement of politicizing Holocaust memory.

Yet as the weekend progressed, even Trump’s most staunch Jewish allies criticized the White House statement. Lauder remains the only major American Jewish leader to rise to his defense.

“Any fair reading of the White House statement on International Holocaust Remembrance Day will see it appropriately commemorates the suffering and the heroism that mark that dark chapter in modern history,” Lauder wrote.

The son of cosmetics tycoon and entrepreneur Estée Lauder, Lauder has led the WJC since 2007, when he succeeded another billionaire heir, Edgar Bronfman, as the group’s leader. At the time, the group was in turmoil following a critical report from the New York State Attorney General, a messy defamation lawsuit, and years of internal battles.

Lauder has been a staunch defender of Trump against charges of anti-Semitism in recent months. Both billionaire heirs, the two attended the Wharton School at the University of Pennsylvania together in the 1960s, and have moved in similar social and political circles in New York City.

Lauder and Trump have also done business together: In 2004, Estée Lauder Companies, on whose board Lauder sits, produced a Trump-branded cologne called “Donald Trump: The Fragrance,” which smelled of mint and cucumber.

Lauder’s intervention on the remembrance day statement received little attention until White House spokeswoman Hope Hicks cited it in an email to CNN in response to questions about Jewish criticism of the White House statement.

By Sunday, Lauder was the only Jewish institutional voice defending the White House. Trump’s statement had spoken of the “horror inflicted on innocent people by Nazi terror,” but did not mention Jews specifically.

In an interview on NBC’s Meet the Press on Sunday, White House chief of staff Reince Priebus said that the exclusion had been intentional. “I mean, everyone’s suffering in the Holocaust including obviously, all of the Jewish people affected and the miserable genocide that occurred — it’s something that we consider to be extraordinarily sad,” Priebus said.

Yet while the Nazis killed hundreds of thousands of gays, communists and others in their extermination programs, the Holocaust refers specifically to their attempted genocide of Jews. “The Holocaust was about the Jews,” wrote John Podhoretz, editor of the neoconservative journal Commentary, over the weekend. “There is no ‘proud’ way to offer a remembrance of the Holocaust that does not reflect that simple, awful, world-historical fact.”

While the ADL’s condemnation of the statement came fast, other Jewish groups followed. Both the Zionist Organization of America and the Republican Jewish Coalition issued rare criticisms of Trump, expressing regret about the decision not to mention Jews specifically.

“The lack of a direct statement about the suffering of the Jewish people during the Holocaust was an unfortunate omission,” said an RJC spokesman, according to a JTA report. “History unambiguously shows the purpose of the Nazi’s final solution was the extermination of the Jews of Europe.”

The only public dissent from a major American Jewish leader came from Lauder and his World Jewish Congress.

“It does no honor to the millions of Jews murdered in the Holocaust to play politics with their memory,” Lauder said.

While the WJC does not have the visibility it did in the 1990s, when it led the Jewish communal effort to recover Jewish funds stolen in the Holocaust from Swiss banks, it remains a prominent voice defending Jewish groups overseas.

Lauder has been a constant defender of Trump in recent months. In late December, Lauder said of Trump on MSNBC’s Morning Joe, “There’s not an anti-Semitic bone in his body. He’s a man who believes strongly in Jewish values.”

Days after the MSNBC appearance, Lauder visited Trump at his home in Palm Beach.

The WJC did not respond to a request for comment.