At JFK Protest Against Muslim Ban, Cries of ‘Never Again’ 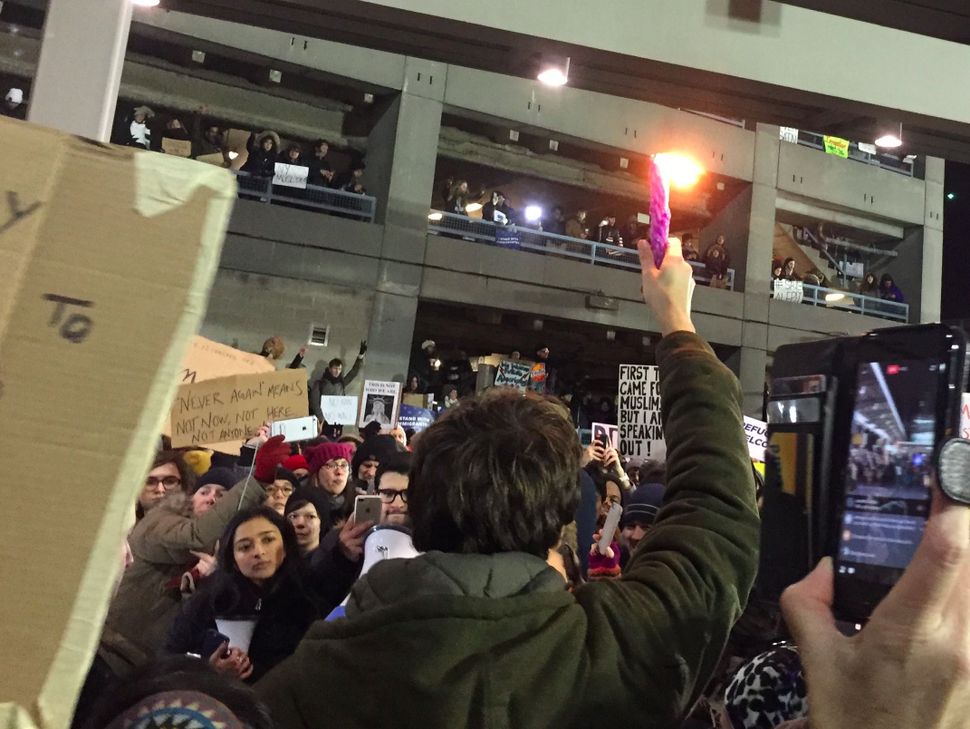 A long day of protest ended in a partial victory on Saturday, as a federal judge ruled that travelers detained at U.S. airports as a result of President Donald Trump’s Muslim ban would not be deported.

Activists cheered the ruling outside the Brooklyn courthouse where the judge signed the injunction, and at John F. Kennedy International Airport, where a crowd had been swelling all day, waving signs proclaiming “Never again.”

“They’re doing to Muslims like they did to us,” said Callan Hetchison, who carried a placard with a yellow star on one side, speaking hours before the injunction was announced. 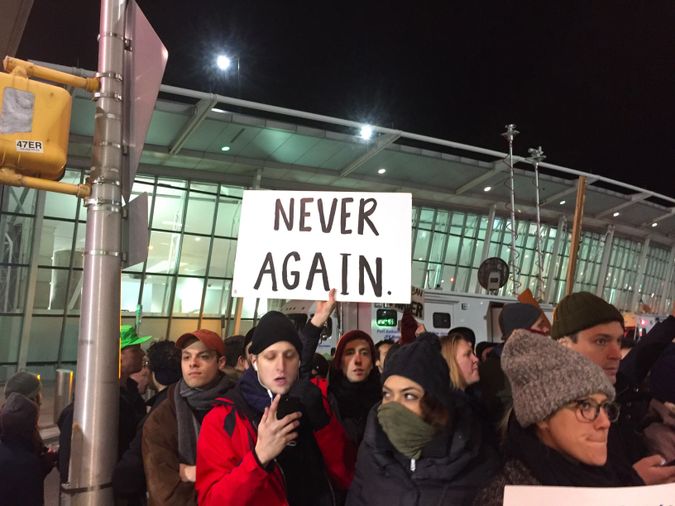 Parallels to the Nazi Holocaust were a persistent theme at the JFK protest, which grew to over a thousand people after viral Facebook posts called for support for travelers from Muslim countries impounded at the airport. Jewish activist groups broke Sabbath rules to share the event on Facebook because they felt that lives were at risk, according to Rachel McCullough, organizing director at Jews for Racial and Economic Justice.

A judge suspended parts of the executive order just before 9 P.M. The fates of the travelers are not yet clear, as the ruling may not immediately pave the way for all of them to be released into the country.

What began on Saturday morning as a small grassroots rally outside of JFK’s Terminal 4 had grown to a few hundred protesters clustered between a parking lot and a garage by 5 P.M.

Within an hour, that crowd had multiplied fourfold. 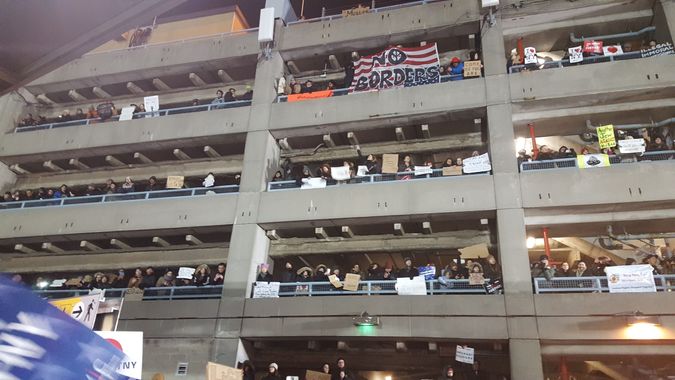 “If ‘never again’ is to mean something, this is a ‘never again’ moment,” said Randi Weingarten, president of the American Federation of Teachers, who attended the rally.

By nightfall, the crowd had spilled across the street and onto the meridian, and business at Terminal 4 was at a standstill. Port Authority Police presence grew as the evening wore on, with a large force guarding the door to the terminal. Police briefly closed off access to the airport’s internal train system to protesters, until New York Governor Andrew Cuomo ordered them to let the protesters through.

Jewish groups, including JFREJ and HIAS, called out members to a 6 P.M. vigil, which began with Havadalah, the traditional Jewish ceremony to end the Sabbath.

“We the Jewish people know what it’s like to be the stranger,” said Rabbi Rachel Grant Meyer, director of community engagement at the Jewish refugee group HIAS, speaking to the crowd. 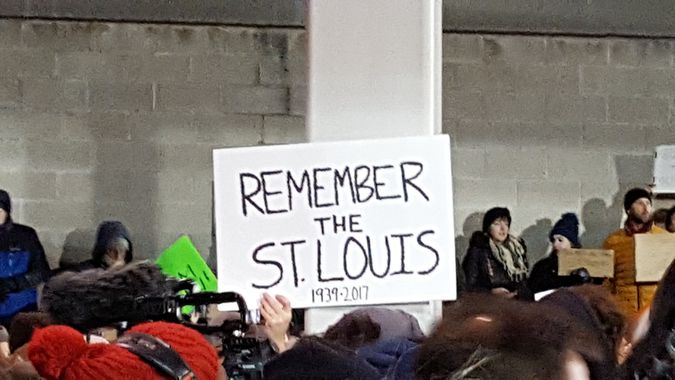 Meyer led the Havdalah prayer, at times struggling to be heard. Protesters continued to chant “Let them in,” the cheer mixing with the prayer to create a dissonant remix.

JFREJ’s McCullough said that her organization had been gearing up for a mobilization against Trump’s first efforts against Muslims. “We have been trying to build the Jewish resistance,” she said.

Still, this protest came together quickly, in a series of rapid text message chains and Facebook posts. 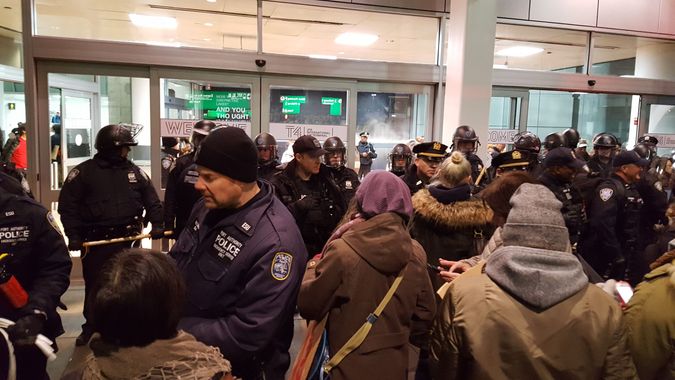 “There are no words to describe how hateful this president is, and how he misunderstands America,” Manhattan Borough President Gale Brewer told the Forward.

“This is a defining moment in our country,” said New York City Public Advocate Tish James, standing beside Brewer. “We have an obligation and a duty to resist.” 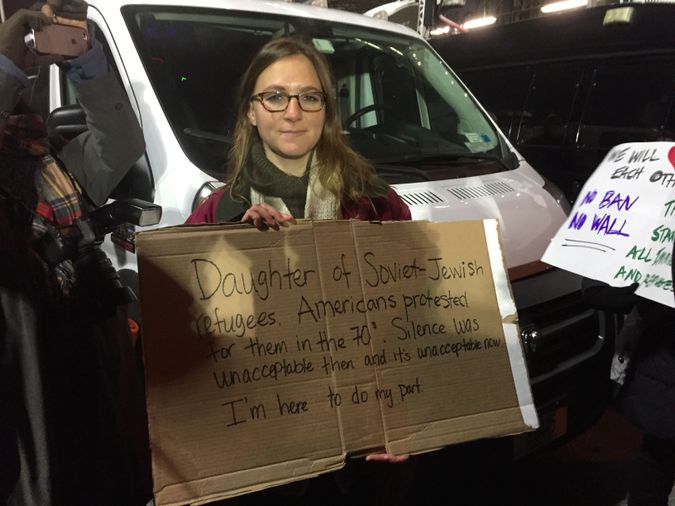 While many protesters reached for Holocaust parallels to describe the depth of their feeling about the executive order, others cited different refugee stories. Elianna Kan, who said her parents were Jews who came to the U.S. from the Soviet Union as refugees, said that she was thinking of the American protests in support of Soviet Jews in the 1970s. “It feels imperative for me to be here,” she said.

“I am outraged at the events since the inauguration,” Kleinbaum told the Forward. She called the executive order a sign of the “encroachment of actual fascism.”

As news of the judge’s ruling reached the protesters at JFK, the crowd burst out in applause.

At Cadman Plaza, outside the federal courthouse where attorneys from the American Civil Liberties Union were presenting their case, the crowd waited silently for news of the judge’s decision. As the ACLU lawyers left the court building, the judge having ruled in their favor, they were greeted with a roaring ovation.

The protest at JFK was still ongoing as of 10:45 P.M., according to social media reports.

At JFK Protest Against Muslim Ban, Cries of ‘Never Again’