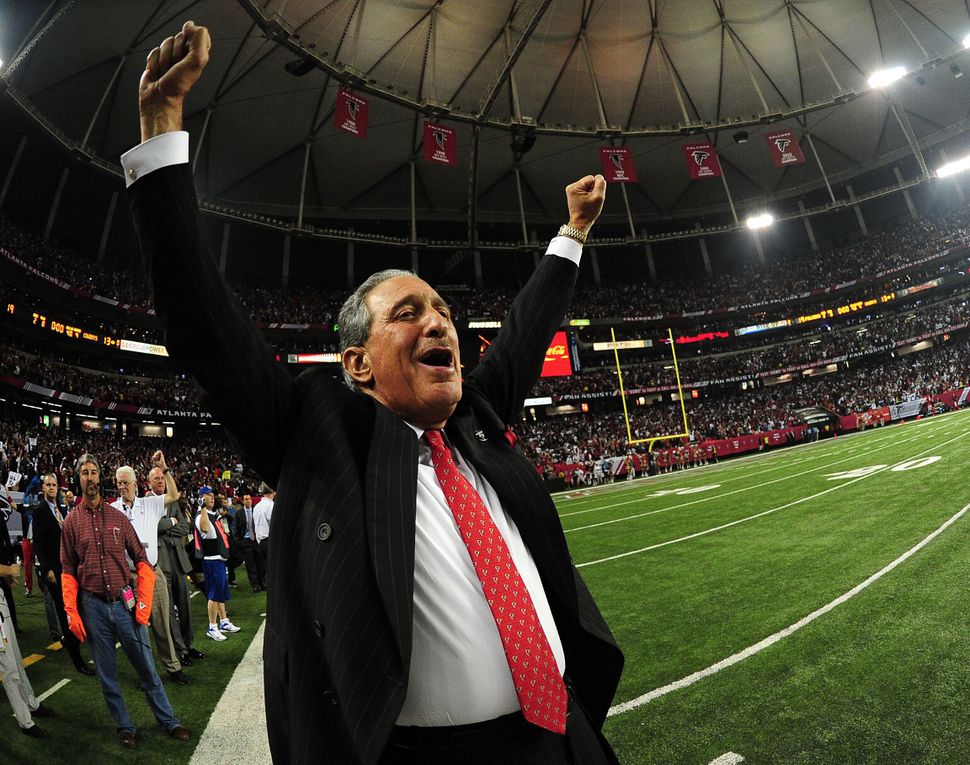 In the 1950s, when Atlanta Falcons owner and Home Depot co-founder Arthur Blank grew up in a cramped one-bedroom apartment in the Sunnyside section of Queens — “My parents slept in a pull-out bed in the foyer,” he recalled — his family still managed to contribute to a puskhe. Jewish families put their pennies and nickels (and maybe even dimes!) in that familiar little charity collection can with a slot. And spare change, the 74-year-old billionaire said, “was a lot of money then.”

Just the other day, he made a national splash when it was learned that every Falcons employee, more than 400 people, would be attending the Super Bowl 51, in Houston, on Sunday, February 5, courtesy of the boss.

The generous gesture should not be surprising to anyone who knows Blank and has followed his career. He said he has tried to make his various business interests worker-friendly, but they learn about sharing as well. He likes to use the term “giving back” in describing his experience as a Jew as well as an entrepreneur.

“I don’t want our associates ever to feel it’s just a job —but that they feel deeply about people they’re serving. And care deeply. They’re giving back. They know that 95% of my estate will wind up back in my charitable foundation,” he said. So in a sense, he has made all those who work for him donors as well.

This will mark the second time in the past six years that Jews own both teams vying for the Vince Lombardi Trophy; Robert Kraft owns the New England Patriots, a perennial AFC power.

Is there something in the Jewish experience that lends itself to this type of success in a business in which less than 1% of all the players are Jewish?

“I’ve thought about Jewish owners of teams,” Blank said. “It’s about success in America. And I think people of our faith seem to do well in things that are connected to other people. This is not a solo effort. I have 31 other partners the day after we play a game. We share revenues. Owners enjoy working together, and that’s part of the history of our faith—working together as a group.”

In reflecting on his Jewish heritage as a marker of his success, Blank, who viewed Donald Trump’s declaration marking Holocaust Remembrance Day as a fumble for not mentioning Jewish suffering, also is inclusive. He cited “the culture values of religion—not just Judaism, but the best of all our faiths, Christianity, Islam, are important to me, important to family.”

He described his grandparents on both sides of his family as having been Orthodox. His own Jewish upbringing leaned toward conservatism, but his family held his bar mitzvah in an Orthodox synagogue and observed the Sabbath.

His family moved to Flushing when he was 12-years-old. From there, he schlepped to Stuyvesant High School in Manhattan and went on to graduate from Babson College (then Babson Institute) in Wellesley, Massachusetts.

Fifteen years later, he and his friend Bernie Marcus — both of whom had just been fired from the home-improvement company they worked for — launched Home Depot. It became the world’s largest company of its kind. He sold it in 2001, and a year later he bought the Falcons.

By then, Blank’s belief in charitable giving had long been set. With wealth, he understood, came responsibility.

“We used to talk about giving back,” Blank explained, speaking of his former business partner, who was also Jewish. “The idea of ‘tzedakah’ — a lot of that came out of our religious orientation. Our grandparents came from Europe. Came from difficult circumstances. Worked long hours.”

Eventually, Blank founded an eponymous foundation with a mission, according to its website, to fund “innovative solutions that enable young people, families and communities to achieve results beyond what seems possible today.” One initiative, for example, The Pipeline Project, provides pre-K through 12th-grade teachers in the Atlanta area “the supplies they need to create great STEAM [science, technology, engineering and mathematics] experiences for children in high-poverty schools.”

“The notion of sustainability is important,” Blank told the Forward. “I believe that the best thing you can do is give people an opportunity so that they can sustain it in their own lives.”

While Blank is charitable, he is also known as famously competitive, arguably a necessity to thrive in the NFL. But he still offered kind words about his rival who will be on the other sideline this Super Bowl Sunday; the Falcons’ owner is grateful for the advice Bob Kraft offered him when Blank was a rookie in the league: “He was the first one who said to me, ‘You built an incredible company. Use the same factors in building a football team.’”

Gerald Eskenazi, who had a 44-year career at The New York Times, is the author of “A Sportswriter’s Life: From the Desk of a New York Times Reporter”(University of Missouri, 2004).